Ok, I admit I was drawn in by the name “10 Hairy Legs.” It’s a name with pizzazz and humor. I was also drawn to attend and review the performance of 10 Hairy Legs in Washington, DC, because of the Super Bowl. I know there are plenty of dance fans who double as NFL fans; however, I’m not one of them. I welcomed an outing to celebrate athletic men dancing rather than running around with a football on Super Bowl Sunday, which almost amounts to an American holiday. Thankfully, my non-football related plans worked out well. 10 Hairy Legs offered an amusing and worthwhile program of contemporary dance, and there was no over-hyped halftime show, nor any silly commercials to have to get through.

I should probably share that according to the printed program, the company 10 Hairy Legs consists of 11 male dancers. That’s more than 10 hairy legs! In addition, some of the men’s legs, at least from where I was sitting, looked anything but hairy. I spied what appeared to be some sleek, shiny shins. At any rate, the name 10 Hairy Legs is indisputedly cute and catchy, even if it’s inaccurate.

What I liked best was the cleverness and uniqueness of many of the works presented. I enjoyed, too, the absence of women on the stage. There’s something special about all-male works, and I generally appreciate them and tend to think there aren’t enough out there.

First on the program was Slapstruck, which based on the laughter and applause it generated  was probably the most popular piece with the audience. Choreographed by David Parker, Slapstruck takes the idea of dancing in a Velcro suit to new heights. I’ve seen other dances involving Velcro, but I think none as successful as Slapstruck, which hits all the right notes. 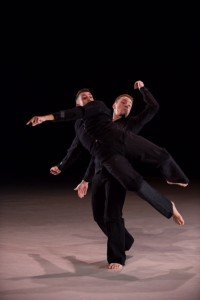 Credit has to be given upfront to the costumes by Jeroen Teunissen of Nuages Gris. When only one dancer was on stage (the work began with just Derek Crescenti), I wondered what the noise was I heard — the thick black costume made odd sounds when it moved. After Jared McAboy joined Crescenti, it didn’t take long before the reason for the noise became apparent. McAboy tapped Crescenti on the shoulder and followed him like a pesky shadow. The two eventually squared off like sumo wrestlers. McAboy jumped atop Crescenti’s back, and that’s when the magic first happened. He stuck there, limbs akimbo, as Cresenti moved about. It was a delightful surprise to witness. A little boy in the audience giggled, and he continued to erupt with giggles throughout Slapstruck.

I suppose Slapstruck amounts to more physical theater than dance, but I didn’t mind at all given the entertainment value. Parker’s choreography takes the Velcro visual jokes anyone would want to see (McAboy completely upsidedown, stuck to Crescenti’s back), and throws in tricks with Velcro you didn’t know existed (a fantastic percussive duel of ripping and tearing). Other favorite gags included getting stuck to oneself (Crescenti, hunched over, struggling to undo, for example, a forearm from a thigh); making waves with chests peeling away and back together again; and jointly wriggling out of long bottoms that are hopelessly hooked together. Velcro fun and sticky human relationships were both fully explored. In sum, Slapstruck is an ideal work for an intimate space, and it was a great way to kick off 10 Hairy Legs’ performance in Dance Place’s cozy theater.

Another attractive and clever work on the program was Heidi Latsky’s SOLO1 performed by Alexander Olivieri. Christopher Ash’s original lighting design has the lights come up before the figure in the center of the stage can be clearly seen. The soloist appears as if in a fog at first. One gathers, slowly, that he is bare-chested, wearing only a black pair of shorts. For almost the entirety of the solo, the dancer’s two feet remain hip-distance apart, facing forward, firmly grounded. His chest undulates, his hips rock up and down and around, his shoulders rise and fall, and a leg straightens and falls into a plié. The music by Chris Brierly is repetitive, as are the movement phrases, and it’s mesmerizing. When the music speeds up, so does the movement. At times, I was reminded of bellydance, so isolated are the circles of the torso from the strongly planted feet. Only toward the end of the work does a foot, in tendu, stretch away for a second. SOLO1 was gorgeously performed by Olivieri, and it’s a striking solo I’d like to see again. 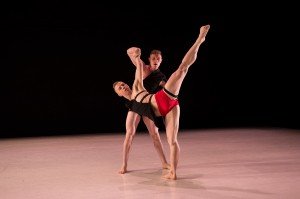 The strength of 10 Hairy Legs in this program was the one solo and two duets. The other duet, Bud, by Stephen Petronio, has some elements in common with Slapstruck, minus the Velcro. The most obvious similarity is that both duets featured Crescenti, who is a dynamic performer with potent stage presence. In Bud, Crescenti was paired with the much physically larger Alex Biegelson. I quickly forgot, however, the size difference. The costumes by Tara Subkoff/Imitation of Christ, realized by Cindy Capraro, are intriguing. Both men wear half a black jacket and bright red tight shorts. The jacketless part of the chest is covered by a few black strips that wind around the torso at attach to the half jacket. The music, Rufus Wainwright’s “Oh What a World,” is a pop ballad, and a sort of sappy one. It seems to explore a happier side of coupledom and friendship than Slapstruck. Biegelson and Crescenti hold hands, their arms scoop around each other, but they dance individually, too, frequently in unison.

The two works for larger numbers of dancers didn’t move me as much. Quadrivium, by Megan Williams, to Steve Reich’s New York Counterpoint, features four dancers, which is unsurprising given the title. Biegelson, Crecenti, McAboy, and Robert Mark Burke danced perfectly well, but I felt I missed what the choreography was meant to convey. Was the work about changing friendships, growing up from childhood to adulthood, both? I liked the circles the men formed and re-formed, their skipping, their occasional coming forward to the front of the stage to stand still and stare, as if to signal a new section and maybe also to signal that what the audience was seeing next was a different memory. My main problem with Quadrivium was that I wanted to understand, and the choreography simply didn’t build in a way that led me to comprehension. It left me uncomfortably wondering. 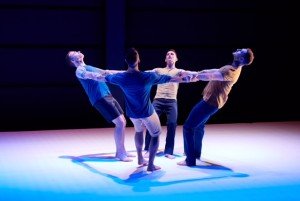 My main gripe about Doug Elkins’ Trouble Will Find Me was that it went on too long. That, and the music by Pakistani musician Nusrat Fateh Ali Khan was too loud. While intended to be intense, I’m sure, the middle eastern tunes pulsed and pulsed and so did my aching ears. I felt like I was captive in a club. In fact, a club may have been the intended setting. The five men (finally, 10 legs!) (Biegelson, Burke, Crescenti, McAboy, and Olivieri) flirted constantly. I admired the manner in which the dancers managed to crawl through entwined limbs. Rather than always lifting a partner, there were fascinating exchanges close to the floor. I also observed some break-dance inspired moves, lots of hands resting on the stage while legs were catapulted upward. At times lyrical, more often Trouble Will Find Me resembled a relentlessly bouncy aerobics class, although one with only men coyly vying to gain each other’s attention. Through glances and even a pinch or quick kiss, it’s clear the men were checking each other out, presumably looking for a love connection.