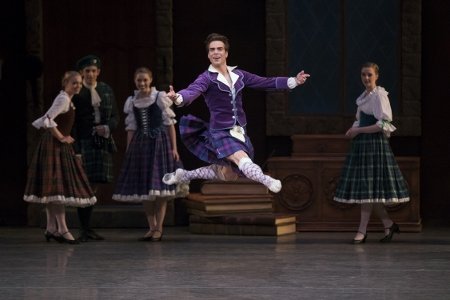 One of my favorite things about seeing a mixed bill is the juxtaposition of two contrasting styles of ballet unified by a common theme. Tonight’s program provided two opposing takes on the broader theme of romanticism.

First on the program was August Bournonville’s La Sylphide, a romantic ballet in two acts. Choreographed in 1836, Bournonville’s version is the only staging that is known to have survived, therefore making it one of the world’s oldest surviving ballets as well as his most celebrated work.

The ballet opens with James (Gonzalo Garcia) dozing in an armchair, a beautiful winged Sylph (Megan Fairchild) kneeling beside him. She dances around his chair and places a kiss on his forehead, rousing him. Although James is to be married to Effie (Brittany Pollack) that day, he is entranced by the Sylph and runs after her.

Fairchild is a perfect little Sylph. Tiny and sprightly with an adorable round face she moves with a girlish coquettishness and floats with an otherworldly grace.  I assume she took extra preparations with her pointe shoes because they never once made a sound on the floor, which added to the illusion of her being a spirit of the air. Garcia attacks his jumps with a vengeance, his legs fire and his upper body air.

As a choreographer, Bournonville resisted many of the excesses of the romantic era ballets in his work. He is noted for his egalitarian choreography, which gave equal emphasis to both male and female roles, at a time when European ballet emphasized the ballerina. Many of his contemporaries explored the extremes of human emotion, while Bournonville, using enthusiastic footwork and fluid phrases, portrayed a more balanced human nature. The guiding principle of the Bournonville method is that the dancer should perform with a natural grace, dramatic impact and harmony between body and music. There is a graceful epaulement, with the upper body usually twisting towards the working foot, to draw attention to and emphasize the movement. Great attention is paid to the shape and placement of the arms. Fairchild’s arms are soft, wafting smoke, delicate and expressive.

The Bournonville method is noted for developing quick footwork, a perfect venue for NYCB dancers to showcase their prowess in the lightning fast, crystal clear footwork that is also a Balanchine hallmark. Almost like an optical illusion, the contrast between the speed of the legs and the grace of the upper body, another characteristic of Bournonville technique, is dazzling to behold. If the legs are the rhythm of Lovenskjold’s score, the arms are the melody, and this evening’s cast of Sylphs joined rhythm and melody beautifully. The dancing tonight was crisp and crystal clear, as one would expect from this jewel of a company.

In Act II, Madge, (Gretchen Smith) the witch scorned by James in Act I, plots her revenge and the Sylph eludes James’ embrace. Smith’s whole physicality is dramatic and dark, her intense focus and robust miming actions portraying a dark intent. In the end, the Sylph accepts the poison scarf Madge made for her and slowly dies as James looks on helplessly, forced to realize that in trying to posses the unobtainable, he has lost everything.

Balanchine’s Tschaikovsky Piano Concerto No. 2 completes the evening, a neo-classical counterpart to the classicism of the first piece. The music regal and robust, the costumes simple and lovely, and the stage bare, the piece is an exuberant display of technical virtuosity, exciting and lively from start to finish. Against a backdrop of tiaraed corps de ballet dancers, principals Tiler Peck, and Amar Ramasar, and soloist Lauren King shone like diamonds. Peck is a raging fire- her passion, daring, and verve burst out of her in a deluge of dazzling technique. She is relentless. Her turns are razor sharp, her footwork dizzying and perfect, the way she shares her love of dancing with the audience genuine and palpable. One can feel the air in the theater grow more charged when she takes the stage. Ramasar is a god. With regal carriage and elegant deportment, he is reminiscent of an old world king. He takes to the air with such ease I think he is going to fly away. As a pair Peck and Ramasar are stunning and perfectly suited. His elegant power and her fire are beautifully complementary, and as a partner he touches her with reverence and tenderness.

This evening’s two takes on romanticism were a delight from a company at the top of their game.