In 2006, for the 250th Anniversary of Mozart’s birth, Lincoln Center commissioned Mark Morris to choreograph a dance for its Mostly Mozart Festival. The suite of three dances, collectively titled Mozart Dances, was met with great praise. This year, to celebrate its 50th Anniversary as one of New York City’s prime summer cultural attractions, Mostly Mozart has brought Mozart Dances back for an encore. Wednesday’s initial performance of the four scheduled was my first exposure to it in its entirety.

Because successful choreography to Mozart is so uncommon, Morris’s effort here is noteworthy – not just because it’s good, which it doubtless is, but because it is.

In comparison to other major classical composers, relatively few of Mozart’s compositions have been choreographed. Even including those pieces he specifically composed for dance (minuets; folk dances; a couple of ballets), in relation to his prolific output the choreographed percentage is miniscule. The Balanchine Trust website, for example, reflects only two by Balanchine (Divertimento No. 15 and Symphonie Concertante). I’m aware of dances choreographed to Mozart by Peter Martins, John Neumeier, Twyla Tharp, Jiri Kylian, and Lar Lubovitch, and I suspect there have been many attempts I’m not aware of. But the relative scarcity only emphasizes how rare successful choreography to Mozart is.

That choreographing to Mozart is particularly difficult seems to make little sense: with the possible exception of Tchaikovsky, his oeuvre is perhaps the most inherently balletic of composers. None of the supposed rationales (e.g.; too complex; too ephemeral; too abstract) survive comparison with other composers whose pieces have similar qualities but have been successfully choreographed. Why there has been such a relative lack of success choreographing to Mozart remains an open question. 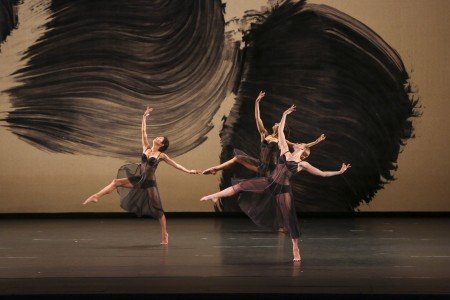 I think Morris provides an answer, although inadvertently. It’s something about the music’s inherent quality of perfection that can make choreography superfluous – because choreography to Mozart almost always is. I recognize that my opinion is a minority, but Morris’s piece, to me, doesn’t add anything to, or provide a new way of seeing, Mozart’s music. And to the extent an emotional response might be helpful, though there doesn’t need to be one, none is created, and none is elicited. As neatly crafted as Mozart Dances is – and of that there is no question – it only reflects, but doesn’t enhance, what’s already there.

Morris does most everything right here. Even though the individual Mozart compositions that Morris has selected are distinct, there’s a sense of balance and unity among the three of them provided by the choreography, the costumes, and the backdrop/sets for each. By that I mean that the piece as a whole contains a structure and balance that in essence mirrors the structure and balance of classical forms. And each section includes interesting-looking movement that is repeated as Mozart repeats musical phrases and patterns, but that rarely becomes repetitious. 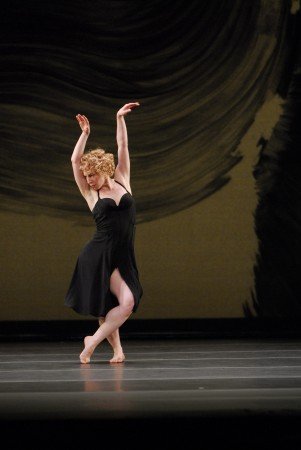 Excerpts from Mozart Dances which provide a good sense of what Morris isdoing are readily available online. Accordingly, I’ll keep my discussion to a minimum. The first of the three dances, titled Eleven, is choreographed to Mozart’s Piano Concerto No. 11 in F. Major (K.413). The stage-spanning backdrop looks off-white with a series of what appear to be dark ‘smudges’ (like wispy fingerprints), and the lighting that illuminates them varies with the particular musical mood. The men are shirtless with dark pants; the women wear black diaphanous skirts covering tops and bottoms, also in black. The lead woman, however, wears an opaque black dress.  (For each of the three dances: scenic design by Howard Hodgkin, lighting design by James F. Ingalls, and costume design by Martin Pakledinaz.)

Eleven begins with dancers spread horizontally upstage.  Then the men separate, move forward, dance together in a not particularly memorable way (arms spread out awkwardly), and then quickly disappear, yielding the floor to the women. The dance’s focus is a curly-haired blonde, Lauren Grant, who moves with a wonderful combination of control and abandon. (In movement quality and presence, she brought to mind Carolyn Adams or Lisa Viola, both formerly with the Paul Taylor Dance Company.) Grant makes the predictable look surprising, and seems never to stop moving. Her performance alone would be sufficient reason to see this program.

Morris has his dancers in Eleven move on and off stage in a constant series of seamless transitions, and the internal choreography is repetitive as Mozart’s music may be considered repetitive – Morris repeats individual movements until he seemingly tires of it, and moves on to another sequence and then another. Once in awhile he’ll introduce a movement that does not immediately repeat, but then returns to it as an echo later. It’s all done quite skillfully. 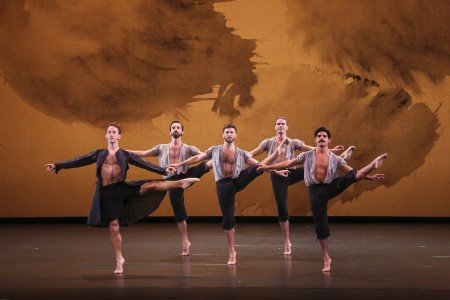 This pattern is repeated in the second and third dances, titled Double and Twenty-seven, to Mozart’s Sonata in D major for Two Pianos (K. 448) and Piano Concerto No. 27 in B-flat major (K.595) respectively, but the appearance is quite different. In Eleven, there is a female lead complementing a female corps, with a brief appearance by the male contingent. In Double, there’s a lead man complementing a male corps, with a supporting appearance by the women. In Twenty-seven, both prongs come together. In Eleven, the color palate (costumes, smudges) is black; in Double, it’s black and white; in Twenty-seven, it’s white (with a smudge or two in red – which struck me as a nod to Balanchine’s “red” ballerina in his otherwise black and white ballet, Symphony in Three Movements). The basic choreographic approach is similar for each dance, but sufficiently different so that each segment looks sufficiently different (e.g., the ballerinas in Double, analogous to the men in Eleven, have subsidiary roles, but are more involved in the piece than the men are in Eleven).

Specific criticisms are relatively minor. The costume for the lead man in Double makes no sense to me at all. Shirtless, but wearing a strange, crooked-looking black cape, he looks like some sort of evil force – except the dancer, Aaron Loux, wears a perpetual smile that makes the cape appear even more irrelevant and out of place. It’s not terribly significant, but it’s distracting. And as much as I like Morris’s repeated use of dancers moving in and out of the wings, either to bracket or highlight a particular musical phrase or to relieve the lead dancer or group as the stage focus, he overdoes it in Twenty-seven, to the point that I got annoyed at seeing dancers constantly moving on and off stage. 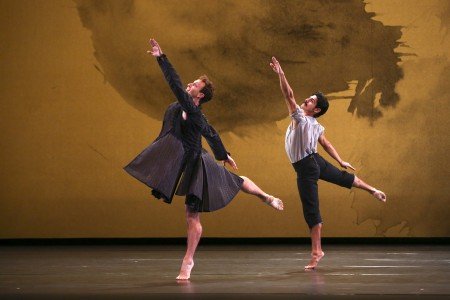 But the most significant difficulty I have with it is that inventively put together as it is, Mozart Dances is a collection of steps without any reason for being beyond looking good and appropriately replicating the music visually (admittedly no small accomplishment). The steps have no independent purpose.

I don’t mean the absence of “meaning” in the sense of a plot or story or simple emotional gloss. Of course there’s nothing inappropriate about not grafting “meaning” onto music that doesn’t demand it. Nor is it a failing that for whatever reason the piece doesn’t lift me out of my seat – metaphorically, of course. It’s nice when that happens, but it’s not a prerequisite for great choreography. I mean choreography that adds something.

An example of what seems missing to me might be found by comparison with Balanchine’s Agon. I’ve written before that the ballet, though an acknowledged masterpiece, is something that I appreciate but not more because there’s nothing in it that moves me; that involves me kinetically or vicariously. Nevertheless, the choreography itself is so dramatic that it encourages the viewer to see Stravinsky’s music differently from just hearing it played. That it doesn’t “mean” anything (aside from a measure of unemotional emotional gloss in the pas de deux) isn’t significant either. But Balanchine’s choreography enhances the music and modifies one’s perception of it. 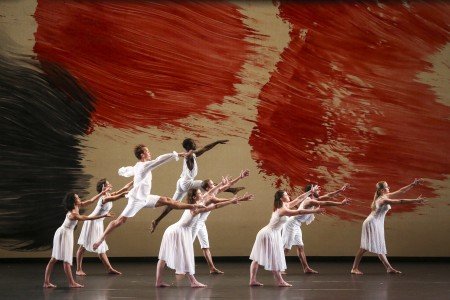 Granted, the comparison is a little like apples and oranges. Mozart’s compositions here – certainly the ones that Morris has selected – are more filigree and ephemeral sounding than the Stravinsky; simple in their complexity, and somewhat effervescent. But that’s the point. Mozart Dances matches that sensibility, but doesn’t take it to a different level. And perhaps no choreographer – with rare exception (like Divertimento No. 15) can add anything to Mozart without changing it detrimentally. So reflecting it, perhaps, with the choreography being an adjunct to the dominant music, is the best that can be hoped for. And why successfully choreographing to Mozart remains so elusive.

What was particularly transcendent about this performance, however, was the playing of the music itself by the estimable Garrick Ohlsson on piano (joined, for Double, by Inon Barnatan), and by the Mostly Mozart Festival Orchestra, conducted by Louis Langree.

In any event, Mozart Dances is a fine example of contemporary choreography, and an equally fine example of Mark Morris at his best. That it disappoints by not being a more lofty piece of work is unfortunate, but it provides a pleasant evening of Mozart, and of dances that ingeniously reflect Mozart’s music.