Jonathan Watkins has won admirers for his creations with the Royal Ballet School, Ballet Black and companies as far apart as Ekaterinburg and Manila, and for movement direction in drama. Nevertheless, an evening length work for a major company is a daunting prospect for a young choreographer. David Nixon had commissioned Watkins for Northern Ballet’s Jubilee celebration, so had a clear idea of what he could achieve, but entrusting a major project like 1984 certainly involved some risks – they have paid off handsomely. 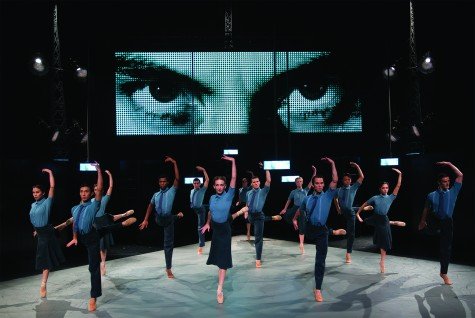 1984, the chilling story of political propaganda carried to ultimate extremes, was germinated by George Orwell’s persecution in the Spanish Civil War for being a member of Poum, the “wrong” anti-fascist group fighting Franco. His left-wing soldier colleagues were even called fascists by the Stalinists and many were executed. Watkins writes that he has been fascinated by the novel since his teens and relished the opportunity to stage it as a ballet.

The central character, Winston Smith, is a propagandist for the Ministry of Truth who harbours dissident thoughts and we see him first in a junk shop, buying a notebook to keep a forbidden diary, egged on by the shopkeeper. Later he buys a lovely paperweight from a time before beauty is forbidden by Big Brother, the omnipresent symbol of the government of Oceana. The grey scenes of this drab, future London could have resulted in tedium for the audience, but this is overcome by the dual purpose screens both watching the population and bombarding them with propaganda. Andrzej Goulding, the video designer has triumphed with a collection of images of history being rewritten by the Ministry of Truth, visually compelling abstract designs and the sinister features of Big Brother himself. Combined with the evocative stage designs of Simon Daw and the atmospheric lighting of Chris Davey, 1984 is an original visual feast.

Without the use of text, it’s dance that has to carry the story and Watkins uses a variety of styles to retell the story. Smith and his co-workers go about their office tasks like automatons and their powerful ensemble dances, feature exercise like steps which reminded me of the images Dr Bode’s mass gymnastics for Hitler. In contrast, Smith on his own has movement illustrating his melancholy and anxiety, always looking over his shoulder, with good reason – Big Brother is watching you! The character is reborn when he meets Julia and Watkins choreographs two romantic pas de deux either side of the interval. In the first, after secretive, tentative messages, they meet in a forest to consummate their clandestine affair; there is hunger and passion as they leap on each other with years of sublimated emotion thrust aside. In the second, they are lovers already with intimate knowledge of each other and comfortable while still anxious for the risks they are undertaking. 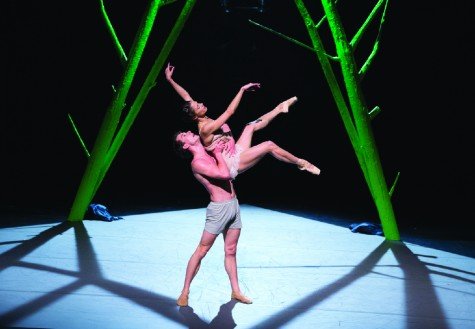 Watkins and dramaturge, Ruth Little, have made an effective summary of Orwell’s plot. The exception is the scenes with the Proles, the underclass who represent Smith’s hope for an uprising, as they are largely ignored by the thought police. While their sloppy brown dress and chaotic steps provide a contrast to the military discipline of the Party, we see too little of them to make an impact on the plot and the appearances from time to time of a solo prole woman as a symbol of Smith’s revolutionary hopes probably left many in the audience puzzled. The final stages with Smith’s arrest, torture and the breaking of his spirit provide few opportunities for memorable dance, but advance the narrative effectively.

The tuneful score by Alex Baranowski provides all the ingredients required by the plot: the slow, sad music accompanying Smith’s lonely life; bombastic vigour for the ensemble office scenes and soaring melodies for the love scenes.

The Northern Ballet dancers approach their roles with relish, fine dancing and accomplished acting. As Smith, Tobias Batley convincingly encompasses the varied aspects of the role with a beautiful line, strong jumps and an impressive stage presence. In the romantic duets, Batley and Martha Leebolt make the sparks fly with Leebolt often taking the lead with explosive jumps into Batley’s arms. Leebolt also makes the most of the distinctive, passionate lifts Watkins has crafted. As O’Brien, the senior man in the Ministry of Truth, Javier Torres sums up the power of the party, with a commanding performance: resolute, sly and uncompromising in the final scenes. Hironao Takahashi as Mr. Charrington, plays the venial junk shop owner and is convincing in his initial support and later betrayal of the lovers.

Earlier this week, 1984 deservedly won the Dance prize at the 2016 South Bank Sky Arts Awards, beating the Royal Ballet’s much praised Woolf Works. 1984 deserves to be seen far and wide not only as a fine example of Gesamtkunstwerk (total theatre), but also as a reminder of the risks of state power taken to extremes.