Just as Covid restrictions appear to be slowly easing, major dance organizations are manifesting ways to cope with it with it beyond online classes and Covid-catered programs. And because of the sheer breadth of internet access, it may not only be an adjustment: it may become part of the new normal.

In the New York area, locally-based major dance companies and venues have scheduled a plethora of digital programming. This article will only focus on the most familiar ones, but nearly every company and venue has unveiled interesting-looking plans for the near future and beyond.

Anyone with internet access and an interest in dance is well-aware that Youth America Grand Prix, the world’s largest international ballet competition and scholarship program, has been holding events seemingly in every nook and cranny of the U.S., as well as in an abundance of locations beyond, in the process providing the young dancers an opportunity to appear and perform on stage – albeit with pandemic restrictions in place. This not only benefits the competitors; it enables the online viewing public to see them either via live-stream or selected highlighting on social media from many of the world-wide events. The organization’s 2021 Season, scheduled to include 13 countries and 22 cities in the U.S., is already half completed.

Components of YAGP’s competitions in major venues and following its annual New York City Finals have usually been one or more celebratory galas. This year, YAGP has scheduled an online gala. On March 31 (and available for several days thereafter), YAGP will present a Virtual Gala that includes one World Premiere as well as performances by young international ballet stars.

The World Premiere is choreographed by American Ballet Theatre Soloist and YAGP alumnus Gabe Stone Shayer, performed by Shayer and YAGP alumna, ABT Principal Dancer Skylar Brandt. Shayer choreographed this piece as part of YAGP’s Emerging Choreographer Series, which in the past has featured works by Camille A. Brown, Marcelo Gomes, Adam Hougland, Susan Jaffe, Justin Peck, Derek Hough, Juliano Nunes, and Melanie Hamrick, among others.

Noteworthy as well is that Shayer’s piece was created to a commissioned score by Matthew Whitaker, a 20 year old blind pianist and composer who graduated from The Julliard School, and who was recently featured in a 60 Minutes segment. Reportedly, the piece embodies the life of a New York-based artist. 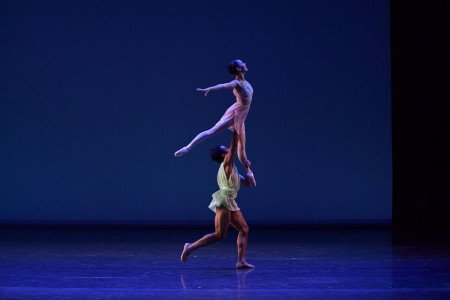 Also noteworthy on the program will be two pas de deux performed by stars from the Mariinsky Ballet, three of whom are  relatively new members of the company who have already risen to international star status. Maria Khoreva and Kimin Kim (a YAGP Alumnus) will perform a duet from Le Corsaire, and May Nagahisa and Victor Caixeta (both YAGP Alumni) will perform a duet from Romeo and Juliet.

The program will also include a compilation of the best performances from worldwide participants in YAGP’s 2021 Season to date.

American Ballet Theatre returns to City Center for what’s billed as “ABT Live from City Center / A Ratmansky Celebration” on March 23 (and is available on demand through April 18). Celebrations of the work of Alexei Ratmansky, ABT’s Artist in Residence, are nothing new to ABT, but this one has a few interesting hooks.

Originally scheduled to debut as Aurora in The Sleeping Beauty during ABT’s cancelled Met 2020 Season (along with other scheduled role debuts), ABT’s ubiquitous new Principal Dancer, Skylar Brandt, will open the program with one iconic component of that role: “The Rose Adagio,” accompanied by Aran Bell (The Spanish Prince), Patrick Frenette (The English Prince), Blaine Hoven (The Italian Prince), and Tyler Maloney (The Indian Prince). The program will conclude with a Ratmansky World Premiere: Bernstein in a Bubble, inspired by the American spirit of Leonard Bernstein’s Divertimento, and choreographed in a quarantined bubble residency in upstate New York. The piece features performances by Brandt, Catherine Hurlin, Cassandra Trenary, Bell, Frenette, Hoven, and Maloney.

Sandwiched in between are two excerpts from larger Ratmansky pieces: the second movement from Seven Sonatas, with Luciana Paris, Devon Teuscher, Herman Cornejo and Carlos Gonzalez; and a pas de deux from The Four Seasons (Autumn) featuring Isabella Boylston and James Whiteside.

New York City Ballet is facing a mountain of imminent change: Maria Kowroski and Ask la Cour are retiring at the end of the company’s Fall, 2021 Season; Gonzalo Garcia will retire during the company’s Winter, 2022 Season; and Lauren Lovette has just announced that she will be leaving the company. All four are company Principals. But these changes and the imminence of the company’s anticipated return to live performances [NYCB’s performance schedule for 2021-2022 is already available on its web site] has not deterred it from providing a plethora of virtual opportunities this Spring, including its own Virtual Gala; a World Premiere by Kyle Abraham and another by Justin Peck; its Inside NYCB and Performance Stream series, some of which, unfortunately, have already begun or will soon be completed; and a stream of complete performance of Vienna Waltzes.

The Spring “Inside NYCB” series and Performance Stream Series. Hosted by Principal Dancer Russell Janzen, the Inside NYCB series will feature onstage rehearsal sessions and conversations with NYCB artists and repertory directors, offering access and insights into each week’s featured ballet. The Performance Stream Events will present previously recorded performances of that week’s ballet.  Access to each of them is free, although donations are greatly appreciated.

The schedule is as follows: 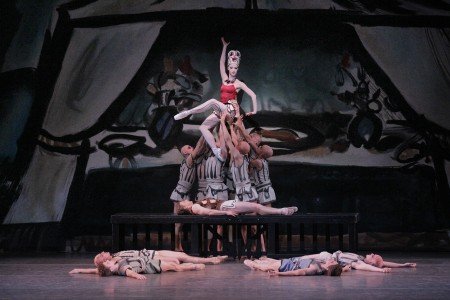 Abraham World Premiere. Kyle Abraham will be choreographing his third piece for NYCB during the Spring at the company’s residency at the “bubble” at Kaatsbaan (in upstate Tivoli, NY). The ballet will be recorded live at the David H. Koch Theater at Lincoln Center, and will premiere on April 18, with access available through April 22.

Virtual Spring Gala / Peck World Premiere. On May 5, the company’s first-ever virtual gala will be take place, highlighted by a World Premiere choreographed by Peck, NYCB’s Resident Choreographer. Peck is creating a solo for Principal Dancer Anthony Huxley to a string quartet arrangement of Samuel Barber’s Adagio for Strings. The event will also include excerpts of ballets by George Balanchine and Jerome Robbins newly filmed for the occasion.

Following the Gala, the event will be available for viewing from May 6 through May 20.

Vienna Waltzes Special Event. Beginning on June 3, the company will conclude its Spring 2021 Virtual Season with a performance of Balanchine’s Vienna Waltzes. This rendering was filmed in 2013, and includes performances by Krohn, Tyler Angle, Megan Fairchild, Huxley, Erica Pereira, Sean Suozzi, Reichlen, la Cour, Kowroski and Jared Angle in the principal roles. The streaming will be available through June 17.

Hot on the heels of its virtual Spring 2021 Season, Dance Theatre of Harlem has scheduled a special event on March 13 commemorating DTH’s landmark 1982 performances of Stravinsky’s Firebird.  Titled “Firebird Day,” the event, hosted by DTH Artistic Director Virginia Johnson and its Executive Director Anna Glass, also recognizes Women’s History Month with a celebration of the women involved in the making of DTH’s Firebird production as well as African-American ballerinas in general.

The day’s series of events begins at 4 p.m. and concludes with an On Demand performance beginning at 8 p.m. The complete schedule is as follows: 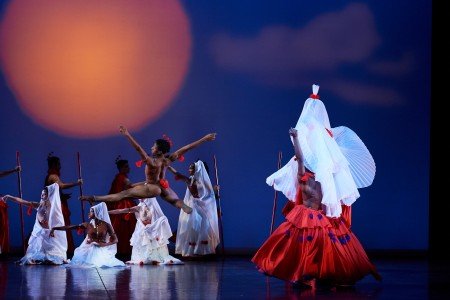 This segment includes the 1982 PBS documentary, “Stravinsky’s Firebird by Dance Theatre of Harlem,” which takes viewers behind the scenes of the DTH’s preparations to perform the piece at the Kennedy Center, and features interviews with DTH co-founder and former New York City Ballet Principal Arthur Mitchell, John Taras, who choreographed Firebird exclusively for DTH, Geoffrey Holder, who created the piece’s costumes and sets, and former DTH Principal Dancers Stephanie Dabney, Donald Williams, and Lorraine Graves.

The program (originally scheduled for February 27) will be available for viewing from March 13 through March 28 at midnight via DTH On Demand. Access is free, but donations of any amount would be greatly appreciated.

New York’s venerable Joyce Theater has announced its Spring 2021 Digital Season. From February 18 through June 23, it will present its usual unusual assortment of companies that span the spectrum of dance.

The season opened with Ronald K. Brown / Evidence performing solos and duets from the vast repertoire created over the company’s 35-year history (availability continues through March 4), and concludes on June 10 (availability continues through June 23) with Ballez, a company that reportedly brings female and non-binary voices and talents to the forefront. In its Joyce debut, Ballez will present the World Premiere of Giselle of Loneliness, a 21st century take on the classic that champions the voices and experiences of marginalized performers in ballet.

In between, the Joyce’s virtual programming includes a streaming of a Paris Opera Ballet performance of Rudolf Nureyev’s Swan Lake (March 11-24); flamenco artist Israel Galvan’s Maestro de Barra, which reportedly is choreographed to the “sounds” he’s heard in world-wide public spaces (March 25 through April 7); Step Afrika!, a company that is dedicated to the tradition of “stepping,” will present STONO, a dance that honors the spirit of resistance and activism of their enslaved ancestors (April 1 through 14); a world premiere by tap dancer Ayodele Casel (April 8 through 21);  Ephrat Asherie and her company return for an encore performance of Odeon, a mash-up of breaking, hip-hop, house, and vogue, set to a score by Ernesto Nazareth (April 15 through 28); Parsons Dance returns with the World Premiere of choreographer Chanel DaSilva’s On The Other Side, as well as company classics (April 23 through May 5); Trisha Brown Dance Company returns with five dances that survey the choreographer’s initial explorations with movement invention (April 29 through May 12); a return visit by Limón Dance Company with a program that includes company classics The Moor’s Pavane and There Is a Time, as well as its 2020 co-commission from American Dance Festival, Chafin Seymour’s Suite Donuts (May 6 through 19); the Stephen Petronio Company will present four dances, including two choreographed to songs by Elvis Presley (two versions of a new duet, Are You Lonesome Tonight, and a Petronio solo from 1993 titled Love Me Tender) (May 13-26); tap dancers Dormeshia, Jason Samuels Smith, and Derick K. Grant return for the 4th annual Tap Family Reunion presenting the world premiere of The Mayor of Harlem, a look into the life of Bill “Bojangles” Robinson (May 21 through 25); Batsheva Dance Company returns with YAG, its first production conceived for the screen, choreographed by Ohad Naharin (May 27 through June 2); and RUBBERBAND, returning with Vic’s Mix, a remix of company founder and choreographer Victor Quijada that reflects on the creative territory explored during the company’s nearly 20-year history (June 3 through 16).

More detailed information can be found on the theater’s website: www.joyce.org

These programs represent only a fraction of digital events taking place in Spring 2021 presented by companies and venues in and around New York.

One wonders whether, when live performing returns, whether streaming, live or otherwise, will continue as a supplement to in-person performances. Even though there’s no substitute for a live performance, bringing world-wide dance to a world-wide audience would be enabling for performing artists and audiences, and fears of a reduction in live performance ticket sales may be unwarranted: it hasn’t hurt live attendance at sporting events. Having often thought: “if only I could have been there,” whether the “there” is San Francisco, St. Petersburg, or Sydney, would be a thought of the past. Just a … thought.