I see a lot of dance in Washington, DC. With all the dance riches in the city, I often overlook performances a little further afield. When I saw an advertisement about a program combining juggling and ballet, I perked up. As someone who regularly attends dance performances, something different in the dance realm is appealing and stands out. The juggling twist was enough to pique my interest and prompt me to travel to Maryland.

So, what exactly was I agreeing to see? I wasn’t sure. The mystery was part of the attraction. Would it be circus-like or would ballet choreography predominate? Would I like it?  I can now answer those questions.

4 x 4: Ephemeral Architectures, as promised, combined juggling and ballet.  The combination featured four jugglers and four dancers (hence, I suppose, the “4 x 4” in the title).  Yet the dancers (from the UK) did some juggling, and the jugglers (members of Gandini Juggling) did some dancing. And the five musicians, the wonderful DC-based rogue collective (RC), even got in the game a little bit. During a section in which the dancers and jugglers playfully called out the names of colors, the musicians stood up and announced that they would take a turn. They, too, shouted out names of colors (green, white, yellow). The audience broke out into joyous hoots and cheers, however, when one of the musicians placed a pink “pussyhat” on her head and said, “Pink.” These hats were a symbol of the Women’s March in Washington, DC, that was held the day before, and it was clear from the response that the patrons overwhelmingly supported the marchers. 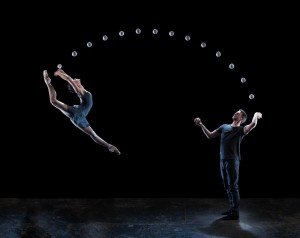 World renowned juggler Sean Gandini serves as the director of the work, which was choreographed by Royal Ballet dancer Ludovic Ondiviela, with an original composition, Suspended opus 69, by Nimrod Borenstein.  Guy Hoare supplied the lighting design, and Emma Lister, who is one of the dancers, is listed as the artistic coordinator. (Interestingly, Lister is the granddaughter of former American dance scholar and critic Olga Maynard.)

All of the artists shared the stage generously. For most of the hour-long performance, the dancers and jugglers interacted as a large ensemble. It was rather dizzying at times trying to watch both the juggled objects flying in the air and the ballet dancers moving under them. I simply resigned myself to the fact that it was nearly impossible to take it all in at once, and so I concentrated alternately on whatever caught my eye. Sometimes I followed rings flipping higher and higher like bubbles floating up into the sky.  Sometimes I followed the elegant arms or feet of the dancers weaving amongst the tossed airborne circles. My eyes might have crossed a couple of times! Neither the juggling nor the dancing seemed extraordinary, but together the mashup was intriguing and enjoyable. 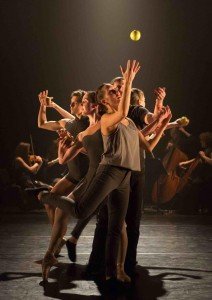 Much of the choreography focused on shapes and patterns, and that makes perfect sense given the inherently geometric nature of juggling and ballet. In fact, the two arts forms have much in common, and 4 x 4 effectively highlighted those commonalities. Both juggling and ballet require great discipline, precision, timing, and physical fitness. Rhythm is essential to both as well. Is it possible to execute pirouettes with balls being thrown all around you, coming within inches of one’s head? Yes, but only because of the joint skill of the dancers and jugglers.

In one particularly lovely section, the jugglers spun their clubs on the ground.  The clubs resembled circulating petals. Then the dancers arched over the jugglers’ bent backs. It was a unique picture of beauty. Dancers also got involved in manipulating the jugglers’ props. They passed balls between their long legs. They had rings put above their heads like halos. One dancer had a tutu made of rings held by the jugglers, another dancer had a set of wings made from the rings.  The creativity was strong.

The dancers and jugglers, who wore simply pedestrian costumes in shades of gray, frequently vocalized. They talked (with accents, and in languages other than English sometimes). Some squeaked. At times, they narrated their actions. The extent of the chattiness was odd, but not off-putting. 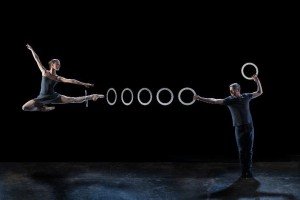 On balance, the performance was more artistic than circus-like. It felt like a fun experiment. While the mixture of juggling and ballet didn’t thrill me, I admit the performance charmed me. There was an appealing simplicity to the overall composition, and plenty of warm humor. I found myself repeatedly smiling and laughing, which is rather rare when I see ballet.

I would recommend 4 x 4: Ephemeral Architectures as a family-friendly show, and I would encourage the performers to keep working. I think they could push the envelope further, perhaps adding more dancers and more props, and trying more complex choreography.