In biology, there is the term “hybrid vigour” to refer to the combination of different gene pools to produce plants with stronger growth. A similar concept can be applied in the arts. Thus, we have the example of Akram Khan, combining classical Indian Kathak with contemporary dance to produce some of the most sought after work created in the UK. Combinations don’t always work and I can remember being dismayed to see disco moves introduced into Latin-American dance. There are also purists who resent any change to the classical forms. In my view, there is scope both for the traditional and combinations that generate new movement. 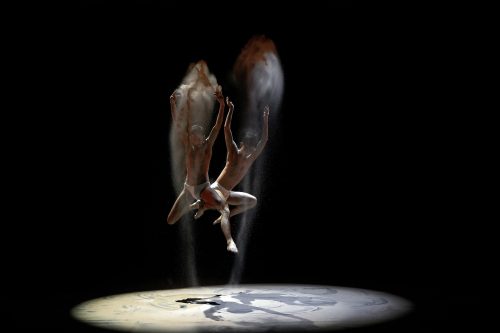 Aakash Odedra is another dance artist, keen to adapt his outstanding Kathak dance with contemporary. In Samsara, he goes one step further, working closely with Hu Shenyuan, a versatile Chinese dancer combining folk dance with contemporary, the two creating a visual feast. One of the most revered Chinese stories, Journey to the West, provides the basis, with an account of a monk’s journey to seek enlightenment with the deities. Lighting by Yaron Abulafia plays an important role and in the early stages the two dancers are frequently in separate spotlights, hooded, so we don’t know which is which. When the hoods are pulled back a fight breaks out, but is reconciled as the monks continue their journey. Eventually they reach a space with deities and pay homage. 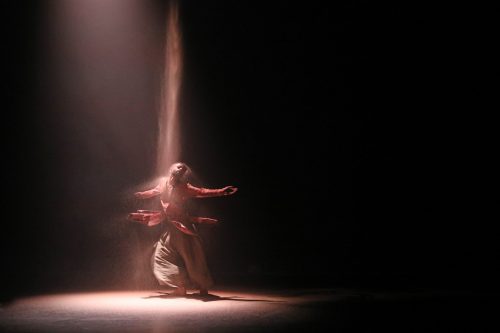 The dance takes many forms from these two superlative artists. In their duets, they create extraordinary four-armed figures and suspend each other upside down, twisting and turning with the lighting adding to the magic. When we see unison they are perfectly together even in rapid motion. Both dancers have exquisite hand movement derived from their two heritages. Odedra uses the fast spins of Kathak to great effect, especially when sand is falling gently on his head and spinning off in all directions. Shenyuan’s movement is remarkable for its fluency with serpentine arms and movement creating doubt that he has a bone structure.

The music is also top rate. Composer Nicki Wells sings beautifully to the accompaniment of ferocious drumming from the diminutive Beibei Wang, with Michael Ormiston on a variety of instruments. Overall, an evening to savour.