British born dancer Aakash Odedra, in an evening of four back-to-back solos titled Rising, accomplishes an impressive feat. Carrying a performance entirely on one’s own as a dancer must be exhausting and intimidating, but Odedra meets the challenge. It helps, certainly, that the works he performs are compelling, and that the lighting design, in particular, adds extra visual interest. While I was concerned I might grow bored seeing four solos by the same artist, to Odedra’s credit, this didn’t happen. Instead, I grew to appreciate the fusion of traditional Indian dance and more contemporary styles. I think a good dance performance furnishes some sort of enlightening experience, and Rising, which premiered in 2011, delivers.

In the first work on the program, Nritta, choreographed by Odedra, the audience sees classical Indian dance technique accented with unbridled joy. Dressed in all white, Odedra seems to be engaged in jubilant worship. Fittingly, to kick off the night, his arms rise. Then his feet percussively slap the floor. He leaps high like a deer and spins like a dervish, all while keeping his head perfectly upright, his upper body erect like a doll. Sometimes his hands jut out like daggers. As he moved, often with lightning speed, I imagined a trail of calligraphy left beneath him.

In the Shadow of Man, by acclaimed choreographer Akram Khan, provides a distinct contrast. Nritta bursts with happiness, but In the Shadow of Man is dark and brooding. In its opening minutes, hazy clouds hover over the stage (lighting by Michael Hulls). Odedra is shirtless and crouched with his back to the audience. His shoulder blades grotesquely rise and fall, and eventually he lets forth an animalistic yowl. The music by Jocelyn Peck is deliberately eerie. Odedra transforms, squawking and walking, then shrinking low to the ground again, sliding backward. His strength and flexibility are on full display. 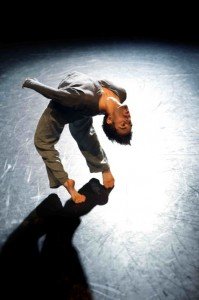 The third work, Cut, choreographed by Russell Maliphant, also features lighting by Hulls, which contributes greatly to the shape and atmosphere of the piece. Cones of light and darkness dominate the front of the stage, and smoke curls up through the cones like a lava lamp. When Odedra extends a hand out of the darkness, it glows. The music by Andy Cowton includes the hiss of drums and cymbals, emphatic beats and pulses, even the sound of ocean waves. At times, Odedra, with his arms outstretched, reminded me of a human sundial. Other times he looked like a magician, whipping up something with his flying arms. His arms become a blur as they circle. It’s a surprise when the lighting changes and the stage suddenly becomes deeper, the music grows louder, and Odedra continues to dazzle, finally fully lit.

Lastly, in Constellation, Odedra returns to wearing white. The lighting design by Willy Cessa is an important partner to Belgian Sidi Larbi Cherkaoui’s absorbing choreography. Multiple light bulbs dangle from the ceiling. Odera swings them, moving in between. With many gently swooshing at the same time, some bouncing and bobbing, it looks like a bunch of fireflies. One wonders if Odedra is possessed when his chest shakes. More than once he holds his weight in his arms as his legs extend above. There’s breathtaking beauty as Odedra reaches for a bulb, pulls it toward him, and collects the light from within. Subsequently, seated, his arms shimmy above his head like flickering flames.

I highly recommend Rising, as it incorporates traditional Indian dance technique into contemporary dance and appealingly expands dance horizons in the process. Rising also shows off the capacity of a talented individual artist and the breadth of well-crafted solos.