Akiko Kitamura’s Cross Transit has a wealth of ideas. And the ideas are intriguing. Cross Transit plays with the nature of time, memory, culture, human interaction with architecture, and so much more. Tokyo-born director/choreographer/dancer Kitamura founded the dance company Leni-Basso in 1994 when she was a graduate student at Waseda University in Japan, and then disbanded the company in 2009, turning instead to solo projects. In 2015, Kitamura began the Cross Transit project involving collaboration with a series of Cambodian artists. Cross Transit premiered in Tokyo in September 2016, and it was performed in Phnom Penh in 2017. A second installment in the series, Cross Transit — Vox Soil, premiered in 2018 in Yokohama, Japan.

The choreography in Cross Transit, however, isn’t as interesting as the rich and varied ideas upon which it’s based. The movement is largely pedestrian and often comes across as cold and insular, especially at the start of the work when the dancers move slowly. They eventually engage more with each other, sharing weight and even exchanging words, but there’s something distant about their relationships. 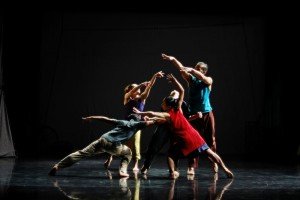 The dancers repeat certain gestures and phrases, both movement phrases and spoken ones. They reach forward making a straight horizontal line with their bodies, one leg stretched out straight in the opposite direction. Fingers pinch at the air as if trying to seize fleeting memories. Dancers talk haltingly using only a few words, in a kind of verbal version of tag. They say, “leg,” “now,” “here,” “home” — and then occasionally, with perhaps a note of exasperation, one asks, “What are you talking about?” The language the words are spoken in varies. There’s a smattering of English, but I heard mostly Japanese, and I assume Khmer. Because I speak some Japanese, I understood more than most audience members, who I would guess were at least somewhat frustrated by not being able to catch the meaning of all of the words being tossed about.

The most striking and effective choreography occurs in the middle of Cross Transit. Five dancers (Ippei Shiba, Yuka Seike, Yuki Nishiyama, Lion Kawai, and Chy Ratana) rest seated in a lotus position, and from there their upper bodies come alive. For the most part in unison, and remaining mostly seated, they execute a series of surprising movements. Arms rapidly swish and rise. Hands circle, clasp wrists, hit chests, and slap the floor. The togetherness is notable, jarring, and also oddly comforting, particularly given the rather remote, slightly spooky feeling of the work otherwise. 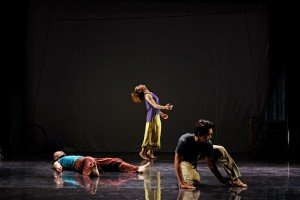 Cross Transit, though, is more about the big picture than the choreography. Actually, it’s very literally about pictures. Cambodian photographer and videographer Kim Hak supplies the pictures — images he has taken that are grouped according to themes. It’s these images that remained with me post-performance as  opposed to the choreography. I see empty buildings, discarded items. Hak’s photos definitely drew me in, but the dancing didn’t really enhance my experience of them or the stories that they impart.

Although the photos have stories to tell on their own, Hak’s voice provides background. Later in the work, Hak himself appears and speaks. Movingly, he tells of his parents having to cover cherished photographs in plastic and bury them in the ground to avoid harm by the Khmer Rouge, who would murder people like his father, who were discovered to be from the educated class. 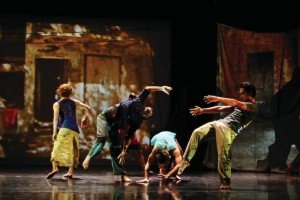 The rest of Cross Transit’s artistic team also make great contributions. Hiroaki Yokoyama, composer and sound director, adeptly adds atmosphere. There are soft street noises and children’s voices to heighten the sense of abandonment in the eerily beautiful photos, gunshot-like pops to power the faster movement sequences, and cool flapping sounds that reminded me equally of a flock of birds and magnetic tape being quickly rewound, which illustrate the passage of time. Plus, Akihiko Kaneko’s video and set design are truly outstanding. Three large screens at the back of the stage are fabric pieces hung and folded to resemble kimono-like garments. At times, a white rectangle appears in the video projections forming frames that make photos. Toward the end of the Cross Transit, rotating shadows flutter downward over images of deserted buildings, like a snowstorm of photos spinning to and fro. The lighting design and technical direction by Yuji Sekiguchi are top notch, too. For example, Sekiguchi cleverly uses sudden bright lighting changes to act as camera flashes. Tomoko Inamura’s costume design consists of blocks of color — different colors on top and bottom, and while not exactly compelling, the soft-looking casual combinations allow the dancers to move flexibly and don’t distract from the photos and video that ground and inspire Cross Transit.