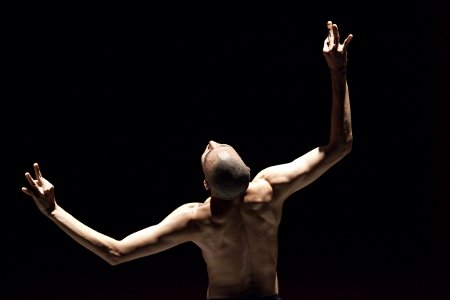 In the space of two months, dance lovers in London have been blessed with the opportunity to see Akram Khan’s latest work, Until the Lions and now a revival of his first evening length creation, Kaash. Khan studied both kathak, the Indian classical dance form, and contemporary dance to professional standards and used this base to establish and name modern kathak. In a variety of areas ranging from science to music, combining two strong disciplines to create something new can be a rewarding activity. Yet, I remember one American critic deploring any such attempts in dance. “I keep a kosher kitchen,” was the watchword, “purity” above all. There are of course any number of counter examples, but Khan’s aesthetic is a prime illustration. To the structures, use of the floor and aesthetics of contemporary dance, Khan has brought kathak technique – much greater attention to the hands, and rapid steps, gestures and spins. The result is dazzling.

Kaash dates from 2002 and Khan had already established a reputation that attracted highly regarded collaborators: composer Nitin Sawhney and set designs by artist, Anish Kapoor. Due to lack of funds, Kapoor had to keep things relatively simple – at the back of the stage a black square with fuzzy edges blending into a grey surround and red background. By varying these outer colours, the backdrop is always changing and fascinates. Nitin Sawhney mixes fierce drumming with gentler sounds from a range of Indian instruments and extended silences. As one of the dancers told me, “It’s music that cries out for dance.” 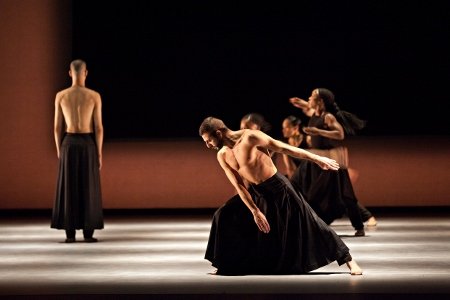 Khan writes of inspiration from various sources including: Hindu Gods, black holes, creation and destruction, but it’s not necessary to trace these elements to marvel at the production. Kaash opens while the auditorium lights are still up, with a tall man in stasis, Sung Hoon Kim, dressed in a long black skirt facing the back wall; perhaps a God before the creation of the world. His presence stills the audience, but at five minutes (even longer the first night) this stretches their patience. The lights drop instantaneously and when they come up a thundering drum beat introduces four more dances in a straight line at the side of the stage, performing the kernel step with their bodies and one leg bent forwards with the arms pointing backwards. They move across the stage with extraordinary animation – I found myself jiggling in my seat from the excitement. Arms often fully stretched carving arcs in the air; hands come together with fingers touching making a bridge in typical kathak style; bodies spin and jump with huge energy.

This energy is personified in the dancing of the Alleyne twins, Kristina and Sadé. With a background in athletics and hip hop they completed their dance training at Northern School of Contemporary Dance in Leeds. Their powerful musculature enables them to move with extraordinary speed sometimes almost faster than the eye can follow. In a solo, Sadé uses her speed to project a chaotic, panicked soul, but when joined by Kim, she copies his more measured moves, culminating in a lyrical duet, reflecting a new serenity in her life.

The third woman, Sarah Cerneaux, brings a different aesthetic, always perfectly in time, but with a softer line and weaving the most beautiful shapes with her kathak style arms and hands. Kim also closes Kaash and with his tall, thin frame and angular movement he gives the impression of a visitor from another dimension, culminating in a final solo coda facing away from the audience again, but with his back and arms dancing until the curtain drops on a slow arc with arms outstretched above him.

Kaash is part way through a worldwide tour, but I hope it returns to the UK so more people can experience its heady mix of excellence in choreography, performance, music and design.

Akram Khan Company: Until the Lions