None of that matters.

Alejandro Cerrudo’s It Starts Now is one of the most fascinating, unusual, imaginative, stunning, and mesmerizing pieces of choreography and stagecraft that I’ve seen. If you have an interest in seeing where 21st Century contemporary choreography may be headed, you must see it. 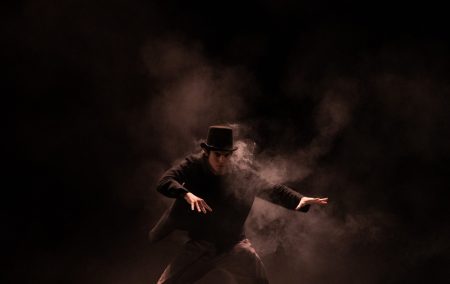 Cerrudo, who was born in Spain and is based in Chicago, is not an unknown quantity suddenly appearing out of nowhere. He’s been choreographing internationally and garnering honors and awards on a continuing basis since at least 2006, when he choreographed his first piece for Hubbard Street Dance Chicago, a year after joining that company as a dancer. Two years later he became HSDC’s first Resident Choreographer, a position he held until 2018. In 2020, he was named Resident Choreographer at Pacific Northwest Ballet.

I’d seen examples of Cerrudo’s work previously, but didn’t remember until after I saw It Starts Now in its world premiere performance last night at The Joyce. If I had, maybe I wouldn’t have been so pleasantly, and unexpectedly, surprised.

When I entered The Joyce last night and began reading the program, I noted with annoyance the absence of anything describing the piece or providing a pathway toward understanding what Cerrudo was trying to say. There were no program notes at all. And I saw that the dancers executing his choreography are not part of his “company,” or any one company – they’ve been assembled from a variety of companies or organizations and have varying dance backgrounds. All that the program provided, besides the dancers’ names, was a listing of the sixteen musical sources he used to craft the dance’s score (plus “additional compositions” that were not specified), which it soon became apparent were not even listed in performance order. What the program did say was that the production was co-produced by Cerrudo and The Joyce. The red flags were all there, and I expected a vanity piece. 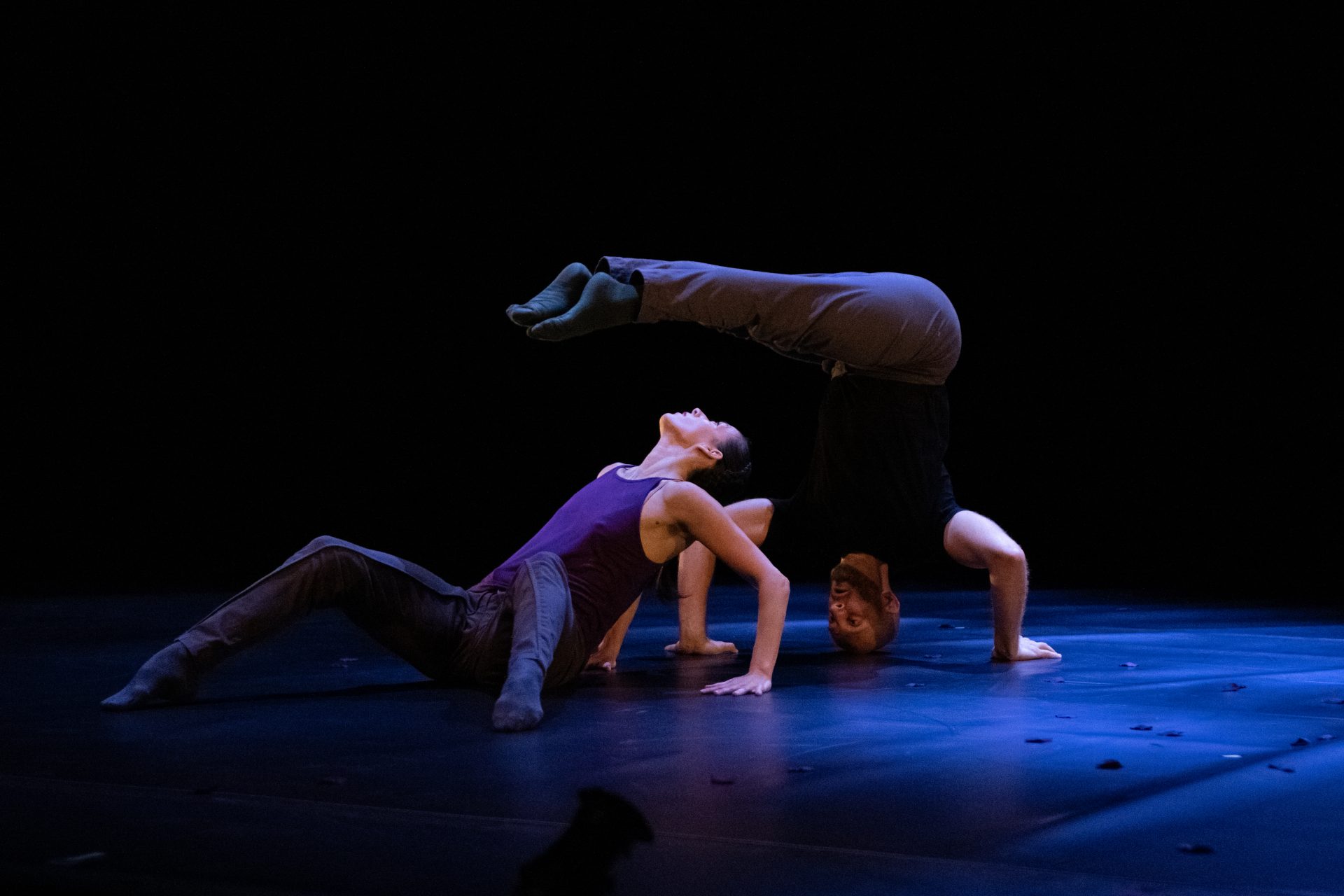 And when the dance began, I thought my low expectations would be fulfilled. Nothing I saw made much sense. Sure the opening image of a dancer / person suddenly appearing from within a partially rolled up “rug” (actually more like an oversized plain-looking blanket or comforter) was clever. Sure the darkness that surrounded him and that was repeatedly breached by lights that briefly illuminated dancers who inhabited nooks and crannies of the stage area looked striking. Sure the image of the unraveled “newborn” or “newly aware” dancer / person wearing a dark-colored top hat and moving slower than a live statue on 42nd Street looked … interesting. Ok, I thought. This was all a metaphoric coming to life or awareness. So? 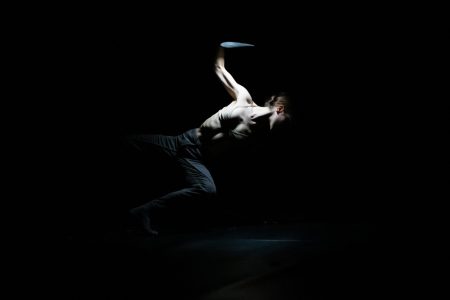 And it continued. Dancers emerged from the darkness and then retreated. Dancers’ faces or bodies were caught sequentially in flashlight-illuminated poses. One female dancer suddenly approached the dancer / person in the top hat and slowly and deliberately leaned over and gently kissed him – thereupon releasing a stream of “confetti” from his head. Wait. What??

After that, action proceeded non-stop even if performed slowly. I was madly scribbling notes to reflect the various impactful and unusual images I was seeing, the ambiance Cerrudo was creating, and which piece of background music he was using, but I couldn’t keep up. It seemed chaotic.

And then something wonderful happened. I dropped my notepad beneath the seat in front of me, and couldn’t retrieve it without creating a major incident. As a result, I stopped taking notes, and focused exclusively on what I was seeing. 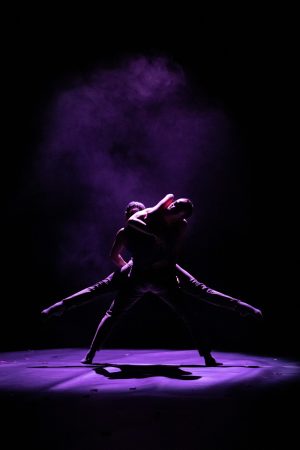 If a flashlight had been focused on me soon thereafter, it probably would have shown me gazing intently, eyes wide open, mouth agape. Between Cerrudo’s choreography and stagecraft, the interplay of light and darkness (the amazing lighting was designed by Michael Korsch), the gender-identifying and gender-bending costumes (by Branimira Ivanova), and the positioning and continuing flow of bodies on stage – memorable moments in time were happening so regularly that noting and cataloging them all, either in notes or memory, was impossible. This wasn’t anything not previously seen elsewhere. Dancers emerging from behind a curtain or from upstage darkness, seemingly out of nowhere, is nothing new. Dancers being dragged across the stage floor, and/or over the bodies of other dancers, is nothing new. Imaginative lighting, including illumination by flashlight, is nothing new. Go to any “emerging company” combined program and you’ll probably see the same thing. But I’d never seen all these qualities to this extent, integrated so well, or so intelligently presented as part of a unified, albeit somewhat opaque, whole. 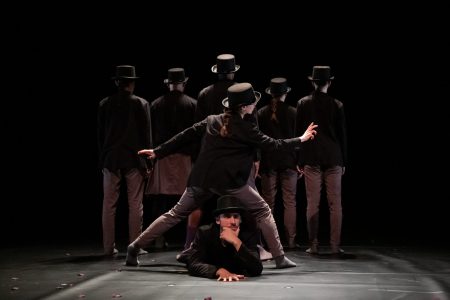 But mostly it was the choreography. Cerrudo’s work here is dominated by complex, asymmetrical, balance-shifting fluidity, partnering that’s as much comparative positioning as actual contact, and imagery that is a continuing surprise – without tricks or stage hyperbole. And although emotions play a part, they’re captured in the stage ambiance Cerrudo creates: dark and somewhat fatalistic, but not always gloomy – at times (admittedly rare), it’s rapturous. Rather, it’s how he puts it all together; the moving images he creates; the visual smorgasbord. And it’s the fact that, minute to minute, nothing looks like anything else.

I haven’t mentioned the dancers, but that’s because this is very much an ensemble piece in which one or another dancer may suddenly appear, dance, and then disappear. Literally. But from their wide-ranging backgrounds came an extraordinary unity of purpose and execution. All were magnificent. The group consisted of Eddieomar Gonzalez Castillo, Haley Heckethorn, Ana Lopez, Stefanie Noll, Seia Rassenti, Robert Rubama, Daniel Rae Srivastava, and Benjamin Holliday Wardell. 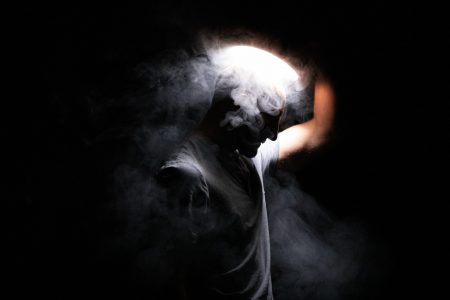 One of the few adjectives I didn’t use to describe this piece is “original.” What’s original is how he put it together, but the nuts and bolts were done before. By him.

At the outset I mentioned that I didn’t recall seeing a previous Cerrudo piece. When I returned to my computer, I checked. I had: beginning in 2014 with Memory Glow for PNB, and a few months later several that he’d created for HSDC. In June, 2015, the last time I saw any of his work, he was one of four choreographers invited to contribute to Wendy Whelan’s program: Restless Creature. There he created, as a duet for two of them, Ego Et Tu. In my review, I referenced Cerrudo’s use of lighting (“beneath a solitary beam of light, one man appears to be searching for something”), his stagecraft (“Eventually, he pulls Whelan, costumed in pure white, out from the upstage rear curtain closure”), and his theme (“searching; awakening; the need to be complete”). It Starts Now is an expansion of those same qualities, and much more. And I also wrote at the time: “The more I see of Cerrudo’s work, the more impressed I am by the breadth of his choreographic ability.” [See me giving myself a pat on the back.] 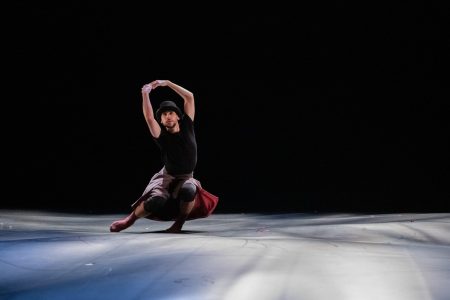 So what is the “It” in the title? What’s “It” all about? Well, the top-hatted tramp-like character(s) may be a nod to Charlie Chaplin. He’s an “Everyman.” The “It,” I initially thought, was relationship-awakening, but the addition of the final part of a speech by Chaplin from his film “The Great Dictator,” and the accompanying ensemble choreography shows that Cerrudo intends “It” to be far more extensive than that. Maybe life in contemporary society, or, based on its back-to-the-beginning ending (you knew it was coming, but it was still wonderful to see him pull it off so brilliantly), the circle of contemporary life. 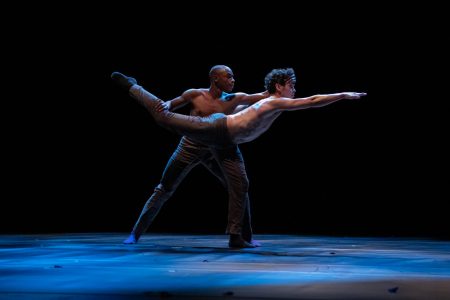 But as I indicated at the outset, what “It” is doesn’t matter beyond the fact that It Starts Now is a unique visual experience that’s not so much watched as visually inhaled. Amid apparent chaos, there is clarity.

The program continues at The Joyce through Sunday, October 3. See it.