Titled 8 Minutes – the time it takes sunlight to travel to the earth – but lasting around an hour, this collaboration of dance, music and film was given an intellectual boost from a leading scientist, Dr Hugh Mortimer, and dramaturg, Sasha Milavic Davies. Like so many ancient rituals before it, the creative team was enthralled by the sun, the giver of life and centre of our universe. The study of solar physics, which references matter and energy, clearly has links to dance and it was on the suggestion of Mortimer that this protect was launched.

We can rely on the solar system to provide impressive visuals and now, with technological advances that allow us to see deep into space and enlarge the images to magical proportions, the sky is literally, the limit. Video artist, Tal Rosner, had a field day, allowing his imagination free rein. The opening graphics traced sharp geometric patterns interrupted by the trajectories of shooting stars. The images followed in quick succession culminating in the final moments with a fiery sunburst so fierce it seemed to singe the dancers who bathed in its reflection. 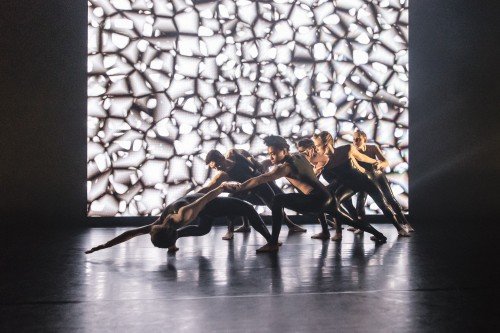 Visually inspiring as the images were, it was difficult to see a philosophical pathway or indeed any logical development in their selection. Their beauty alone seemed reason enough for inclusion for Rosner. The choreography took a similar line as Whitley’s movement melded the dancers into a single living organism where a lone dancer, or two, would peel off and gradually be joined by others to build a new entity, when the pattern would then repeat. The movement flowed like molten lava, sinewy and supple, but at times hectic and tinged with risk. Daniel Wohl’s score, an electronic and acoustic mix, is the perfect accompaniment, rising and falling in waves of sound.

Whitley has assembled an impressive group of international dancers – there is certainly no shortage of top dancers who are without permanent contracts – and choreographers are fortunate to have such talent to draw on. The seven performers were thrilling to watch and worthy of the rousing cheers from the audience at curtain down. But I couldn’t rise to that level of enthusiasm for the performance, feeling a touch of emptiness and the need for an inspired edge to the choreography, which remained in the shadow of the video.