Seeing Alexei Ratmansky’s Cinderella for the Australian Ballet it was hard to equate this overblown production with his stripped down, flawed but eloquent, version for the Mariinsky Ballet in 2002. This time it seems that Ratmansky and designer Jérôme Kaplan in heading down-under, have found inspiration from Priscilla, Queen of the Desert. Kaplan is a designer capable of great style and elegance, evident in his designs for Jean-Christophe Maillot’s Cinderella and any number of other ballets. However, the heavy interiors, bulky costumes and weird headdresses do little to structure or shape this ballet.

Sergei Prokofiev’s score is a gift to the ballet world: magical and mysterious but also problematic. It is not as robust as his Romeo and Juliet but is at least as prescriptive. The first act, apart from introducing Cinders, has music for all sorts of comic business and it is only in the transformation moving away from the clutter of the house, that his evocative music for the seasons provides the opportunity for full-on dance. 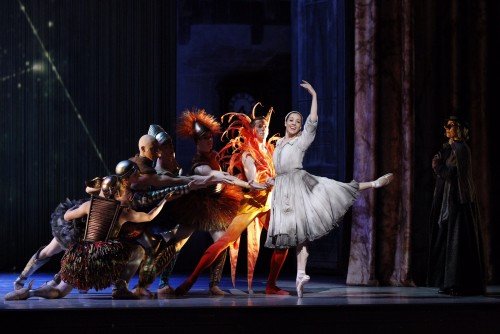 After a brief moment of sadness, gazing on her dead mother’s portrait, Cinderella, Leanne Stojmenov, reveals a feisty and down-to-earth character. There is a plenty of bawdy fun with stepmother, Amy Harris, throwing a tantrum over her wig. (I quite agree – it was dreadful!) The uproarious dancing lesson proves Eloise Fryer as Dumpy to have the most fine-tuned sense of comedy. In the kitchen, oddly furnished with a pink, pouty-lipped sofa and washing line strung across its width, the trio are too often just silly and bad-tempered with little of the humour sufficiently barbed. However, the trio do get some clever choreography which they accomplish very successfully to the enjoyment of the audience. 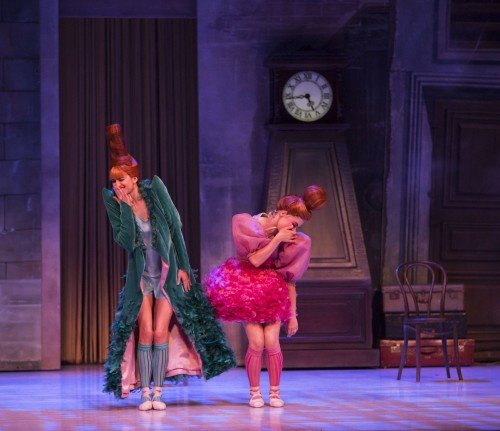 Fairy Godmother, Jasmin Durham, eccentric in appearance as a pointy nosed bag-lady, is sadly undervalued and short on magic and ditto the seasons. Ratmansky has transformed them into planets, who play little active part in Cinderella’s make-over to a glamorous Princess, and Prokofiev becomes almost an afterthought.  These celestial bodies bring a surreal costume opportunity and, with a trendy nod to gender diversity, sport unisex gear and brightly coloured bubble tutus.
In the ballroom the company get down to some serious dancing, the sycophantic guests posturing around the Prince. In the role Kevin Jackson makes his presence felt. He bursts onto the stage in a brilliant white suit and executes an impressive solo in the traditional grand manner. The duets allow opportunities for emotional contact between big lifts and supported adage, but it is only in the final pas de deux in the moonlight that they seemed to find genuine harmony finishing in a gentle embrace.  The pair are very accomplished dancers but, despite the promises in the programme notes, rather standard characters. A telling moment comes as the clock strikes midnight and the Prince meets his Cinderella now in her drab dress and totally ignores her. Is he in love with the woman or only the woman in designer dress? 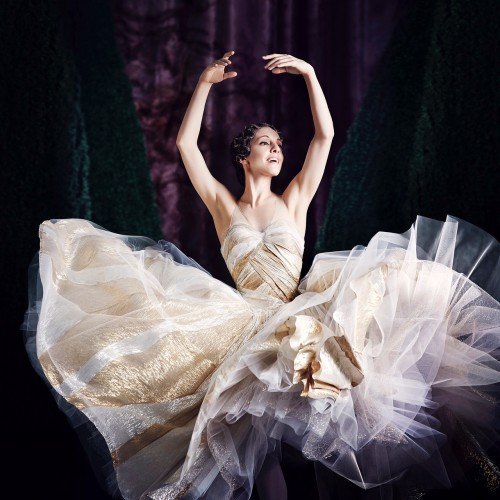 The third act is another tricky one. A limousine is projected on the back drop as the Prince searches the world trying to find his elusive love. Prokofiev offers a narrative but there was little coherence in the choreography. The Prince encounters temptations: first a group of nubile but ineffective women followed by a team of men who lift and carry him to little effect. It is all very confusing but he eventually finds his way to the right house to meet his Cinderella.

Thinking back, Ratmansky’s 2002 version reveals how much a great artist, like Diana Vishneva, can shape a work.  I was pleased that the week before, the Australian Ballet presented their home grown Swan Lake, and were able to show the quality, both technically and artistically, of this fine company.