Alison Cook Beatty Dance, a relatively young, small company that I have reviewed several times previously, was supposed to celebrate its 10th Anniversary with a special performance last night at New York Live Arts, a program that had been delayed because of Covid. It didn’t happen – at least not as planned. Something else did.

Live theater is characterized by performances, give and take, euphoria and misery, success and failure. Live theater is also characterized as something inescapable. “That’s live theater, folks” is a phrase that summarizes things that are unexpected: lines flubbed; words or choreography forgotten; injuries, accidental or not, for which an immediate replacement is secured and, legend has it, the replacement succeeds miraculously. But it can also include a tragic or potentially tragic development like one that occurred at this 10th Anniversary performance. And it proved important not just for the specific incident, but for what followed.

The program was to be as much a celebration as a performance. Complimentary glasses of refreshment were set up to greet audience-members, including dance glitterati as well as family, friends, and an occasional reviewer as they entered the theater lobby, a welcoming table was in place, the room was staffed primarily by young dancers, and there was a joyful spirit that permeated the atmosphere.

This joyful spirit was not just the aura surrounding a celebration of accomplishment – it was augmented by a man who, after he arrived, took charge to make sure everything was presented properly and would proceed flawlessly. His affect was not that of a person hired for that purpose; rather, he looked pixilated, happy to see that everything was proceeding optimally, and who spread a spirit of good feeling wherever he went. At one point, he saw me (I had ascertained that his informal first name was the same as mine – you learn a lot by listening) sitting on a window bench a few feet away, and struck up a conversation. Just spontaneously. He said he’d seen me before many times (as I’d seen him), and concluded that I was interested in dance, and commented on how special – and addictive (though he didn’t use that word) – an art form it was. I acknowledged and agreed, but I didn’t push the conversation further because I didn’t want him to, possibly, recognize my name or know that I was there to review the performance – a decision I now regret, particularly since I act here as a chronicler, not a critic.

The program, which was to feature one newly-choreographed piece and one that was created at the start of Cook-Beatty’s choreographing career, consisted primarily of dances that I’d seen and reviewed previously: something like an Alison Cook Beatty Dance Greatest Hits. The new and the old opened the program, after which there were to be a couple of celebratory speeches, and then the program was to resume. 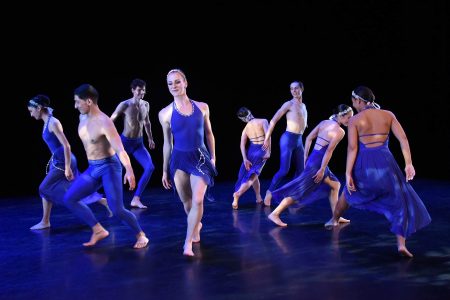 As I wrote earlier, this isn’t intended to be a detailed review, but, minimally, the first piece, Joyful Offering, was a perfect opener. This was its New York premiere (it was first performed less than three months earlier in MA), it involved each of the company’s eight dancers, and it’s one of Cook-Beatty’s finest and most accessible pieces. The second piece, created in 1998, was choreographed and performed by Cook-Beatty herself, with Jisoo Ok on cello. Touched By Fire is a not unusual type of solo by a nascent dancer/choreographer, but this one has flair and compelling sense of leaving the past behind to pursue an unknowable but essential future. 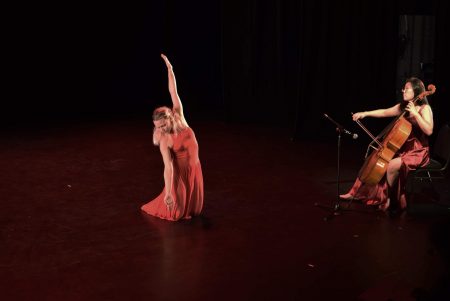 Alison Cook-Beatty (with Jisoo Ok) in “Touched By Fire.”
Photo by Rob Klein

Then the speeches began. First the company’s Board President Gerald Appelstein addressed the group: the same “Jerry” who had attempted to initiate a conversation with me earlier. His relatively brief but all-encompassing address was delivered in good cheer and with a pervasive effervescence reflective of what I’d ascertained was an ebullient personality, with no hint of pomposity on the one hand or nervous stage-freeze on the other. The performance was listed as presented “in collaboration with the American Foundation for Suicide Prevention” – that is, to recognize and honor the group – and the second brief address was delivered by Sarah Jamgotch, the Programs Manager for that organization.

Then it was Appelstein’s turn again, this time to introduce the next piece on the program, titled One More Day. I had reviewed this piece highly favorably at its premiere last March, and, in sum, found the choreography, the composition (“If I Had One More Day”) by Polina Nazaykinskaya, played live on piano by Konstantin Soukhovetski and sung to the words of the poem that inspired it, and the performances by the company to be brilliant. “The poem,” I wrote, “is a ‘grief’ poem – reflecting and relating the torment one feels after the death of another: the inconsolable need for ‘one more day.’ The dance is a dance of grief too, but the simplicity of the music combined with the anguish of the words create tension between agony and resolution that the dance replicates and translates into an emotional quagmire and a physical struggle.” I mentioned the poem and its author in that review, but didn’t connect the dots.

The gripping poem was written by Appelstein.

As he was introducing the piece, Jerry suddenly stopped and immediately fell backward, hitting the stage floor like a tree trunk. 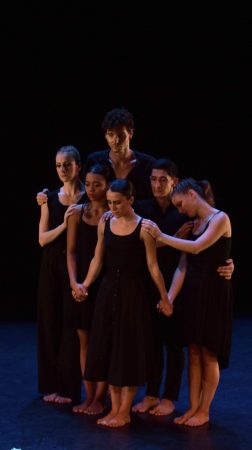 I, and maybe others, thought this strange for a second or two, and then realized it was not staged. You could hear jaws drop to the floor in disbelief. I thought perhaps Jerry had fainted or suffered a spasm attack of some sort, but he didn’t move. At this point, the audience – a full house – gasped, and people, including theater staff, began rushing to his aid.

The staff ushered the audience out of the theater and, since they would have overwhelmed the lobby, onto the street. Fortunately, someone had called for medical assistance, but the time passed. I remained inside the lobby together with about half a dozen other people. One, a woman I’d seen earlier and had assumed was either directly connected with the company or a friend, mentioned to no one in particular that there was no heartbeat. She suggested that we pray. Whether one is religious or not, it seemed the right thing to do. All of us, six or so people who were strangers to each other, held hands and prayed, silently, for what seemed to be an eternity. Then we heard the sound of an ambulance racing to the theater entrance. And another. And a fire truck.

As the first-responders entered the theater, someone raced out of the auditorium to meet and direct them, shouting that they must hurry since he’d already been “out” for 3 (I think he said 3-4) minutes. Then nothing.

Eventually, after another eternity, someone emerged saying they’d gotten a heartbeat. More time passed, and some paramedics with a stretcher ran into the auditorium. Everyone outside and those who remained inside were directed to go across the street, and eventually, after what must have been a period of stabilization, the stretcher with Jerry in it was carried out to the street and the waiting ambulance. It sat there for awhile (presumably more stabilization), then sped off, and the audience was told that it was Cook-Beatty’s wish to present the next dance only, One More Day (the one that Appelstein was introducing and the one on whose poem it was based), and that the audience could return to the theater.

Cook-Beatty briefly addressed the audience. Again, I don’t feel comfortable repeating details that she related of the genesis of the poem, the one that inspired One More Day, but, not surprisingly, we learned that it was created in response to a specific family tragedy. Had I known these details last March, I might have seen the piece’s specific meaning and the characters in it differently, but in the end it doesn’t matter: grief is grief.

And, in hindsight – and regardless of surface demeanor – the recollection of the tragic events in Jerry and his family’s life might well have been too much internal turmoil to bear.

Alison Cook Beatty Dance thereupon performed One More Day with even more anguish than I’d seen last March. Again, although all the dancers excelled, the piece was led by Jacob Blank as the one who departed with the same sense of hopeful, comforting helplessness he did before, and with Mariah Anton (now Mariah Anton Arters), the dance’s focal point, delivering another superior performance. As I wrote following its premiere, “[e]very ounce of her body is aflame; every gaze from her eyes is wildly grief-stricken … and is clearly communicated beyond the stage to the audience.” I concluded then with: “Her performance conveys a reality that stings, and that ultimately breaks the heart.” Last night the heart was broken again. 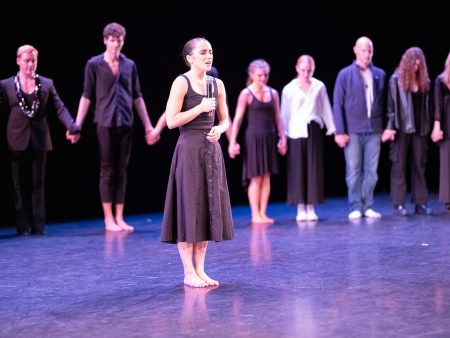 Mariah Anton Arters, center, with dancers, guest artists, and staff
leading the audience in a prayer
Photo by Sam at sdfmedianyc

What followed was yet more moving. All the dancers (who should be named: in addition to Anton Arters, Blank, and Cook-Beatty, they were Genaro Freire, Maddie Burnett, Tomislav Nevistic, Madeline Kuhlke, Kaysha Smith, and Ioanna Ioannides), guest artists (including Nazaykinskaya, Soukhovetski, and Ok), and members of the company and theater staff gathered on stage in a half circle. Led by Anton Arters, the company’s senior dancer, they and the audience prayed together. The words Anton Arters spoke, her delivery, her impassioned and cracking voice, and her tears were even more moving, if that’s possible, than her performance. Knowing that it was extemporaneous made it resonate yet more. Regardless of the “why” or “how,” regardless of the underlying tragedy, and regardless of the fact that this was reality rather than theater, this was a miraculous moment, and a lasting memory.

And then the audience left. Some remained in the theater lobby, but most walked away solemnly, and with renewed awareness that life – real life – can’t be taken for granted, and that every day, including every day with a loved one, is a gift.

The first responders (although it felt like an eternity, the ambulance arrived in record time) must be recognized for the skill and professionalism they displayed. And Alison Cook-Beatty and her dancers, and the audience in its entirety (which included medical doctors who administered essential care and did CPR before the ambulance came, including specifically Dr. Nick Beatty, Dr. Howard Schranz, and Emily Chamberlin, a dancer certified in CPR), merit gratitude and acclaim as well. Theater, including dance theater, is a community.

The last I heard, Jerry is stable and recovering, with surgery scheduled for this week. We wish him the best. 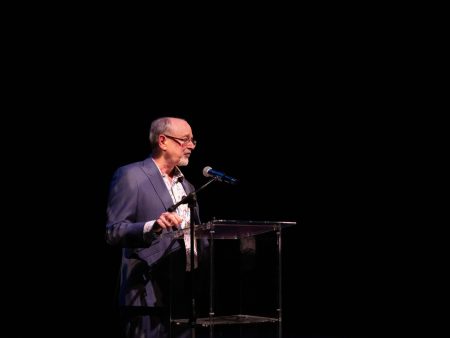 Skunks and Squirrels, Moths and Butterflies, and Ghosts