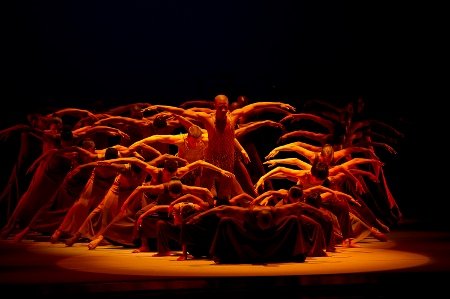 The Alvin Ailey American Dance Theater has been performing at the Kennedy Center annually for at least 15 years.  The company has a huge fan base in Washington, DC, and has more dancers from the DC area than from any other place in the United States.

Attending an Ailey performance is almost a rite of passage in Washington, and seeing Ailey’s masterpiece Revelations ought to be on everyone’s bucket list.  Every performance in DC ends with Revelations, since it would be next to impossible to follow it, and since audience members would be sorely disappointed not to see Revelations even if they have seen the work countless times.  I have not tired of seeing it yet, and I don’t think I ever will.  Plus, it’s always someone’s first time to see Revelations.  The couple seated next to me confessed it was their first time, and I could barely contain my excitement for them.  I knew they’d be moved.  Revelations emits radiance of a sort that makes people beam.  Although it’s more satisfying to watch the dancers, it’s fun to watch the audience, too, to see the bright faces enraptured by the dance.

Opening night introduced two 2015 works: Open Door, choreographed by Ronald K. Brown, and Exodus, choreographed by Rennie Harris.  Open Door, accompanied by music from the Afro-Latin Jazz Orchestra, is inspired by Cuba, and the sassy colors and sounds evoke Cuba’s exuberant spirit.  One of the most rewarding things about Open Door is the amount of repetition.  There are lots of movement phrases that are recycled.  Linda Celeste Sims began the work with a sweeping and smooth solo.  Her arms outstretched seemed to engulf the entire space.  She was followed by Matthew Rushing now a guest artist and rehearsal director, who executed the same solo.  It was thrilling to see both dancers throw themselves into the work with such marvelous control and artistry.  One could feel the lift of their chests and the extension of their limbs from finger tips to toes.  Open Door gradually heats up like a summer day, and the lighting by Al Crawford also adds warmth.  More dancers join, and the volume grows louder, so loud, finally, one feels like one is in the front row of a lively jazz club.  The rhythm of the music echoes in the deeply bent knees and arms that jut out in a section that closely resembles African dance.  As it proceeds, Open Door takes a number of turns, from emotionally bereft to emotionally impactful, and from hip-hop to a quieter, more lyrical style. There are also moments that look more like street dance.  Dancers low to the ground jump from a squat to lie face-up, flat on the floor, and they also make lasso-like gestures with their hands in fists.  These phrases gloriously repeat, too.

In Exodus, Rennie Harris, known for his hip-hop choreography, tackles current issues like police brutality.  Through his choreography, Harris gives the gift of transcendence.  In the beginning, there is a gunshot, and there are moans and roars.  From inert bodies spread in a tragic landscape on the floor, dancers in street wear (plaid shirts around waists, some baseball caps) rise like zombies, run backward through lives that were cut far too short, and end up clad in all white, like angels (costumes by Jon Taylor).  James Clotfelter’s lighting design provides shafts of smoky light emitted from gray clouds.  At one point, the dancers rapidly shake, collectively crying through their vibrations.  Anger and mourning evolves and builds.  In the middle, there is a catchy but somewhat joyless group hip-hop section.  At the end of Exodus, however, emotion returns full force.  The dancers, in their white garb, exhibit ferocity and hope.  In ghostly fashion, a dancer crosses the back of the stage, perhaps exiting this world for a better one.