If it’s the beginning of February in Washington, DC, then you can count on Alvin Ailey American Dance Theater coming to the Kennedy Center. At least that’s the way it’s been for the decade or so I’ve lived in the nation’s capital. I believe the tradition stretches back even further. At any rate, it’s an event many Washingtonians eagerly await on a yearly basis. Just as you can count on the annual Ailey visit, you can also count on the company presenting Ailey’s timeless masterwork Revelations. For me, watching Revelations is always a joy, a sort of cleansing of the soul. So beautiful and heartfelt is the movement, it’s easy to sit back and let your spirit soar. I don’t feel the need to say anything more about the performance of Revelations that I saw, except to note that I appreciated seeing old favorites like Clifton Brown still dancing divinely. 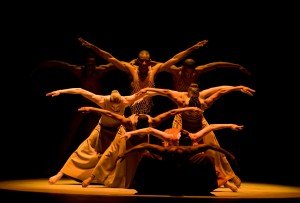 The new work on the opening program, Lazarus, which premiered in 2018, surprised me with its impact. Artist-in-residence Rennie Harris, known for his hip hop choreography, created the company’s first two-act ballet to honor Ailey and celebrate the company’s 60th anniversary season. It would be hard to match the belovedness of Revelations, or to incorporate all of the complexities of Ailey’s life and the dance company he founded. Harris, I’m guessing, didn’t set forth to do so. Instead, it seems he took a very genius approach. Rather than trying to relate Ailey’s entire life history or to mirror Ailey’s choreographic style, Harris, using his own unique language, paints a broad picture inspired by Ailey but reaching beyond him. Lazarus is such a success because in addressing Ailey’s life and legacy, Harris touches upon the larger African American experience. 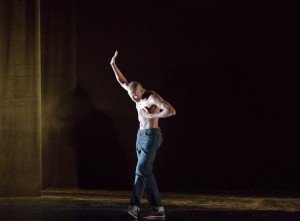 At the start of Act I, a dancer collapses into another’s arms, and this happens repeatedly, a series of resurrections like the title of the work suggests. The dancers at the beginning of the work wear simple clothing that suggests the conditions of slavery (costumes by Mark Eric), as does the manner in which they move — hunched over from their forced labor. The lighting by James Clotfelter is initially quite dark, the music and sound by Darrin Ross includes dogs howling. Dancers with heads hanging to one side, rocking on their toes, conjure images of bodies swinging as a result of being lynched. A limp body is dragged across the floor; dancers toppled by grief crawl on their hands and knees; on their backs, arms reaching skyward with hands bent to the side wave as if struck by a breeze. From this dark place, African-Americans, Ailey among them, emerged.

The dancers also journey beyond this darkness. Their steps, often slow, speed up. You sense the connection between past and present, between African roots and American struggle, in the way the dancing unfolds. The revelation here is this shared ancestry. A living history book opens up. You see in the bodies of the dancers, and their tall shadows, movement that develops into today’s hip hop and contemporary dance, which electrifies in Act II. 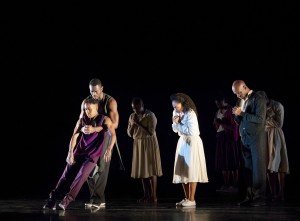 At the beginning of Act II, the group on their backs with undulating arms simulating swaying plants has moved from one side of the stage to the other. Dancers still rise and fall. As Act II goes on, the dancers’ footwork grows ever faster. Legs crisscross rapidly like lightning quick scissors. The rhythms are catchy. The dancers take flight, and it’s all sweat and energy, the kind of choreography for which Harris is best known. A celebration erupts. Arms fling from the chest triumphantly. There’s clapping. The faces of the dancers become animated and their dancing builds into something bold and lively and fun. Toward the end, Ailey’s recorded voice speaks of “blood memories.” Despite the rejoicing, there’s a serious need to respect one another in this country, and Ailey strived for this kind of coming together. Lazarus is a wonderful tribute to him that reflects and extends his dedication to “enriching the American modern dance heritage and preserving the uniqueness of the African American cultural experience.” Bravo Rennie Harris and congratulations to Alvin Ailey American Dance Theater on 60 years of Ailey ascending.