Ounce of Faith (excerpt)
A Case of You
Ode
Revelations

This year, once again, Alvin Ailey American Dance Theater appeared at the Kennedy Center’s Opera House at the beginning of February, as is the annual tradition. The State of the Union speech coincided with opening night, as has happened in the past. And I was glad to escape politics in DC for an evening again, which is usually the case. Nothing is quite as soul cleansing as watching Ailey’s masterwork Revelations, and I felt this country’s burdens lifted momentarily. Surely all dance critics can agree that Revelations is among the rarest of gifts, a dance that never grows old even when its dancers do, one that perpetually reveals deep truths about the human experience — grief, hope, and celebration — and does so with the utmost beauty and grace. 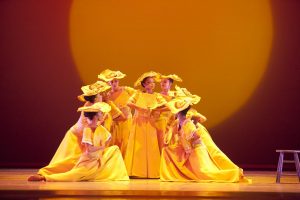 I always think that there’s nothing I would change about Revelations, not the costumes, the lighting, the music, or, of course, the choreography. And I’m always relieved that Revelations is performed the same way, with remarkable consistency, year after year. This year, however, to my surprise, something changed. What changed was so completely in keeping with the spirit of Revelations and the Ailey company that I didn’t mind. Six young dancers, ranging in age from 7-12, were invited to perform (Tommy Nelson from City Dance, Inc., Ashley Bercian from The Dance Institute of Washington, Karington Ben from the Jones-Haywood Dance School, and Nelson Mendoza, Ty Miller, and Kinley Guiden from the Maryland Youth Ballet), and they proudly began the processional at the start of the Take Me to the Water section of Revelations.  In dazzling white perfect mini versions of the grownup costumes, and perfectly repeating the choreography, these young dancers showed how inspiring Revelations remains, and how it’s likely to endure and continue to inspire new generations.

In addition to the spritely young dancers, there was another significant change, although this change has to do with the company’s leadership. Matthew Rushing, who joined Alvin Ailey American Dance Theater in 1992, is now its Associate Artistic Director. Longtime Associate Artistic Director Masazumi Chaya, who joined the company as a dancer in 1972, just retired, but he was in the audience. Witnessing these overlapping generations together brought a wonderful feeling of continuity. Ailey must be smiling down upon his legacy and the company’s longevity. 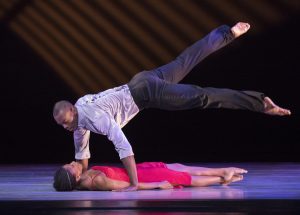 In addition to Revelations, the company performed Artistic Director Emeritus Judith Jamison’s 2004 duet A Case of You. Again, here was evidence of the power of Ailey’s influence and the loyalty of his dancers — Jamison joined Alvin Ailey American Dance Theater in 1965, while dancer Jacqueline Green joined the company in 2011, and dancer Jamar Roberts, joined the company in 2002 and in 2019 was named its first resident choreographer. Green graduated from the Ailey/Fordham BFA program, and Roberts was a fellowship student at The Ailey School, which is celebrating its 50th anniversary this year. A Case of You is a mature duet about a couple still in love with each other. Green’s skimpy red dress radiated warmth (costumes by Jon Taylor), as did Diana Krall’s rich voice singing Joni Mitchell’s song of the same name. Green, in particular, shined. She leapt into and onto Roberts, taking flight smoothly and weightlessly.

2019’s Ode, choreographed by Roberts, offers a unique take on gun violence. So unique, in fact, that if I hadn’t heard Artistic Director Robert Battle tell the audience before the performance began that this was the theme of Ode, I might have missed it. The scenic design by Libby Stadstad is a knockout. A wide black backdrop, bedecked in a waterfall of small colorful flowers, drapes at a slight angle and tapers in a chunky sort of V shape to the floor, like some kind of grand canopy. On opening night the cast included six men, but there’s an alternate cast featuring six women. Ode opens with a single dancer, curled on his or her side, facing away from the audience. The figure could be dead, the flowers could be spreading overhead in a world left behind. 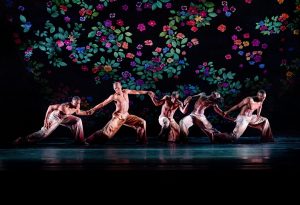 The dancers, shirtless, wore baggy silken pants that began in ivory and melted gradually into brown at the bottom (costumes by Roberts). In Brandon Stirling Baker’s lighting, both the set’s scattered flowers and the dancers’ pale pants seemed to glow. The music, Don Pullen’s 1975 jazz piano solo “Suite (Sweet) Malcom (Part 1: Memories and Gunshots),” was gentle at first, and then exploded with loud slams of the keys and discordant notes. Likewise, the dancing was initially peaceful, followed by sustained swells of struggle and restlessness. As the music stopped and started, the movement would sweep and toss and then pause. There were brief gestures of sadness — heads hanging, hands covering faces, a hand over the heart, and also moments of solidarity, where dancers stood together and grasped hands. I viewed the dancers as spirits, welcoming a new ghost to their fold and sharing collective frustration at the violence and senselessness of their passing.

The night opened with an excerpt from Darrell Grand Moultire’s Ounce of Faith, also from 2019. It’s extremely difficult to judge an excerpt, so I’ll just make a few observations. First, Khalia Campbell clearly had something to say as she emerged from a crowd of barely clothed dancers. She boldly powered forward wearing a sparkly high-necked unitard in a brownish-orange shade (costumes by Mark Eric). I did not, however, figure out what she was trying to get across. Suddenly the stage burst forth with couples in vibrant beach cocktail colors, sunny oranges, pinks, and yellows, plus bright turquoise. Skirts swished, hips swiveled, smiles broadened. Fast footwork added to the vivid pulse of life in this section, but it was impossible from the short excerpt to discern exactly where Ounce of Faith was headed. 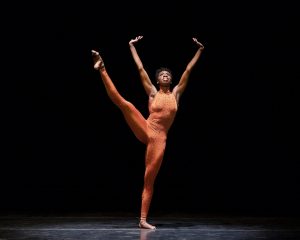 There’s no doubt that Ailey’s company is headed in a positive direction, though, and I look forward to seeing more choreography from Roberts. I also look forward to seeing those young dancers as part of Alvin Ailey American Dance Theater one day. It could definitely happen, as Battle told the audience that an impressive 10 out of its 32 dancers come from the DC/Maryland/Virginia area.