Every February people flock to the Kennedy Center in Washington, DC, to watch the Alvin Ailey American Dance Theater. This Ailey audience, in contrast to the winter weather, is always extremely warm. I get the impression that the Ailey dancers would find the opera house brimming with applause no matter what they performed, as long as Ailey’s masterwork Revelations is kept as the closing work on the program. True to tradition, Revelations received its annual rousing support from the crowd.

I’m a fan of Revelations and have written about it many times. I really don’t have anything more to add, except that even after seeing it over and over again, Revelations has an unbreakable hold on me. To my surprise, my companion for the evening thought it seemed “dated and tired.”  Oh, dear. That’s rather like insulting a religion! On the other hand, I understand where she’s coming from. I can’t argue about its age (it was created by Ailey in 1960). Despite my admitted bias, however, I don’t find it dated. To me, it’s timeless. Revelations may not look perfectly contemporary, but with its passion and power, I still find it fresh and a joy to watch. About it being tired, I don’t quite agree, either. Yes, I suppose some of the movement may look less creative as modern dance has grown and changed over time, but I wouldn’t label it tired. The dancers themselves, though, did seem a bit tired.

The Ailey company tours widely and like any professional dancers, they clearly work incredibly hard. The Washington Post has reported that the dancers are in the midst of renegotiating a contract with management and that earlier in the week they declined to attend the annual gala on the company’s behalf. I have no insight about any of the sticky contract details or what the union for the dancers is demanding, but I feel compelled to observe that a dancer’s life is tough, and dancers deserve to be treated well in terms of pay and benefits. Dancers, of course, are not only athletes but also artists, and I hope a new contract agreement is amicably reached. Without the profound discipline and risks undertaken by Ailey’s dancers, there would be no continuation of the divine Revelations. 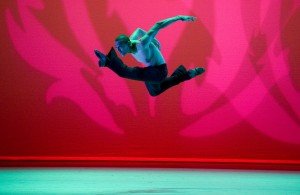 The opening work was Jamar Roberts’ Members Don’t Get Weary to bluesy jazz (or jazzy blues) music by John Coltrane. Roberts is an Ailey company member, and his 2017 piece shows Ailey’s influence. The dancers wear shades of blue (costumes by Roberts). The blue color evokes the blues, but also possibly the uniform of laborers.

The dancers freeze as a group and reach toward the sun, then they walk, change directions, halt and repeat. It’s as if they’re struggling and seeking, hopeful yet beaten down. Roberts isn’t afraid to have the dancers use the floor. They roll and reach, recline on their backs and look pained, and somehow find faith.

In an unusual and exquisite image, dancers rest with their stomachs on the ground, lifting their legs straight behind them. It’s an exercise I’ve done prior to swimming and ballet class, but it’s emotionally transformed when multiple dancers do it, making a sea of figures of who are down but not out. Another unusual image I adored was dancers with their elbows bent tight together under their chins, lifted and flapping like fish out of water. Odd and oddly compelling.

The lighting and scenic design by Brandon Stirling Baker is utterly stunning and effective. At times, Baker’s handsome lighting design nearly eclipses the beauty of the dance. There are moments when dancers suddenly materialize and completely disappear into a wide strip of hazy light. It’s the kind of lighting magic one rarely sees in dance. Baker uses light and darkness (quite a lot of darkness, actually) to help convey the shifting moods of Members Don’t Get Weary.

The music is rich and strong, and it overpowers the dancing now and then. I felt like the movement and music were chasing each other. Sometimes the movement catches up with the music and genuinely captures it, and other times there seems to be a sort of uncomfortable distance between them. But then music works that way within itself sometimes, notes circling and themes fading in and out. Roberts’ choreography has these same elements.

Most interesting are the interspersed solos and duets in Members Don’t Get Weary that emerge in bursts of energy reflecting the character of the music. Michael Francis McBride ran in a nervous frenzy. Belén Pereyra-Alem was captivating and lithe and danced with abandon. At the conclusion of the work, chins dropped, shoulders slumped, and the dancers eventually walked backward in unity.

Although I didn’t find Members Don’t Get Weary totally successful, as it seemed overly long, my heart was tugged. I do think Roberts holds great promise as a choreographer, and I look forward to seeing more of his work. 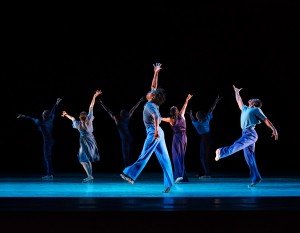 Twyla Tharp’s The Golden Section, from 1983, is an entertaining romp against the backdrop of a coppery hued metallic draped curtain. The costumes by Santo Loquasto are distracting but irresistible. Not surprisingly given the title, there’s an abundance of gold. The costumes combine sandal-like boots with skimpy deep golden velvet and ropes of shiny gold. The men are bare chested. The dancers resemble super hero gods and goddesses. David Byrne’s new wave rock score is intoxicating. Altogether, with the spirited dancing that keeps on moving, it’s a nonstop party.

The Golden Section may be dated, but it still screams fun. Revisiting another era, decades ago, remains a tantalizing voyage. The dancers exuberantly bounce and break free. Their heads and legs skitter back and forth. Like a child just learning to color, there are amusing and jagged fits and starts. Dancers run backward. A woman, breezily heading in one direction, suddenly turns around and falls into the arms of a man who had been casually walking in the opposite direction. Pereyra-Alem again caught my eye. When she dances, it’s as if she squeezes in more moves, when in fact, she’s in unison with the rest, she’s just so agile, sharp, and swift. Seeing The Golden Section is like uncovering a buried treasure. 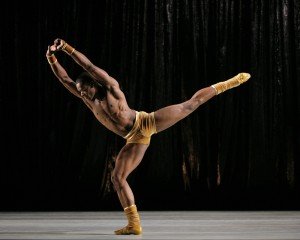 A solo, In/Side, choreographed by Alvin Ailey American Dance Theater’s Artistic Director Robert Battle to music performed by Nina Simone (“Wild Is The Wind”) dazzled as well, but more quietly. The lighting by Burke Wilmore is striking and apt. Deep shadows reinforced the beauty of Jermaine Terry’s figure, his muscles and curves further defined. Beneath Terry, the stage glowed, bathed in a vivid purplish-blue light. When Terry, with his back to the audience, bends over, grabs his legs, and steps one foot to side, the shape he makes is intriguing. His dancing is tender and follows the lyrics. He spins with the wind. This work is a song for the body.

On a final note, I was delighted when I saw Clifton Brown’s name in the program. Brown rejoined the company in 2017. Many years ago, he was among my favorite dancers. I’m glad he’s back where he belongs. He’s aged, but he still brings sparkle to his dancing, and watching him again in Revelations was a special pleasure.