American Ballet Theatre began its annual two week Fall Season at the David H. Koch Theater on Wednesday with somewhat of a whimper. Alexei Ratmansky’s Serenade after Plato’s Symposium premiered just last Spring, and Twyla Tharp’s The Brahms-Haydn Variations was performed during its Fall 2015 season. Both were previously reviewed. The revival of Sir Frederick Ashton’s Symphonic Variations was sandwiched in between. All three are fine pieces, although the time for this Ashton piece has past, but the evening provided little in the way of excitement. Consequently, my comments will be minimal – except with respect to Serenade after Plato’s Symposium (“Ratmansky’s Serenade”), which requires further elaboration.

By focusing primarily on the dance’s meaning in my initial review, I overlooked how superb a ballet for a male ensemble Ratmansky’s Serenade is. The piece is well-worth seeing for that reason alone. The choreography for the seven men has more variety and, concurrently, more consistency, than one might anticipate for a piece in which each dancer is required to transmit independent expression. Although essentially it’s an oversized chamber ballet, it’s visually arresting notwithstanding its small scale. That it also looks more appropriately set in the less grandiose Koch Theater stage is apparent immediately. 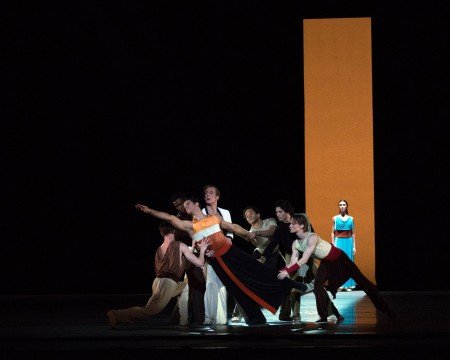 The ballet roughly follows the flow of Plato’s Symposium. It begins with one of the men appearing to lead a discussion of some sort, with the others responding – as a whole or in various subsets, and, to one degree or another, individually. Each of the individual solos is unique, with choreographic echoes from the solos repeated later when the dancer reappears (or prior to the solo) like musical motifs. In the course of one of the men’s solos – portrayed and danced by Marcelo Gomes with his usual gravitas – a panel of the rear curtain is raised revealing a woman (who could be a goddess, a mortal, or just an image). The two dance together, with the woman – portrayed with a quality of alluring distance by Devon Teuscher – at times appearing to attract and at other times to instruct the man, and then she disappears back behind the curtain. After Gomes concludes his solo, other solos follow, and then the piece concludes with the reappearance of the woman, upon which development all seven men reach out passionately toward her.

In terms of visual impact and movement quality Ratmansky’s Serenade is magnificent: it’s as well-crafted as anything he’s done. If it weren’t intended to mean something, it would be a landmark abstract piece. But it is. And that’s my problem with it.

Ratmansky is recognized (at least by me) as one of the most cerebral of choreographers. When a ballet of his is supposed to mean something, it does – although what it means may not be clear for several viewings. But in this piece Ratmansky tells the viewer exactly what he’s attempting to do, albeit in general terms. The program note states: “…In Plato’s original text, a group of men convene and deliver speeches on the topic of love, with each man bringing a unique perspective to the proceedings. They explore how love can help the soul to understand truth in the pursuit of wisdom and beauty.”

I saw none of that on stage beyond brilliantly choreographed group dances and solos about something. What these dances are intended to communicate remains a mystery: the choreography doesn’t tell us. Indeed, if it weren’t for the title and the program note, that this discussion is about the question “What is love?” would be, at best, unclear. Some may consider this unimportant – and if the piece were merely a visualization of the epic-sounding Bernstein composition of the same name to which it’s choreographed, they might be right. But it’s intended to transmit more than that.

The lone dance that may be seen to convey some meaning is Gomes’s interaction with Teuscher. But as choreographed and staged, this presents a more significant problem: it’s one thing not to transmit intended meaning; it’s another to transmit a meaning that the choreographer (and underlying author) did not intend. 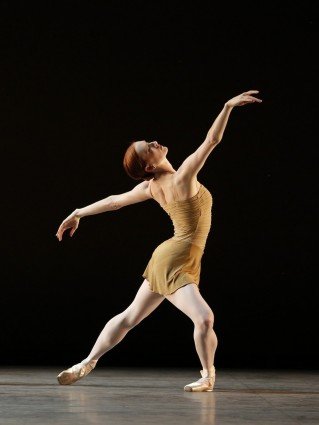 If one looks back at Plato’s Symposium (which the usual viewer would not bother doing), it’s clear that a woman appears during the discussion with Socrates. Identified as Diotima, she instructs Socrates in the meaning of love, and her dialogue has been said to describe “platonic love” of wisdom and beauty. Assuming that the female character in the ballet is intended to be Diotima, her appearance as presented in the piece implies considerably more than platonic love. Granted that there’s little that can be considered erotic about the physical interaction between Socrates and Diotima (Gomes and Teuscher), and they’re not physically together at all times, but there is obvious attraction here between the two of them, and it’s inevitable for a viewer not to think – in the absence of anything to the contrary, that romantic attraction is, at least to some extent, being portrayed.  A more accurate sense of Plato’s work might have been achieved had the they danced separately from each other throughout their encounter, without any physical contact (and without that longing look in Gomes’s eyes).

More serious a problem, however, is the piece’s ending, where the woman suddenly reappears, and all the men reach out toward her en masse. To the average  viewer, the men’s response demonstrates that she’s an ideal. And with nothing to indicate the contrary, she’s an ideal of beauty; an object of desire; and the image of love. A Greek version of five feet of heaven in a ponytail. [For those who aren’t children of the late 50s/60s, my apologies. The reference is the answer to the question posed by the “Plato-esque” title of a 1959 song sung by The Playmates: What is love?] Certainly not what Plato, or I suspect Ratmansky, intended. But that’s what one reasonably takes from the piece without an unsupported leap of logic. 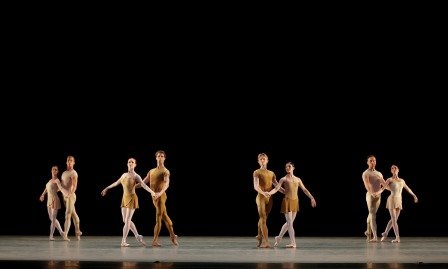 Commissioned by ABT in 2000, The Brahms-Haydn Variations is yet another splendid piece by Twyla Tharp. Like her Bach Partita (which ABT recently revived), it’s Tharp at her most classical, and even though it doesn’t look as audacious as, for example, In the Upper Room, it’s no less brilliant. And it’s purely abstract – it has no intended (or transmitted) “meaning” other than, perhaps, to honor Brahms’s celebration of Haydn.

Not surprisingly given its title, the ballet is a series of variations on a theme – but it’s not as dry as that simplistic description implies, and once it gets moving it proceeds in brief visual explosions until its powerful conclusion. It’s a large piece featuring five lead couples, two featured couples, and a sixteen-dancer corps. The lead couples (who are not consistently paired with each other) at Wednesday’s performance were Gillian Murphy and Gomes, Skylar Brandt and Arron Scott, Isabella Boylston and Alban Lendorf, Christine Shevchenko and Joseph Gorak, and Sarah Lane and Craig Salstein. Brandt was a particular standout, but Boylston stood out as well – for the wrong reasons. With more choreographic pizazz to her role than the other ballerinas, she delivered the power as she usually does…aggressively, but overdid it in several instances, throwing off her landings and appearing decidedly unclassical.

Finally, as I’ve frequently observed, a ballet is “lost” or danced infrequently, for a reason. Symphonic Variations, the middle piece in the program, is an example. Aside from the luscious stage-spanning abstract rear curtain (designed by Sophie Fedorovitch), the piece looks, choreographically, very similar to Ashton’s Monotones and the other “Monotone-related” pieces I discussed in the Sarasota Ballet’s visit to the Joyce Theater last August. It’s perfect. It’s also deadly dull. [If Tharp’s piece is not as dry as the term “variations on a theme” might connote, this Ashton piece is.] Whatever choreographic excitement there might be is quickly overwhelmed by perfectly created steps that say nothing and do nothing except fit the music. The three pairs of dancers (Luciana Paris and Cameron McCune, Shevchenko and Royal, and Cassandra Trenary and Lendorf, executed well enough, particularly Shevchenko, but it was generally by the numbers – although I doubt that added “oomph” would have helped.. And it’s somewhat ironic that Lendorf, a principal dancer with the Royal Danish Ballet, in his first New York appearance as a member of ABT (he joined the company last year but was sidelined by an injury all year) – indeed, in his first set of combinations – danced a sequence of steps that could have been lifted from Bournonville. 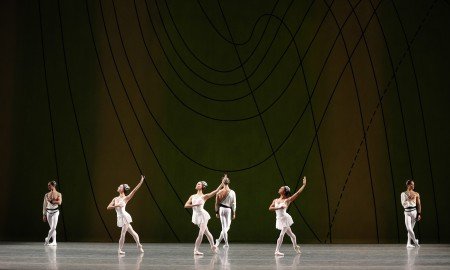 Whether the two premieres scheduled later this week, one by Benjamin Millepied and one by Jessica Lang, help advance the ball and make this season more than a brief opportunity to show that its corps dancers and soloists are top notch and deserve more meaningful performing opportunities during ABT’s Met season than they get, remains to be seen.

It must be noted, however, that there seems to be a sea change taking place at ABT. In recent years, the company has engaged a plethora of guest artists, eliminating performing opportunities for its own dancers to assay lead roles in full length ballets – a situation that I and others have complained about repeatedly. Suddenly this past Met season, for whatever reason, guest artists (and principals who essentially are guest artists) appeared in diminishing number, and opportunities for soloists and corps dancers increased correspondingly. Concurrently with this is ABT’s apparent decision to remake its Jacqueline Kennedy Onassis School with the appointment of Cynthia Harvey as its Artistic Director, and its belated change of marketing strategy (emulating New York City Ballet’s highly successful program) by making its dancers look less like gods and goddesses and more like extraordinarily talented dancers next door.  These are positive, and essential, developments for the company that will pay dividends in the long run.