American Ballet Theatre opened its two week Fall 2017 season at the David H. Koch Theater, and its commemoration of the 25th Anniversary of Artistic Director Kevin McKenzie’s stewardship, with a Gala that took its cue from recent galas by the theater’s home company – New York City Ballet – by celebrating its future.

While the season overall, at least on paper, appears to be one of the least interesting ABT Fall seasons in recent years, with programming that is largely comprised of dances New York audiences have already, and recently, seen, the Gala featured two of the three world premieres that ABT has heralded as the season’s highlights: Jessica Lang’s The Gift, a tribute to McKenzie and the young dancers that the company is nurturing, and Songs of Bukovina, by the company’s Artist in Residence, Alexei Ratmansky. Both are important, but for different reasons.

Students from ABT’s Jacqueline Kennedy Onassis School
and ABT Studio Company, and ABT apprentices,
in Jessica Lang’s “The Gift”
Photo by Marty Sohl

Since it’s a piece d’occasion and may not be repeated (and if it is, it likely will be only for another special occasion), I’ll address The Gift only briefly. Officially “a silver jubilee to celebrate 25 years of McKenzie’s leadership,” which it communicated with abundant “silver” references, its concurrent but more significant function was to provide the Gala audience (and donors) a preview of ABT’s future dancers. Featuring a small army of students from two upper levels of the company’s affiliated Jacqueline Kennedy Onassis School (under the leadership of Artistic Director Cynthia Harvey), young dancers in the ABT Studio Company (Kate Lydon, Artistic Director), and newly minted company apprentices, Lang has created a highly enjoyable dance that showcases everyone within the limits of their current abilities. It’s a bit like Etudes meets a Grand Defile (with a steal from Balanchine’s Serenade thrown in), but without Etude‘s sense of competition or the size, spectacle, or rigid segmentation of a Grand Defile. It serves its purpose of highlighting these students/young dancers’ accomplishments without singling out any individuals, and being highly enjoyable at the same time.

Songs of Bukovina is on a significantly higher level. It’s in the same dance league, choreographically and spiritually, as his superb Russian Seasons for NYCB, although it’s considerably less culturally panoramic, and less complex, than that masterwork. And together with getting a first view of this finely honed new ballet, the Gala audience was unexpectedly treated to another sensational outing from newly promoted Principal, Christine Shevchenko.

Discussing dances created by Ratmansky is getting a bit tiring, because with rare exception they’re always interesting, intelligent, and brilliantly crafted. I may at times find them too dense, but the qualities that make him the most cerebral of contemporary choreographers are usually present. His new ballet is no exception. 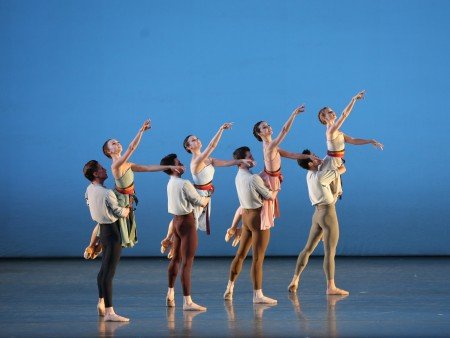 Songs of Bukovina emphasizes several interrelated components of Ratmansky’s choreographic persona, at least as I’ve seen it. I’ve mentioned many times that in the humanity that he brings to his ballet characters, he’s a 21st Century  Jerome Robbins. Unless he’s crafting a purely abstract, non-narrative ballet or an historically accurate recreation, his characters are real even if they’re stepping out of a world that no longer exists, or never did. And, like Robbins (and admittedly other choreographers), one of his ballets breeds another. As Robbins’s Other Dances, which ABT is presenting this season, is considered, in its of use Chopin and its folk-derived style, to be a spinoff of his earlier Dances at a Gathering (as the New York Times Chief Dance Critic Clive Barnes observed in his November, 1976 review of Other Dances), so Songs of Bukovina can be considered a spinoff of Russian Seasons and, to a lesser extent, his brilliant Odessa – all three of which are choreographed to music by Leonid Desyatnikov. [Songs of Bukovinas score is excerpts from Desyatnikov’s Bukovinian Songs (24 Preludes for Piano). The commendable piano soloist was Alexey Goribol. Yes, Virginia, it’s another piano ballet.]

Songs of Bukovina is a direct successor to Russian Seasons in its folk idiom (which Ratmansky uses as a framework for original choreography, as he did with his earlier ballet) – but where Russian Seasons focused on music and dance derived from Russia’s Lake District,  Songs of Bukovina derives its folk and musical inspiration from Bukovina, a region that was included in the Austro-Hungarian Empire until World War II, and at one point or another was considered either part of Ukraine (or the Russian Empire) or Romania – and it’s close geographically (and ethnically, at least as of the turn of the 20th Century) to Odessa. Bukovina now is divided, its northern half in Ukraine, its southern half in Romania. The area has a long, fascinating, and painful history, which I’ll resist the temptation to detail here.

Russian Seasons is seamlessly subdivided into various religious and cultural ritualistic milestones, although it isn’t necessary to know what these are to appreciate the ballet. The same can be said of Songs of Bukovina. I don’t know exactly what specific event the ballet is referencing, and there’s nothing that I could detect as ceremony (and, as usual with Ratmansky, there are no accompanying program notes), but I can surmise from the nature of the dancing and expressions by the dance’s lead couple that it’s a distillation of the celebration of an engagement or wedding – the pair dances with intentional intensity in the initial duet and solos, and with smiles on their more relaxed faces in the later ones, as if some degree of uncertainty has passed or some hurdle has been successfully overcome.

In addition to the featured couple, the dance includes four couples who act as a village chorus to frame the presentation of the leads, but they also independently set the ballet’s folk choreographic and emotional atmosphere. On one hand, primarily via this chorus, the dance seems fluid but not feverish, akin to, but different from, the folk-inspired choreography in Russian Seasons, and with a slight amount of intended rigidity – perhaps indicative of some ritual framework. On the other hand, the dances by the leads are considerably more vibrant; more feisty. And I observed a sampling of gypsy dance in the featured dances, which would be appropriate considering the cultural blending that likely occurred in Bukovina over the centuries. 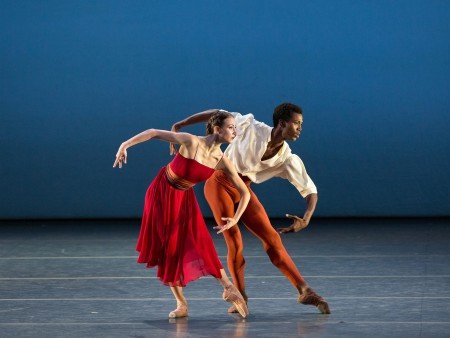 The ballet’s lead couple was originally scheduled to be Isabella Boylston and Alban Lendorf, but due to an injury to Lendorf, the “second cast” replaced them. Of course I cannot comment on how the “first cast” will eventually handle their roles, but the performance by Shevchencko (and also by her partner, newly promoted Soloist Calvin Royal III) was memorable.

Royal did excellent work, both on his own and partnering, making effective use of the long arms I noticed on his first appearance with ABT. But Shevchenko was a firecracker, and I suspect that her possible affinity with the subject (her heritage is Ukrainian, and she was born in Odessa) might have something to do with it. Regardless, her portrayal was akin to her Kitri in last Spring’s Met Season – spirited, fiery, and crystalline. Her artistic growth since she joined ABT has been a joy to watch.

The evening concluded with Christopher Wheeldon’s Thirteen Diversions, which I’ve reviewed many times. Although it’s somewhat cold and distant (which the variable color-block, contrasting-line lighting by Brad Fields across the stage’s back wall reflects and enhances), it’s one of Wheeldon’s better pieces, and was given fine performances by the lead couples (Misty Copeland and Gray Davis, Stella Abrera and Thomas Forster, Sarah Lane and Joseph Gorak, and Skylar Brandt and Zhiyao Zhang) and the corps of sixteen.

Each of these dancers is a relatively recently promoted Principal or Soloist, and all came up through the ABT ranks. I’ve mentioned previously that this represents a commendable sea change in the way ABT sees and promotes itself. If this is in fact what is happening (as the Spring 2018 Met Season casting may further demonstrate), this, much more than its bloated 75th Anniversary celebration and it’s overuse of guest artists, will be McKenzie’s admirable legacy. The company has a lot to look forward to as long as it continues to showcase and provide growth opportunities for its home-grown dancers.