If you’re obsessed with dance history, as American Ballet Theatre’s Artist in Residence Alexei Ratmansky is, then you may already know that Harlequinade premiered in 1900 in St. Petersburg, Russia. Ratmansky carefully reconstructed Marius Petipa’s steps by studying Stepanov notations from the Harvard Theatre Collection, resulting in the staging of Harlequinade that premiered in June 2018 at the Metropolitan Opera House. If you’re not interested in dance history, then Harlequinade may disappoint you. On the other hand, you might easily overlook the insipid plot if you’re used to enjoying older classical ballets with similar storylines — a father refuses to let his daughter marry the penniless man she loves and tries to arrange her marriage to a pompous wealthy man instead, but a good fairy intervenes, true love prevails, and the wedding festivities include a lot of distinct dances by various groups of well-wishers. The plot is not terribly important, except that this is a comic ballet, so you can feel confident about laughing. I figure that there’s political commentary embedded in Harlequinade particular to its original time that goes over my head. It was nice to leave politics behind and simply appreciate the humor and the spectacle. 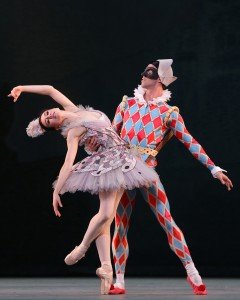 Like the Christmas classic, The Nutcracker, ABT’s Harlequinade features sweetness, silliness, striking costumes, and a ton of talented children. In fact, the children, in this case students of The Washington School of Ballet, have quite large part in the production. The rapturous applause for the thirty-four young dancers on opening night almost exceeded that for the adults. While the students surely had parents, grandparents, and siblings in the audience who would have been cheering for them regardless of the quality of the performance, there’s no dispute that the young dancers deserved the enthusiastic recognition they received. The students adeptly tackled the challenging choreography, managing to stay in sync while executing the steps crisply and daintily. They also looked extraordinarily cute, especially when their small heads purposefully bobbed back and forth.

The costumes by Robert Perdziola, inspired by the original designs, however, are the real stars of the show. The costumes are so colorful, so detailed, so unique. One’s eyes during Act II’s wedding celebration barely know where to look, the richness, vibrancy, and diversity of the patterns is so strong. The wigs, the hats, the shoes, everything is eye-catching. Watching Act II was like witnessing an entire costume shop explode on stage along with a stained glass factory. Pictures won’t give you the same effect as seeing this visual miracle in person. 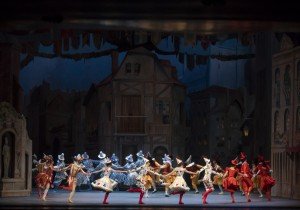 The choreography, in my view, offers few thrills, but it does deliver abundant charm. ABT’s dancers danced superbly, but I couldn’t help but feel that seeing them do Harlequinade was a bit of a waste. The strength of this cast of ABT dancers tends to be sharp technique rather than acting. Harlequinade’s demanding mime and comedic characterizations stretched the company, and I don’t think the cast I saw always adequately captured the ballet’s innate levity.

James Whiteside as Harlequin did all right, but his high-flying jumps got more emphasis than his clowning. On the other hand, wearing a mask as his character does means having to emote even more than usual, and the twisting tassels on the ends of his bicorn hat were distracting, both of which may have impacted the audience’s perception. Thomas Forster as Pierrot fared a little better. I found him to be funnier, but that was due at least in part to the exaggeratedly long sleeves of his outfit, which extend well beyond the hands. When Forster moved his arms excitedly, his sleeves amusingly flopped. Duncan Lyle as Léandre, the wealthy suitor, performed his comic role with aplomb.

Of the female leads, I found Stella Abrera as Pierrette to be the most enchanting. Sparks flew when she danced. Both Isabella Boylston as Columbine and Tatiana Ratmansky as the Good Fairy, did a fine job in roles that are admittedly more “straight,” but Abrera surpassed them in her ability to keep me on the edge of my seat while she danced. Boylston flew as a Lark, Whiteside repeatedly chased and caught her, but despite their elegance and merriment, Abrera is the one who kept my gaze because she danced with the most abandon. 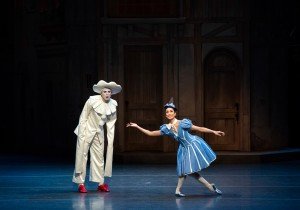 Go to see Harlequinade if you like costumes and kids and clowns and pleasant diversions, skip it if you’re seeking serious amazing dancing. Unless you’re a dance history scholar, it’s the production elements and the wit of Harlequinade, not the plot and specific steps, that will entertain you.