To date, American Ballet Theatre’s 2017 Met Season  has proven to be far more interesting than one had reason to expect. The excitement continued with last week’s performances of Le Corsaire and unscheduled lead role debuts by two of ABT’s soloists: Christine Shevchenko and Skylar Brandt. Each delivered memorable portrayals.

Le Corsaire is not one of my favorite ballets. In recent years, I’ve found it to be too silly either to be believable or to want to believe in, and essentially filled with cardboard characters and, except for some admitted choreographic highpoints, cardboard choreography to match. But perhaps because of the significant role debuts, I’m warming to it.

Much of what I perceived as silliness is a consequence of its historical context. Based on the 1814 poem The Corsair by Lord Byron (arguably a romanticization of the life of the legendary pirate Jean Lafitte), the ballet initially premiered in 1856, and was re-choreographed by Marius Petipa for the Mariinsky in 1899. The latter version is what has essentially survived. [ABT’s version, first presented by the company in 1998, was staged by Anna-Marie Holmes, with choreography by Konstantin Sergeyev after Petipa.] So although Le Corsaire’s most direct roots, via Petipa, are Classical, it also displays characteristics of Romantic ballets. Indeed, in its original incarnation, it’s often classified as a Romantic ballet, and its initial score was composed by Adolph Adam, who created the score for Giselle. 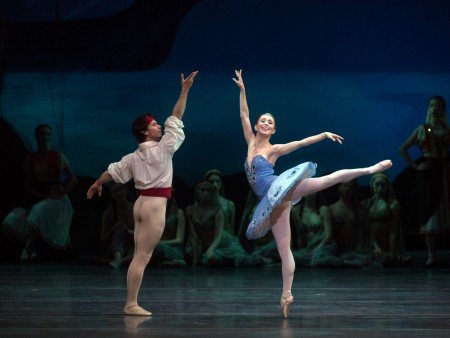 And, for better or worse, Le Corsaire is imbued with the Orientalism of the period. Pirates sail to Turkey, for no particular reason except that they’re exotic characters and it’s an exotic location. Upon arrival, they find themselves in a marketplace where slave girls are being sold by the bazaar’s avaricious owner, Lankendem. One, Medora, is paraded in front of Conrad, the chief pirate who seems constantly to finish every motion with his right hand authoritatively and/or commandingly thrust into the air (his character is, after all, based on a Byronic hero), and they instantly fall in love. Conrad wants to buy her, but Lankendem laughs him off because he knows Conrad can’t afford her. So, being a pirate and all, Conrad instead decides to kidnap her, and orders his faithful Indian companion, er, slave Ali to handle it. Before that happens, into the bazaar comes the local Pasha, a fool of a ruler with tons of money to burn on slave girls, which provides the excuse for dances by a bevy of scantily-clad potential acquisitions. Eventually, the Pasha (the Turkish version of the rich, foolish Tsars portrayed in several other Russian ballets) buys Medora as well as another slave girl, Gulnare (after all, a man’s reach should exceed his grasps, or what’s a harem for).

After securing Medora, along with a trove of slave girls and Lankendem himself, and after one of the most sizzling pas de deux/trois in ballet, Conrad agrees with Medora’s pleas to release the other slave girls (thereby cementing his credentials as a forward-thinking pirate), which earns the enmity of other pirates, including Conrad’s nasty second fiddle, Birbanto. Birbanto and his cohorts plot against Conrad and Medora, but the mutiny fails thanks to feisty Medora (a thoroughly modern 19th century slave girl). But Lankendem escapes, taking his slave girls – including Medora – with him. In the final act, the Pasha dreams of his growing bounty of beauties (this is a Petipa ballet; there’s a dream scene), but Conrad steals back Medora, along with Gulnare and hangers on (killing the traitor Birbanto in the process), they flee to Conrad’s pirate ship, and faster than you can say ‘it’s time for this thing to end’ a storm hits, waves rise up and sink the ship (the pirate version of temple stones falling in the conclusion of La Bayadere), and Conrad and Medora just happen to find an isolated rock on which to live happily ever after.

If Le Corsaire had been a comic operetta, it would have been by Gilbert and Sullivan. 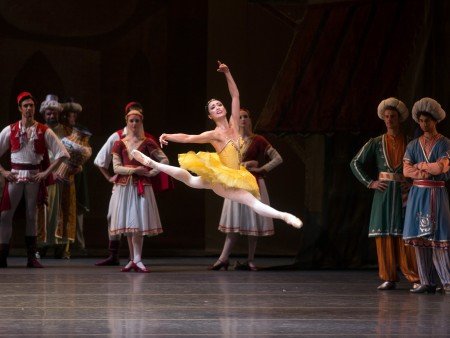 But I see more clearly now that what I thought was a turkey of a ballet isn’t what it seemed, and, while hardly a great ballet, Le Corsaire is well worth seeing – especially with the casts I saw last week. Here, Petipa has utilized the formula he used so well in Don Quixote and La Bayadere, and with Holmes’s staging, the ballet never stops moving. Le Corsaire is stuffed with tons of dance, and unlike most full-length ballets of the late 19th century, provides many role opportunities in addition to the two leads. From the Odalisques pas de trois, to a pas de deux between Gulnare and Lankendem, to the Conrad/Ali/Medora pas de trois, to a Medora/Conrad pas de deux, to the Jardin Anime dream scene (involving a cast of 26 plus 16 students from ABT’s Jacqueline Kennedy Onassis School), and to a slew of solos and ensemble divertissements, Le Corsaire is chock full of dances that are sufficient to enable a viewer to overlook the plot.

But the excitement at the two performances I saw took the ballet to another level. Opportunities arose that once again demonstrated the quality of ABT’s soloists, and perhaps also that these dancers should have been awarded a shot at these roles in the normal course, without having to wait for injuries to thrust them into the limelight. 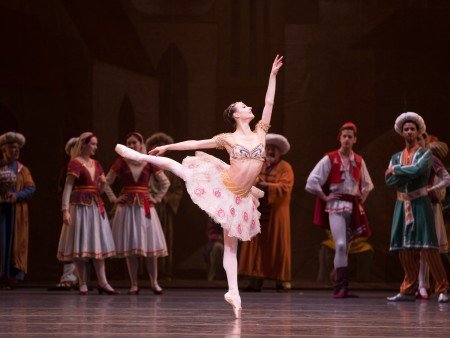 What’s most remarkable about Shevchenko’s and Brandt’s performances is not that they were capable of doing it, but that, to my understanding, they learned their roles on short notice. Le Corsaire may be a silly ballet, but the role of Medora is not a silly role. On the contrary, it’s highly demanding, and one that not only requires superb technique, but also acting that bridges comedy and romantic passion.

Brandt has made a distinctive impression since joining the company in 2011, following stints as an apprentice and with ABT 2. Less than six months after she joined the company, I watched her, together with Nicole Graneiro, light up the stage as the “sprites in red toe shoes” in Twyla Tharp’s In The Upper Room. At the time, I observed that “seeing someone so young [Brandt] dance with such a combination of speed, control, and precision was breathtaking.” Those qualities have been a hallmark of her performances since then. But I’ve had little opportunity to see her “act” beyond the one-dimensional acting that’s a component of certain roles (e.g., the Fairy Canari qui chante in Alexei Ratmansky’s The Sleeping Beauty and Giselle’s peasant pas de deux). Medora remedied that.

I was unable to see Brandt’s debut on Monday, but on Thursday evening, she delivered a super performance technically (including pirouettes in which she whirled like a spinning top on steroids, and finished her Act II fouettés with a triple), and handled the requisite acting very well. Hers was a soft-edged Medora, a bit more sweet than usual, but that quality only emphasized the passion she delivered sensationally in Act II’s pas de trois and pas de deux, and the ‘teasy’ way in which she played with the Pasha. For a slave girl, she was having tons of fun. She needs to be careful, however, when she completes a phrase with her mouth open. It’s not nearly as pronounced as some other ballerinas do, but even minimally, when it happens regularly, it looks too self-celebratory. 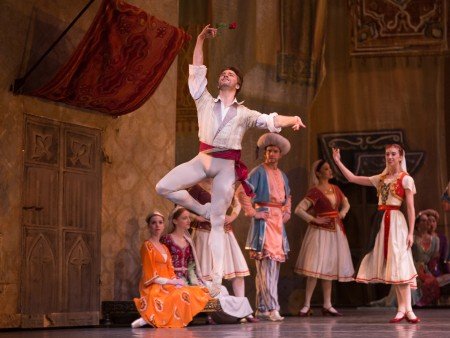 Shevchenko, who has already delivered blistering debut performances this season as Kitri in Don Quixote and Myrta in Giselle, shined in her debut as Medora as well. She played Medora, not inappropriately, much like her Kitri (indeed, aspects of the roles are similar) – more feisty than sweet, and with abundant personal charisma. And her solo execution was top notch. To me, she seemed a bit tentative and  stiff in the pas de trois, but this was a debut performance, and an unanticipated one at that, so it would be natural for her to be concentrating more than she would with a performance or two under her belt. Overall, it was another outstanding outing by Shevchenko this season.

These were not the only role debuts. On Wednesday afternoon, Alban Lendorf debuted as Conrad, and although his performance seemed somewhat mechanical at the ballet’s outset (which could be because the choreography seems somewhat mechanical at the outset as well), but improved significantly as the ballet progressed. And his partnering of Shevchenko was stellar throughout. As Lankendem, Gabe Stone Shayer danced (including highly accomplished partnering) and acted with exceptional clarity for a debut; he deserves the opportunities he’s been getting. I had not seen Arron Scott previously as Birbanto, and his portrayal was crisply aggressive and on-target. The role of Gulnare requires some degree of understatement, but I thought Stella Abrera’s portrayal was a bit too monochromatic initially. That being said, she executed her Act I pas de deux very well. 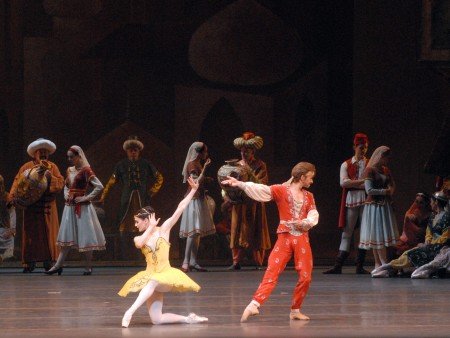 But aside from Shevchenko, Wednesday’s performance belonged to Daniil Simkin. The role of the slave Ali seems made for his explosive physicality, and he provided Wednesday’s audience with visual adrenaline shots every time he did one of his “tricks,” which was as often as the basic choreography would allow. But I thought Simkin did just as well, if not better, as Lankendem at Thursday’s performance, where he had a greater opportunity to display his acting prowess (if there’s one role that might be accused of reflecting unfortunate stereotypes, it’s Lankendem, not, as some claim, the Pasha, but that’s a thesis for another day) as well as his much improved partnering.

On Thursday, Herman Cornejo’s Conrad showed the benefit of experience in the role. His portrayal was more modulated than Lendorf’s, which made him appear more powerful and, perhaps strangely, more cerebral. As Ali, Jeffrey Cirio, who debuted in the role earlier in the week, did a fine job, but for this role, I found his execution a bit too academic. Craig Salstein’s Birbanto has been finely tuned over time, and his is a most compelling portrayal. And as Gulnare, Sarah Lane provided another of her outstanding performances, delivering a more animated portrayal than by Abrera on Wednesday, and one that was technically crystalline – although she attempted too much in the Act I diagonal. 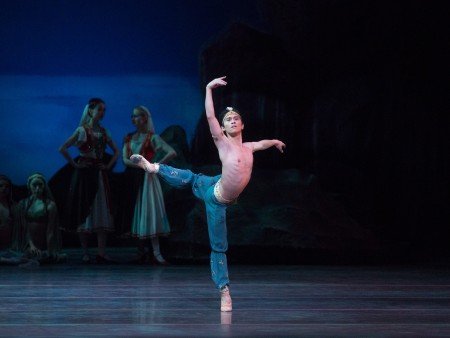 The Odalisque pas de trois in Act I provides the ballet’s initial “real” choreography, and the distinctive solos within its ambit are as entertaining as they are complex. The roles were danced by Melanie Hamrick, Lauren Post, and April Giangeruso, and by Cassandra Trenary, Katherine Williams, and Giangeruso on Wednesday and Thursday respectively. All did fine work, but I was particularly impressed by Giangeruso and Williams, both of whom deserve more role opportunities than they get. And in the Pirates Dance with the “Lead Pirate Woman” and Birbanto, Alexandra Basmagi executed very well, but could have shown a bit more flair, while Zhong-Jing Fang’s portrayal on Thursday had flair to spare, but needs to tone it down a bit (especially the open-mouth punctuations).

So far this season ABT is, finally, showing off the depth that it has always had, but which has heretofore been kept under wraps. I’ve written often about New York City Ballet’s embarrassment of riches, which is due in part to the opportunities provided for its young ballerinas to assay roles and for its audiences to watch them grow. It may be inadvertent, a consequence of injuries, but so far this season ABT is, at last , displaying its own riches and its own depth. It’s too soon to tell for sure, but in front of our eyes it’s beginning to look more like a complete company.