During the opening night of American Ballet Theatre’s visit to the nation’s capital, the President of the United States delivered the State of the Union address. The Kennedy Center audience, however, happily paid attention instead to the state of ballet. ABT’s report card was very good.

The first work on the program, Serenade after Plato’s Symposium choreographed by Alexei Ratmansky, caused a sensation, setting the audience abuzz afterward with jubilant exclamations. I overheard people gush, “Brilliant!” and “Amazing!” And it was. I already long to see it again. I can’t recall a recent work so plump with male talent. In particular, Jeffrey Cirio, Calvin Royal III, and Daniil Simkin stood out to me, although the other men (Alexandre Hammoudi, Blaine Hoven, Gabe Stone Shayer, and a handsomely bearded James Whiteside) performed superbly, too. I shouldn’t leave out the lone female dancer, Devon Teuscher, whose dancing I cannot fault, but honestly, given the strength of the men and their numbers, it was easy to overlook her small part. 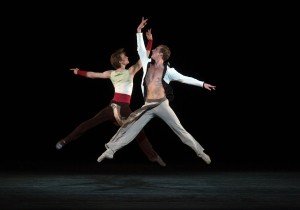 I didn’t closely read the program notes until after I’d seen Serenade after Plato’s Symposium. I wasn’t familiar with Leonard Bernstein’s music by the same name and have only vague memories of studying Plato in school. Nonetheless, I understood that the men in Ratmansky’s piece were conversing about something important, I just wasn’t sure what. Gentle discussion, through movement, developed into something more animated over time. There were dancing debates, ranging from light and casual to serious. Discovering subsequently that the subject under discussion was love didn’t surprise me, exactly. After I read the program notes, I immediately pegged Teuscher as “Love.” Still, I could have done without her addition to the work. So stunningly gorgeous were the men that I wanted to continue reveling in only them.

What I liked best about this Ratmansky gem was the way the individual performers shone. All the men, frankly, came across as worthy of stardom. More than the ensemble work, their solo turns were spectacular. I don’t get a chanced to see ABT very often, but Cirio and Royal were transformed and hardly resembled the dancers I remember. Cirio simply exploded with drama and Royal’s long limbs elegantly swept and stretched to infinity. I was hooked on Simkin the from the first time I saw him dance, and he did not disappoint. Physically slighter than the rest, he somehow seemed to soar higher, and it was difficult to take my eyes off of him. He moved in a spritely fashion, springing off beautifully pointed feet. Although the men appeared to breeze through the often fast footwork, the amount of sweat flinging from them as they spun highlighted their effort. 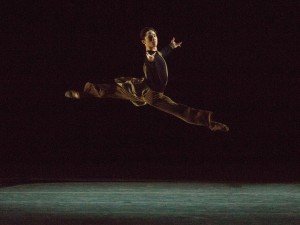 The scenery and costumes by Jerome Kaplan and lighting by Brad Fields did the job. The costumes, like the choreography, enhanced the individuality of the dancers. The Greek-inspired colorblocked costumes for the men in subdued colors (black, white, gray, copper, brown, etc.) each showed off a drapey element evoking a toga without disturbing the lines of the arms and legs. Teuscher was clothed in a lovely turquoise Greek goddess style dress, and her long hair tumbled down her back. In the beginning, a screen with Greek lettering that I learned spelled out “Symposium” floated above the stage. This screen later tilted and the lettering disappeared. Thus the screen became a bare white tent top hovering above the dancers and reflecting light. Violin soloist Kobi Malkin and conductor Ormsby Wilkins more than did their jobs, the music excelled. 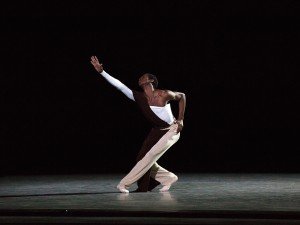 Although three of the works on ABT’s opening night were by popular contemporary ballet choreographers, sharing the program was Other Dances by Jerome Robbins. I’m not certain whether all of the choreographers featured on the program will hold up to Robbins’ genius, but among them I’d bet Ratmansky will stand the test of time. Robbins’ choreography definitely does this. His timeless Other Dances is a masterwork. With Isabella Boylston and Cory Stearns in this duet, though, the dancing didn’t quite sing as it should. Rather than Boylston and Stearns, the stars of Other Dances on this night were the wonderful piano soloist Emily Wong and Robbins’ comely choreography.

Boylston and Stearns danced better than competently, but they stopped short of being truly inspiring. The pair needed to exhibit a touch more abandon. Robbins’ movement is silky and sumptuous and yet speaks loudly. And speaking of speaking, I could’ve sworn I heard Boylston mutter something to Stearns at one point, but maybe it was just my ears playing tricks on me. 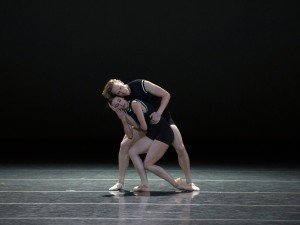 I disliked Benjamin Millepied’s I Feel the Earth Move. Behind me in the audience, a woman whispered a warning to her companion before the work began, “Oh, this one isn’t going to be good.” Although I have enjoyed some of Millepied’s choreography, on the whole he has not produced dances that captivate me. My reaction to I Feel the Earth Move was actively negative. This is no doubt because of the overall power of the program and skill of ABT’s dancers that I felt wasn’t put to good use. It’s also because I adore David Hallberg, and I couldn’t help but think, “He returned from injury to do this?” Millepied’s choreography didn’t give Hallberg or his partner Misty Copeland an opportunity to look like stars. In the vastness of the empty exposed stage, denuded of wings and backdrop, they looked tiny and lost.

The work began with a parade of women in swim trunk-short shorts and sleeveless athletic tops from rag & bone. They walked by like a gaggle of models in a music video. Later some of the flock donned bandanas over their lower faces as if they were worried about canisters of tear gas being released. Barefoot, they also stood in line Rockettes style and swivelled their heads and legs to do a “wave.”  I was also reminded of synchronized swimmers, as in a group dancers one by one extended an arm into the sky.

While Millepied’s I Feel the Earth Move appeared to be an attempt to create something chic and hip, the choice of music by Philip Glass, excerpts from his abstract opera Einstein on the Beach, written in 1975, was a poor fit for the movement. The music, in fact, grated on my nerves. Random bits of nonsense language distracted me. Singing about a fridge while Hallberg is using his glorious instrument? Weird, and worse than that, somehow sad. Only Herman Cornejo in the third movement seemed to come alive, and he received a smattering of applause from a single audience member who felt moved. 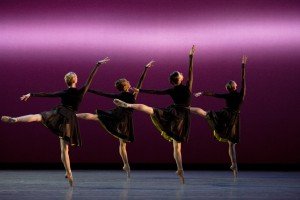 ABT in Christopher Wheeldon’s Thirteen-Diversions, photo by Gene Schiavone

Closing the evening was Thirteen Diversions, choreographed by Christopher Wheeldon to music by Benjamin Britten. Fields’ lighting design took on a dancer-like role as a triangle of light crept onto the stage, growing to reach from corner to corner of the scrim. The lighting changed throughout the work, with strips of light moving up and down and color entering the scene. The costumes by Bob Crowley were for two groups — one set in black, the other in a pale grayish white. The costumes recalled classic formal wear with cumerbunds. Wide ribbons on the underside of the women’s longish skirts boasted brighter colors — vibrant pink and yellow. Earrings sparkled.

The dancing, too, had an air of formality, of classicism, sprinkled with sparkles and brightness and playful color. Unfortunately, a beloved ballerina I’ve decided not to name slipped and found herself all the way down on her hands and knees. Obviously, such a spill was accompanied by gasps from the audience. Yet like the professional she is, this dancer got up and kept dancing and thankfully seemed to have injured only her pride. I was asked not long ago by someone about whether ballerinas ever “splat” during a performance. It’s not like in ice skating. It rarely happens, especially in such high level performances, but it happens once in a blue moon. Maybe the moon was to blame?

I thought Wheeldon’s Thirteen Diversions was ok. It was nice. I felt like you would about getting an average-looking sweater from an aunt at Christmas. It was fine, but for some reason it didn’t generate a ton of feeling on my behalf. Nothing, however, could dim the memory of Ratmansky’s Serenade after Plato’s Symposium, which I actually woke up thinking about the next day. What a gift!