October 29, 2016 (afternoon and evening)
Monotones I and II, Her Notes, Prodigal Son, Daphnis and Chloe

For its brief Fall 2016 Season at the Koch Theater, American Ballet Theatre included a world premiere, Her Notes, choreographed by Jessica Lang, and the company premiere of Benjamin Millepied’s Daphnis and Chloe. I caught up with them, and two other dances I’d not yet seen this Fall, on the penultimate day of its season. Of the two, Lang’s dance is a delightfully accomplished piece of work; Millepied’s isn’t.

At the outset, however, I must highlight the glittering performances I saw of Sir Frederick Ashton’s Monotones I and II (the casts at both performances were the same).

When ABT returned the companion ballets to its repertoire last year, I was disappointed that they didn’t live up to my recollection of the Joffrey Ballet production of Monotones II at City Center in the mid-1970s, and I concluded that perhaps Monotones – like certain other Ashton ballets – did not stand the test of time and is no longer as significant a set of pieces as I thought it had been.

I was wrong. With the right dancers, and the right level of preparation, the piece is as mesmerizing now as it was when I first saw it. 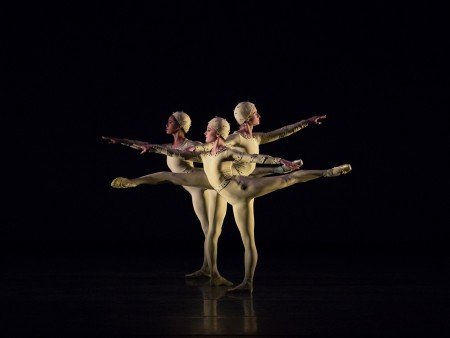 Monotones I lacks the infinite cosmic sense that Ashton delivers so well in Monotones II, but Saturday’s cast (Sarah Lane, Misty Copeland, and Daniil Simkin) made it sing. Both Copeland and Simkin did impeccable work, and Copeland’s execution has improved significantly from last year. All three dancers appeared almost totally in sync. [The sublime difficulty is to look in sync throughout, but not to look robotic.] But the most marked difference between this year and last was Lane’s appearance in it and her crystalline execution. I’d not seen her in the piece previously (this season may have been her first dancing it), and her position in the trio put her front and center for much of the dance. Consequently, her role had to be superbly executed. It was. And in Monotones II, the cast (Veronika Part, Cory Stearns and Thomas Forster) was identical to the first cast I saw last year, but all three have grown into their roles. Last year, for example, I observed that Part imbued her role with considerable pathos, which she’s very good at but which is inappropriate here (a mournful celestial body seems an oxymoron), and that the partnering wasn’t as crisp as it needed to be. Saturday’s performances were remarkable on all levels, and Part’s was as fine a rendering as I’ve seen anywhere at any time. Both pieces were delivered so spellbindingly well that they commanded, and received, rapt attention: sitting in the audience, you could hear a pin drop. 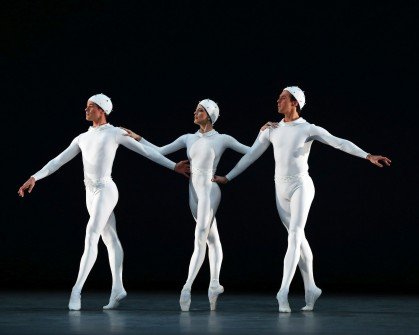 Her Notes is a gentle but distinctive dance that succeeds in delivering its simple message in an original, coherent, and entertaining way. Although it’s not about relationships between young lovers or memories thereof, Lang’s piece resonated with me as did Antony Tudor’s The Leaves Are Fading, possibly because, at its heart it is about relationships – the relationship between a woman composer and her thoughts and creations – her notes, the “relationship” among the notes themselves, and the passage of time while the process takes place, all delivered in a straightforward manner and with an atmosphere of melancholy tinged with joy (or vice versa). And what Lang is trying to do is clear as a bell – one knows what’s happening without the need for a doctorate. It’s one of the best “new ballets” by a choreographer other than Alexei Ratmansky that ABT has premiered in a very long time.

The piece is inspired by the life of Fanny Mendelssohn Hensel, Felix Mendelssohn’s sister, who was an accomplished pianist and composer (with over 400 piano pieces to her credit) but was discouraged from public appearances and from publishing her work because this would have been unbecoming to a woman of her social class. Her most famous work, according to the program notes, is Das Jahr (The Year), which chronicles each month in a year-long journey with her husband. She composed a new movement for each month of the year, plus a postlude, which together comprise the entire piece. 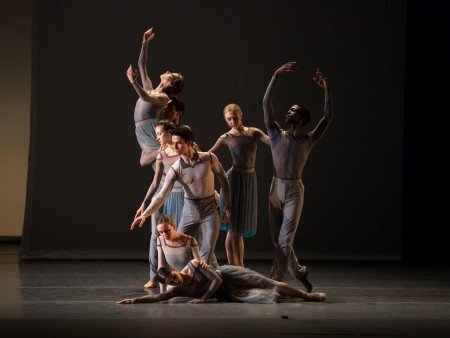 It’s apparent that Stella Abrera represents Fanny Hensel, James Whiteside her husband, and the other eight dancers the notes of Hensel’s music. But one doesn’t need to know all this to appreciate the ballet: the piece is considerably more than “just” the story of Fanny Hensel and her cramped creativity. Her Notes applies universally to situations in which a woman’s creativity and/or intelligence, for whatever reason, is kept hidden from view.

Rather than attempt to utilize every month in the composer’s year, which isn’t the point of the piece, Lang has choreographed Her Notes to a representative sampling of excerpts from Das Jahr: an introductory segment that’s not attributed to any specific movement, February, June, December, and the postlude. The compositional scope was delineated perfectly – there is no need for more, and less might have cut too deeply into the fabric of the dance.

The piece opens with dancers in shadow behind a square shaped “wall” with one cut-out “window”. The wall is transparent, permitting a view of the dancers assembled behind it, and a sole woman (Abrera) beneath the window struggling to be seen, and heard: to escape. One man (Whiteside) dances alone outside the wall.

Eventually the dancers, her notes, are illuminated and they in turn illuminate the music that streams from the woman’s dreams, desperation, and boundless creativity despite the boundary that surrounds her. At times (e.g., June), Abrera (who dances and emotes magnificently throughout the piece) and Whiteside dance pas de deux of muted passion and obvious desperation, but these episodes are descriptive of what she’s missing (or dreaming about), as well as his loyal and loving but leaden response, and don’t move the piece forward – the music in her mind does. Eventually the wall (which was raised once the dancing began) is lowered back over the woman’s head; and her notes return to their place in shadow behind it.

While Abrera and Whiteside may be a focus, the bulk of the action is provided by the dancers who visually manifest the woman’s  musical notes: Isabella Boylston, Jamie Kopit (who deserves special praise for filling in commendably on short notice for Luciana Paris; Cassandra Trenary, a member of the piece’s other cast, replaced Paris in the evening), Christine Shevchenko, Katherine Williams, Lane, Arron Scott, Alexandre Hammoudi, and Calvin Royal III. Like notes and chords in a composition, each individual dancer shines alone or in combination with others, and at times expresses distinctive nuances while still complementing the composition’s other notes. For example, at several points Lane and Boylston execute the same combinations in tandem. Lane’s execution is pitch perfect, with clearly delineated but seamless phrase completions, while in comparison Boylston looked less interested in perfection than in power. But Lang is choreographing at least to some extent to their strengths, and in context both dancers reflect the musical notes they represent perfectly. A similar distinction, though somewhat less pronounced, could be seen in the execution by Williams and Shevchenko, who are frequently paired during the course of the piece. 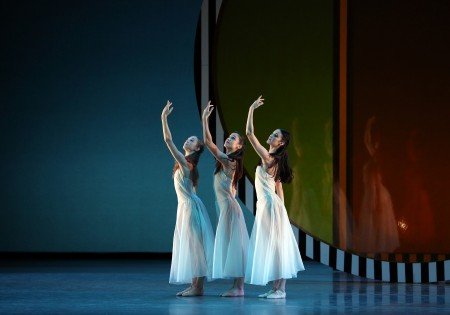 Her Notes is not a ground-breaking ballet, but it doesn’t try to be. It’s a deceptively simple piece of work very well presented, that says what it has to say beautifully, and then ends. Less is more. Millepied’s Daphnis and Chloe, on the other hand, is simple too – but simple in terms of a lack of choreographic substance.

Initially, I must emphasize that the piece, which premiered with the Paris Opera Ballet in 2014, looks striking – albeit in a cold, abstract way, with the opening overture to the Ravel score and accompanying play of projected shapes particularly unusual and interesting, and becoming even more so as the ballet progresses (the designer of these projections is not identified, but the scenery is by Daniel Buren and lighting by Brad Fields). The gorgeously simple costumes (by Holly Hynes) for the nymphs are appropriately sensual, whether in basic white or celebratory colors. But that’s about it.

Millepied here reduces the Daphnis and Chloe story to its essence, a la Balanchine, but without Balanchine’s genius for making the distilled result work. The story is told as a sequence of scenes that simply happen – like a series of divertissements without a core focus. But he has kept the full Ravel score (there is no indication that the composition was excerpted). Consequently, distilling the story to its essence and at the same time using a “full-story” score forces him to pad the distillation to fill the musical space. The result is an awful lot of the same thing that makes for a bloated-looking ballet. For example, Boylston (Chloe) and Marcelo Gomes (Daphnis) dance ardent, somewhat juvenile, and relatively passionless “love” duets well, but Millepied spreads three of them (at least – I might have lost count) throughout the piece – all looking essentially the same. The dances by the nymphs are lovely and lilting and somewhat innocently sensual, but there’s little variety to them until the final scene. And the dances by the black-clad “pirates” who kidnap Chloe, despite heroic efforts by Scott as their leader Bryaxis, are just silly. Indeed, the only level of excitement is generated when the pirates circle Chloe menacingly, but wonder of wonders divine intervention saves the damsel in distress. Deus ex geometrica. And then there’s this celebration of something – presumably the couple’s wedding. Boylston and Gomes do their best to look engaged, but neither of them can save this. 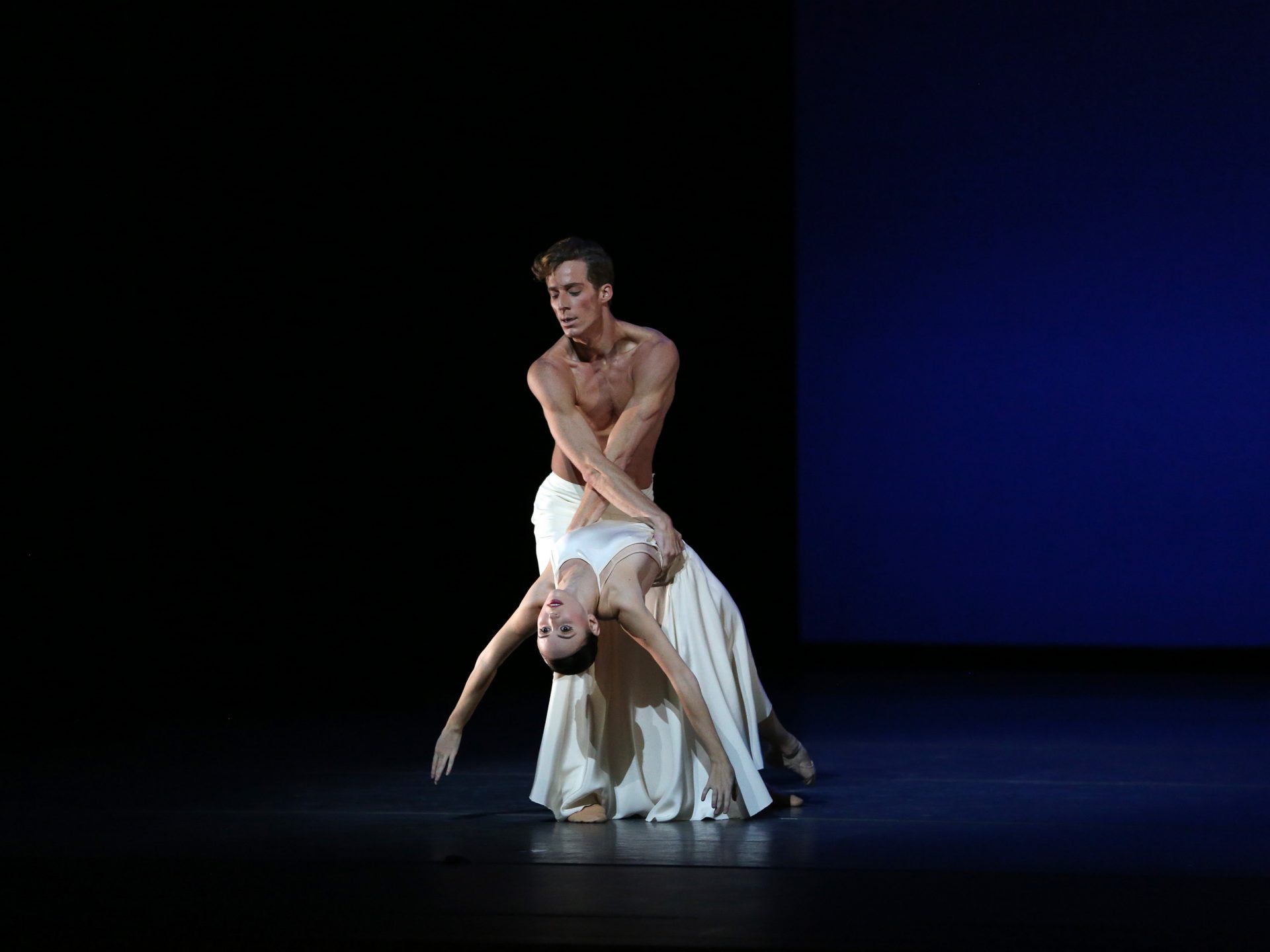 The piece is not without some measure of interest. Blaine Hoven as evil Dorcon partnered cleanly and skillfully (primarily his accomplice, the mischievous Lycenion, danced by Skylar Brandt) and executed his distinctive solo with diabolical panache – his was the only character not cardboard. And Rachel Richardson, who together with Betsy McBride were the lead nymphs among relative equals, danced crisply throughout, and effectively stopped the show (I could hear the audience around me collectively inhale) when she suddenly appears in a killer green dress and dances solo to initiate the celebration.

The afternoon program concluded with Balanchine’s classic, Prodigal Son. New York City Ballet has Balanchine in its genes, and to my eye does a more effective job with it, but the ballet is so good that it stands on its own as a masterpiece even if one or two components are less than perfect. At this performance, Jeffrey Cirio as the prodigal was disappointing in the critical opening scene. For example, at significant moments when the prodigal pounds his fists onto his thighs, Cirio played it as if he was carefully tapping a drum rather than digging into his core. After that, however, Cirio’s execution was quite good. On the other hand, Hee Seo was miscast as The Siren. The role is dependent on the display of controlling irresistibility despite an overtly serene and somewhat mechanical-looking demeanor, solely through the power embedded in her movement and the expression in her eyes. Seo’s demeanor was simply flat almost throughout (she unearthed a sly smile during the pas de deux), making her appear more like a moving mannequin than a commanding seductress. 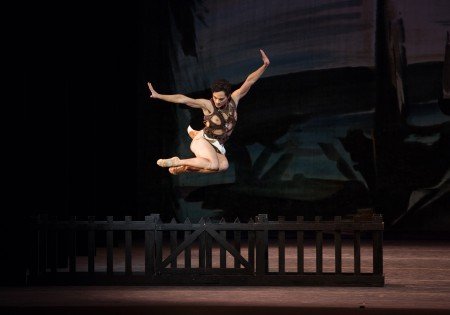 And so, almost as soon as it began, ABT’s Fall 2016 Season ended after providing many opportunities to see corps dancers (and soloists) expand their repertoire and display their talent. Perhaps the apparent new focus on building talent from within may finally enable certain highly promising corps dancers who have been highly promising for too long to be given challenging featured roles during ABT’s 2017 Met season.