In 1985, American Ballet Theatre (“ABT”) premiered Romeo and Juliet, choreographed by Sir Kenneth MacMillan, at Washington, DC’s Kennedy Center for the Performing Arts, and 31 years later, the DC area was treated to this handsome production again at Wolf Trap National Park for the Performing Arts. I was particularly looking forward to this event because the Royal Swedish Ballet’s Juliet and Romeo, choreographed by Mats Ek, which was performed at the Kennedy Center just last month, left me longing for a more classical telling of Shakespeare’s tale of star-crossed lovers. I needed my palate cleansed, and I felt certain ABT’s Romeo and Juliet wouldn’t leave me with a bad aftertaste.  Thankfully, other than my disappointment at the end of Act III, Ek’s contemporary version, including segway riding dancers, was banished from my mind. MacMillan’s version is straightforward and satisfying.

In contrast to Ek’s version, MacMillan’s Romeo and Juliet sticks to the basics, with no ultra-contemporary twists. The costumes and scenery, by Nicholas Georgiadis, evoke Verona and its upper class enemy families. The costumes are largely in earth tones, with lots of dusty browns. The fabrics, many velvets and brocades, look rich and heavy, and also hot. The evening was very steamy, and I imagine the dancers may have sweated more than usual on Wolf Trap’s outdoor Filene Center stage. Stairways as part of the decor add a second level for eyes to explore. At the top of the stairs stone columns with arches above perfectly frame dancers beneath them. And of course there’s a balcony, and even a generously sized bed, with luxurious linens, for the two young lovers. 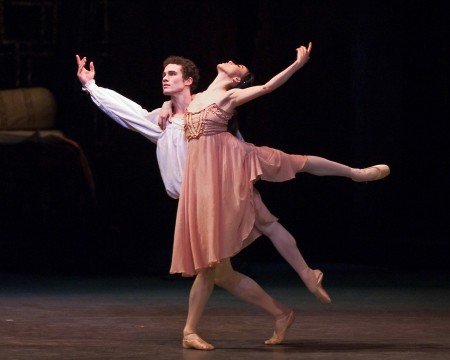 I loved the outdoor aspect of this performance, despite the awfully warm temperature. Having thesound of insects, and the sight of a few, contributed to the atmosphere, but most striking of all was the moon, the real one, which one could glimpse just to the side and slightly above the top of the stage. When Juliet stood on her balcony bathed in moonlight (lighting by Thomas Skelton), she managed to get some light from the actual moon as well!

MacMillan’s choreography isn’t recklessly passionate, except at a few key points. That doesn’t mean his choreography is boring, just that MacMillan saves a lot the “good stuff” for important moments. This works to give incredibly dramatic oomph to both the end of Act I, when Romeo (Cory Stearns) and Juliet (Hee Seo) meet beneath her balcony, and Act II, when Lady Capulet (Stella Abrera) mourns the death of her nephew Tybalt (Thomas Forster). The balcony pas de deux reaches impressive heights, quite literally. Stearns lifted Seo straight up well above his head, like the liftoff of a rocket, or the launch of fireworks. MacMillan’s ballet truly comes alive here, and the emotional impact is genuine. One’s heart swells and breaks at the same time, for the audience knows the future couple dreams they will happily share together is not to be.

Perhaps most moving for me, though, was Abrera’s gorgeously portrayed grief.  Her fists pounded. She desperately swept her upper body over the lifeless Forster, her arms outstretched, sort of like Martha Graham might do, draping him in her sadness. This break from traditional ballet form brings home the tragic sinking feeling that accompanies the knowledge that someone dear has passed away. 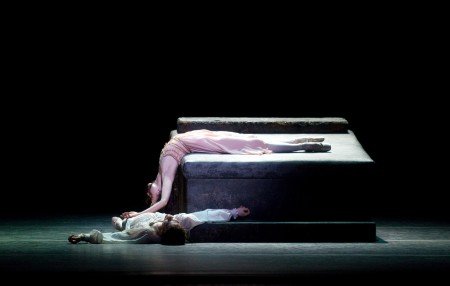 In the lead roles, waifish Seo is a sweet and mostly convincing Juliet. She plays the part of an innocent girl on the cusp of womanhood well.  Her performance was good, but not transportive. Stearns as Romeo was also solid, but he, too, didn’t consistently deliver magnificence. Although the pair fit nicely together as partners, with similar energy levels, I wished the romance between them had been turned up a notch or two throughout. In the balcony scene, understandably, the passion was more apparent, but it fizzled for me at the ballet went along.

Bestowing the ballet with welcome humor were the Devon Teuscher, Christine Shevchenko, and Alexandra Basmagy as Three Harlots. Teuscher’s naughty antics brought smiles to an otherwise difficult evening, as on the way to the performance I learned about the real life tragedy of over 80 people, including children, being purposefully run over by a terrorist driving a truck in Nice, France. Craig Salstein’s Mercutio, from my point of view, was a little less successful and too clownish. Casting the tall Blaine Hoven as the sidekick Benvolio was an interesting choice.  These two pals of Romeo seemed even more clownish given their significant height difference. 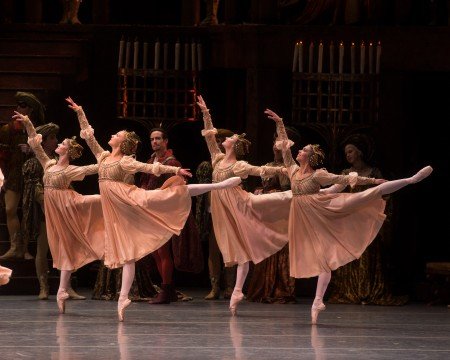 Much credit must be given to Ormsby Wilkins, ABT’s Music Director and conductor of the Wolf Trap Orchestra, who did a phenomenal job with Sergei Prokofiev’s score. The music is a big player in the ballet, and Wilkins was clearly enjoying his role.  His emphatic hands and head sometimes competed for my attention during the performance.

My disappointment with MacMillan’s Romeo and Juliet is the ending. In most versions, as in the Shakespeare play, the families reconcile. They see the error of their ways and pledge to end the feud. Lately, with so much violence around the globe, I really needed this ending. I wanted to see enemies vow to close their wounds with love. Instead, I got only the sight of the dead young lovers as the curtain closed. I’d have preferred some hope and peace!