American Ballet Theatre returned to the Metropolitan Opera House on May 13, the beginning of its 2019 Met Season. On the surface, the pieces selected for its opening three weeks didn’t appear particularly attention-grabbing, but these programs – at least the repertory evenings – proved noteworthy: effectively, they were tributes to two of the world’s most prominent, and influential, choreographers: Alexei Ratmansky and Twyla Tharp. 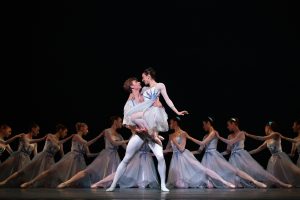 Ratmansky this year is celebrating his 10th Anniversary as ABT’s Artist in Residence, and the Company scheduled three programs of his dances (Harlequinade, a “Ratmansky Trilogy,” and Whipped Cream) to begin its 2019 Met season, and one (The Sleeping Beauty) to close it. The other program, a “Tharp Trilogy,” concluded these opening weeks. Since all but one of the Ratmansky pieces were previously reviewed, my initial focus here will be on Tharp.

To say that Twyla Tharp changed the face of ballet and contemporary dance is not debatable. To say that she accomplished this without destroying or diminishing the significance of either is also undeniable, and may be even more important.

Tharp traveled a circuitous route to get to the point in her career where her name is a household word in those households with the slightest knowledge of or interest in dance, and nearly as likely in households where dance isn’t in the vocabulary. Educated in multiple forms of dance, including ballet, she started choreographing minimalist modern (as her recent program, “Minimalism and Me,” at the Joyce Theater revealed), but quickly recognized that minimalist movement doesn’t bring enthusiastic paying audiences. So, whether for that reason or simply because she preferred dances with more visual meat on them, she began modifying her choreography, and eventually reached broader and enthusiastic audiences with highly regarded dances created for her own company.

Although her choreography at this point was known to dance cognoscenti, it wasn’t until her choreographic “collaboration’ with ballet that her reputation grew exponentially – first with three dances for The Joffrey Ballet (NY), the first, in 1973, being Deuce Coupe. That reputation subsequently skyrocketed with ABT. At the opening night of Push Comes to Shove in January, 1976, the usually stolid ABT audience appeared stupefied, and uncomfortable. I know; I was there. By its end, they were cheering. And ballet and Tharp never looked back. 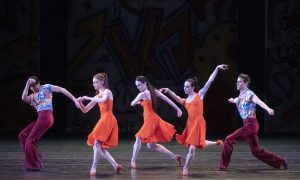 The return of Deuce Coupe, the second of three dances in ABT’s Tharp Trilogy Program (and a company premiere), requires some elaboration. At the time it was created, at least to many in the dance world, ballet and modern dance were two branches of the same dance tree that rarely if ever came in contact with each other – and advocates for either limb didn’t think much of the other. One was disciplined, the other wasn’t. One was rigid, the other wasn’t. Etc.

With Deuce Coupe, considered the first “cross-over” ballet, that distinction began to change. Literally. Deuce Coupe combines ballet and the contemporary dance language that Tharp had honed for her own company, but that’s not the only significance of it; it’s how she did it, and her clearly communicated observation that these forms of movement have more in common than differences.

It doesn’t start out that way. To an extensive sampling of songs by The Beach Boys (most of which were wisely utilized in incomplete form, which enables the ballet to move from one segment to another without losing either dance continuity or the essential sense of those transition times), the piece begins with one ballet dancer (Katherine Williams) in pure white full ballerina array, executing a series of combinations. [The gimmick is that she’s doing them in alphabetical order, from the first through the fourteenth segments (leaving two out, which because of the way it’s staged, does not come across as a gap)  of the nineteen segment dance.] Shortly thereafter (and before the music cuts in), two dancers (Stella Abrera and Calvin Royal III) join her, costumed in casual, at times muddy looking colors. Just as the costumes are radically different, the movement quality is as well, with Abrera and Royal moving in contemporary, Tharpian manner allegedly (according to the program note) “loosely based on contemporary social dances.” [I find her styles (it’s not possible to pin it down to one composite style), whether based on contemporary social dances or not, very difficult to describe – think concurrently slinky, quirky, angular, and disciplined, served with wit, intelligence, and creativity, all finished with a pinch of pizazz.] They occupy different parts of the stage, and don’t mingle. Two different worlds. 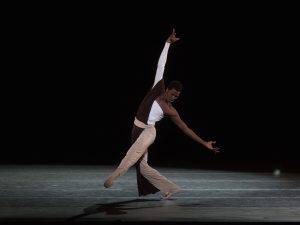 Slowly, almost imperceptively, the physical distance between the Williams camp and the camp of everyone else on stage (the number of dancers in each group, with or without Williams, varies from segment to segment) begins to overlap, although their very different styles are maintained. However, by the time the piece ends with the entire cast moving to “Cuddle Up,” the difference between Williams’s movement and those of everyone else isn’t so great: Williams seems to be doing what they’re doing, though she isn’t, and everyone else in in sync with what Williams is doing, sort of. They’re related. 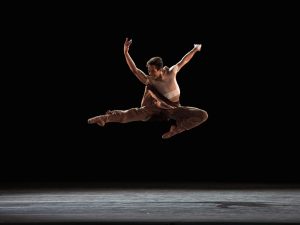 It’s somewhat of a miraculous transition, particularly since I suppose to most viewers it’s simply an unusual way to choreograph a dance to music by The Beach Boys. To me, Tharp’s poorly camouflaged point is that ballet and contemporary dance movement have more in common than one might think, and although they may be different branches of the same tree, the tree binds them both together. Other choreographers have observed the differences between one era of dance and another, or between a generalized contemporary movement and ballet, but none to my knowledge, at least as of 1973, had emphasized their commonality.

Williams, clearly intended to be more visible than any other single dancer, pulled off being the focus of attention, executing with intentionally stoic perfection. She wasn’t isolated; she was commanding. The other twenty members of the cast (by my rough count), did stellar work as well. 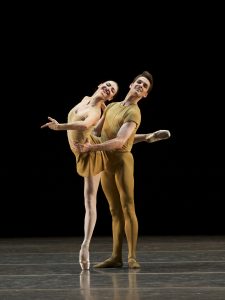 The Beach Boys songs seem somewhat dated now, as, in a way, does the dance. But it’s still a wonderful piece of work. Not at all dated is Tharp’s The Brahms-Haydn Variations, which opened the program.

Created in 2000, The Brahms-Haydn Variations is a different type of work, but one that’s equally brilliant. To Variations on a Theme by Haydn for Orchestra, Op. 56a by Johannes Brahms,Tharp here has choreographed a classical-looking, purely abstract piece for five couples (who aren’t always paired together): Misty Copeland, Luciana Paris, Hee Seo, Christine Shevchenko, Sarah Lane, Joo Won Ahn, Gabe Stone Shayer, Blaine Hoven, Joseph Gorak, and Gary Pogossian; two featured couples: Rachel Richardson, Betsy McBride, Jose Sebastian, and Duncan Lyle), and an 8/8 corps, all of whom gave the piece the majesty, power, and yet sensitivity it deserves. In Santo Loquasto’s costumes, and with Jennifer Tipton’s lighting, the stage looked bathed in gold.

Not surprisingly given its title, the ballet is a series of variations on a theme – but it’s not as dry as that simplistic description implies, and once it gets moving it proceeds in brief visual explosions until its powerful conclusion. I thought that Paris and Shayer did the most consistently excellent work, although at one point Seo and Hoven melted into each other with spectacular sensitivity. And Bogossian, whom I don’t recall previously seeing, and Rachel Richardson, whom I definitely do, were other standouts.

The evening concluded with Tharp’s masterpiece (one of them), In the Upper Room. I’ve reviewed this dance several times previously, so there’s no need here to discuss it in detail. 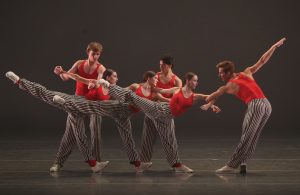 I attended this performance to see what, in large part, was a brand new cast, led by Stephanie Williams, Wanyue Qiao, and Catherine Hurlin as the “pajama” girls (with Williams and Qiao as the lead pair), and Breanne Granlund and Zimmi Coker as the two “red toe-shoe girls.” They all danced with thrilling exuberance, as well as that appearance of wonder that sometimes comes with first efforts. And when Tharp appeared for the curtain calls, the cast, and the audience, erupted in unmistakable joy.

I’ve reviewed Ratmansky’s Harlequinade and Whipped Cream previously at length, and they require no further elaboration here. The world premiere this season, his The Seasons, premiered at the ABT Gala program on May 20, and then joined his Songs of Bukovina and On the Dnieper in a “Ratmansky Trilogy” program that followed the Gala. I loved Songs of Bukovina and On the Dnieper when they were first presented, and I hope ABT brings them back for its Fall, 2019 Season so I have another opportunity to see them.

ABT’s Gala Program was dedicated to Ratmansky. For the occasion, in addition to a film clip featuring Ratmansky in rehearsal, the evening included the only showing of his Serenade after Plato’s Symposium this Met season, and the world premiere. 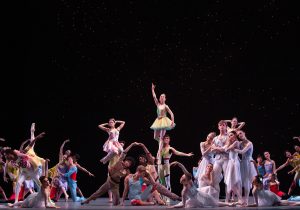 The Seasons isn’t the best of Ratmansky’s ballets. But it doesn’t pretend to be more than it is: as Ratmansky stated, it’s a celebration – of his 10th Anniversary as the company’s Artist in Residence, and of ABT and its dancers. On that level, it’s both spot on and great fun. And if you add Ratmansky’s endlessly clever choreography, it’s often better than that.

The Seasons isn’t a rehash of Jerome Robbins’s The Four Seasons. For one, it’s not comic; for another, it’s not Vivaldi – it’s Glazunov. And it’s not linear. Well, it is, sort of, but the seasons overlap, and frequently return to steal time from the subsequent season – as happens in the real world. Also as happens in the real world, Spring and Fall are the shortest segments, and seem to appear and disappear much too quickly. 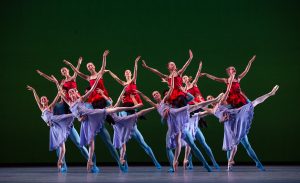 The ballet’s highlights were spread throughout the piece. They included all of “Winter,” particularly Katherine Williams’s “Frost” (that’s the character’s name), and Hurlin’s sensational “Hail”; Cassandra Trenary and Calvin Royal III’s exuberant Autumn (as “Bacchante” and “Bacchus” respectively); and a delightful dance for Summer’s “Cornflowers,” “Water Men” (both consisting of members of the corps), and “Poppies” (talented students from ABT’s Jacqueline Kennedy Onassis School). The audience was thrilled with James Whiteside’s (Spring’s “Zephyr”) bicycle lift of Isabella Boylston (Summer’s “Spirit of the Corn”}. And most special was when Spring dancers Sarah Lane and Skylar Brandt returned in Summer, and Ratmansky inserted a cheeky little sequence for Lane and the Water Men in which they each took turns promenading Lane while she was en pointe in arabesque. Lane’s character was “The Rose.” It was, in a way, the blossoming of the Rose petal by petal. But it was also a wonderfully clever nod to The Rose Adagio. 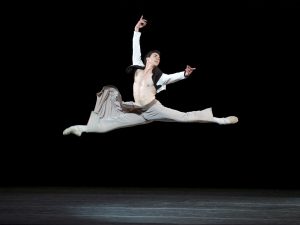 Earlier, Ratmansky’s Serenade after Plato’s Symposium was given a superb, powerhouse performances. In my first few observations, I took the piece’s connection with Plato’s Symposium literally, and thought that male solos lacked focus (they were great dances, but their meaning eluded me), and that the addition of a ballerina as the sine qua non of beauty and an ideal of love to which all the men in the piece reach out to at the dance’s conclusion was not compatible with Plato’s emphasis on platonic love. But if you forget Plato and focus on Ratmansky’s craft, the flawless execution by the seven male dancers (Devon Teuscher was the “ideal”), it’s one of his best pieces. Tyler Maloney, Thomas Forster, Joseph Gorak, Alexandre Hamoudi, and particularly Royal, Shayer, and Daniil Simkin, gave superb portrayals.

It would have been admirable if ABT had returned his Shostakovich Trilogy to its repertory this season to further honor Ratmansky – and perhaps to make a statement. But, like the return of Tharp’s Push Comes to Shove, which is long overdue and would have been an appropriate addition to the Tharp Celebration, that will have to wait for another season.