Wednesday night’s American Ballet Theatre program featured a Benjamin Millepied trifecta: three ballets, including two world premieres, one of which was unscheduled. However, with the exceptions of the latter and the return of Alexei Ratmansky’s Souvenir d’un lieu cher, it was a losing card. 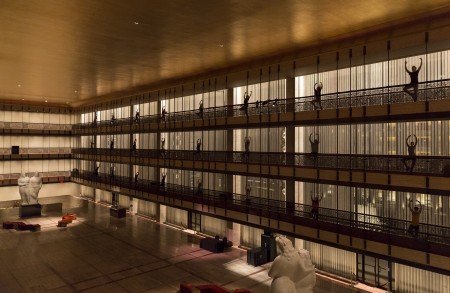 ABT Apprentices, ABT Studio Company
and students of the ABT Jacqueline Kennedy Onassis School
in Benjamin Millepied’s “Counterpoint for Philip Johnson”
Photo by Erin Baiano

I Feel The Earth Move, the scheduled premiere, has nothing whatsoever to do with the song by Carole King. With that title, that was what I’d anticipated – and it was the dance’s initial disappointment. But this was minor. Much more serious was the disappointment provided by the piece itself. It’s Millepied at his most serious, most desperate, and most hopeless.

The ballet’s lack of success has nothing to do with the execution by the eighteen dancer cast. On the contrary, from the principals (David Hallberg, Misty Copeland, Devon Teuscher, Hee Seo, Cory Stearns, and particularly Herman Cornejo, who lit up the stage) to the twelve members of the corps, the dancers provide what may be the only reason for seeing it. But it’s the contrived self-centered solemnity of the piece itself, as well as its obtuseness, that does it in.

Millepied has taken three disparate pieces of music and attempted to create a ballet out of it. There’s nothing necessarily wrong with that. But the apparent point of the piece, to the extent there is one, is a purposeless depiction of alienation, darkness, gloom and doom, abetted by a score that doesn’t jell as a coherent whole even though its components are all by the same composer.

The piece is even more disappointing because, although Millepied isn’t explicit about it, it appears that I Feel the Earth Move is in some way intended to be about the AIDS crisis, and the artistic/popular response to it. The sole program note is a quotation from Tony Kushner’s Angels in America. This would certainly provide a rationale for Hallberg’s distorted, panic-stricken, hopeless movement quality in the dance’s First Movement, and Copeland’s response to him can be seen as sympathetic and caring. But the choreography and atmosphere could apply to the AIDS crisis, Kushner’s play, or something else entirely – it’s that unfocused. [The First Movement brings to mind, and suffers mightily by comparison with, Chamber Symphony, a component of Ratmansky’s Shostakovich Trilogy.] And if the rest of the dance is in some way connected to this First Movement, it’s such a distant abstraction that any such connection doesn’t register visually. The earth isn’t just moving; it’s coming apart, and results in an emotional apocalypse with no end but death, sometimes prettified; but most of the time not.

The piece is apparently intended to give the impression of being “real,” as opposed to being a staged dance. The program’s previous dance ends without the house curtain coming down, so the transition to I Feel The Earth Move is visible to the audience. Indeed even after the ballet “officially: begins, the house lights, although dimmed, remain up. This isn’t ballet theater, folks, Millepied appears to be saying, it’s the real world.

After the stage is set (mostly apparent lighting adjustments), the ballet’s corps ceremoniously crosses the stage for no reason other than to formally start the ballet, as if their presence is the equivalent of the curtain rising. Hallberg is immediately seen in choreographed agony, obviously disturbed about something: he writhes, contorts, twists, as if trying to scratch a painful itch he can’t reach or perform some solo exorcism – but without any explanation, impetus, or consequence, and with choreography that’s more manic than purposeful. He’s soon joined by Copeland, who throws herself at him as if happy she’s ‘found-him-at-last’, or just willing to share in his misery, and the two dance together, mostly parallel and mostly in sync, for most of the balance of the First Movement (subtitled “Tremor,” to “Act III, Scene 1: Trial/Prison” of Philip Glass’s Einstein on the Beach). Ok, so maybe this is the earth’s tremor; the calm before the … bigger tremor or cataclysm – except this bigger tremor or cataclysm is not part of the dance.

The ballet’s Second Movement (subtitled “A Vision,” to Liquid Days, Part I by Glass and David Byrne) begins auspiciously, with the corps women lining up horizontally downstage, mostly seated on the stage floor, one leg bent up at the knee, and propped up by an arm. With the dramatic lighting by Brad Fields, it’s a striking ballerina panorama (and perhaps that’s the reason that rehearsal photos of this alignment have been widely released in advance). But after some nifty variable sequencing, the tableau, which seemed portentous of something, evolves into geometric lines and circles with no apparent significance. Worse, the segment appears to have nothing at all to do with the First Movement – except maybe as a disjointed “other place” (angels in some heavenly space?). 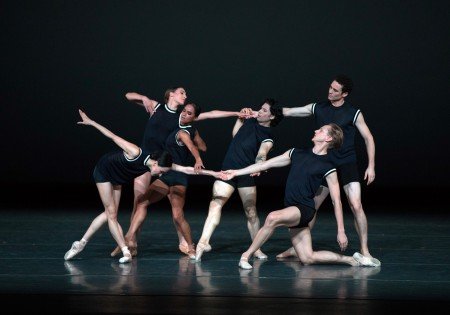 In the final Third Movement, subtitled “The Work Begins,” with costumes changed to black with white trim for everyone, and to Glass’s Changing Opinions, the featured dancers execute pained, manic duets or solos, and the ballet suddenly ends, in an abrupt flash – consistent, maybe, with the notion of life ending in a flash, though it’s not clear to me that this was the point Millepied was tying to convey.   The Glass music sounds like (and may be) the same music that Twyla Tharp used for In The Upper Room, which is another unfortunate but inevitable comparison that the audience may make.

Even if I’m right about the ballet’s raison d’etre being related to the AIDS crisis, which might otherwise be a commendable if not unique theme, the dance is so pretentious, uninventive, and dense that it hardly matters. And to the extent it’s supposed to be a choreographed adaptation of Kushner’s work (and I’m not saying that this was Millepied’s intent, because that intent is so unclear), with Angels in America, even if some thought it convoluted, at least it was clear what that theatrical piece was about.

I Feel the Earth Move was followed, at least on the official program, by a repeat of Millepied’s Daphnis and Chloe, which premiered with the Paris Opera Ballet in 2014, and with ABT a year ago. In this performance, Stella Abrera and Cory Stearns assumed the lead roles danced by Isabella Boylston and Marcelo Gomes a year ago, but although Abrera’s execution was considerably more polished, the end result was no different.

Unlike I Feel the Earth Move, I got what Millepied was trying to do here: to distill the story to its essence a la Balanchine (although the narrative remains), and to use stripped down staging and choreography to the same purpose. And even though I also got, I think, what the omnipresent geometric signs mean (they’re abstract representations of the Greek gods who populate the original myth and direct its outcome), none of this helps, because Millepied has kept the full Ravel composition rather than eliminating excess parts to fit the stripped down, “modern,” display. This was a mistake, because the result is a ballet filled with bloat (duplicative and unnecessary choreographed scenes to cover the expansive score) that the distillation accentuates. 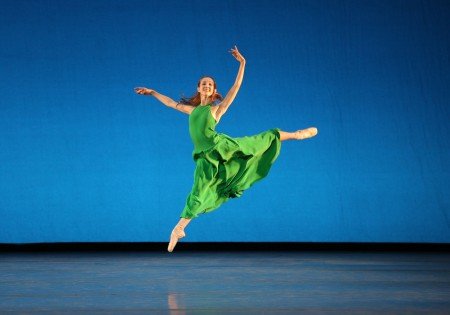 Like last year, however, the piece’s saving grace is the sudden, ennui-shattering solo appearance of Rachel Richardson. The knockout green costume she wears to inaugurate the wedding celebration is only part of what awakens the audience – it’s also Richardson’s joyous persona. The rest of the nymphs follow, having changed from nymphy white costumes to equally ethereal-looking multi-colored dresses in green, yellow, and blue for the occasion.

As Lycenion, Cassandra Trenary was a gorgeously seductive conniver without a cause, and as Dorcon, Calvin Royal III was her sinister partner in crime. Cornejo, as the pirate who kidnaps and assaults Chloe behind the curtain of his cohorts in black until he’s interrupted by the appearance of the several deus ex geometrica and rescued by Daphnis, is as vibrant here as he was as a pirate in Le Corsaire. Richardson and Stephanie Williams were the two “most equal among equals” nymphs.

In between these two ballets was the unannounced world premiere, titled Counterpoint for Philip Johnson (Johnson was the architect of the New York State Theater – now the DHK Theater – building), which took place above the theater’s Promenade during intermission and featured new ABT apprentices, members of ABT Studio Company, and students from the upper classes of the JKO School – the same pool from which the dancers in the opening night piece d’occasion, Jessica Lang’s The Gift, had been selected. It’s fun, utilizes the Promenade catwalks to advantage if not particularly cleverly, and provides the audience with a pleasant palate cleanser in between the Millepied stage pieces. 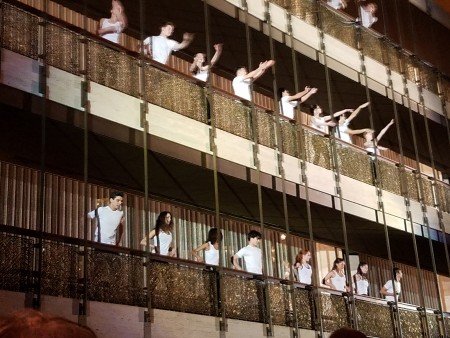 ABT Apprentices, ABT Studio Company
and students of the ABT Jacqueline Kennedy Onassis School
in Benjamin Millepied’s “Counterpoint for Philip Johnson,”
in performance
Photo by Jerry Hochman

Essentially, the young dancers march to the long side of the Promenade, lines entering from the second and fourth rings on the left, and from the third ring on the right, and proceed to do balletic exercises, individually, collectively, in sync, or sequentially as the music (by Steve Reich) progresses. There’s nothing meaningful here beyond seeing these future ABT dancers, which is meaningful enough. And to my knowledge this is the first use of these walkways as a performance space, and the idea has considerable merit. 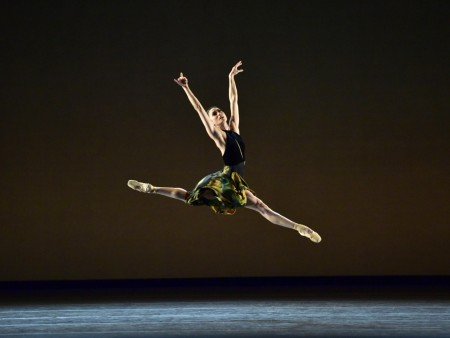 The evening opened with the first of this season’s viewings of Souvenir d’un lieu cher, Ratmansky’s hit from the Spring 2017 Met season, with the same cast as performed earlier this fall at a Fall For Dance program: Stella Abrera and Sarah Lane from the original cast, and Thomas Forster and Tyler Maloney replacing original cast members Marcelo Gomes and Alban Lendorf. This ballet looks best on the DHK Theater stage (it appears to be smaller than the Met, and larger than City Center), and the narrower field of focus enabled me to see that the Gomes/Forster character isn’t the only one looking back wistfully on what was, as I previously observed – Abrera’s character also watches as Lane and her partner dance, but from the opposite side of the stage. The performance was strong, except that Maloney, for whatever reason, failed to whirl Lane offstage at the culmination of their romantic duet (perhaps he felt he didn’t have a firm enough grip), which is unfortunate, because that image sequence is a highlight of the ballet.

With the inclusion of Millepied’s “intermezzo” piece, and as I’ve observed previously, ABT is once again signaling a renewed, and welcome, focus on its future, and on growth from within. But as I also mentioned in my most recent review, this only works if ABT, for its signature Met seasons, spreads the wealth around by providing significant opportunities for its leading dancers and most promising soloists to gain performing opportunities and to grow in roles. The content of, and casting for, ABT’s 2018 Met Season is now out, and although there are some noteworthy exceptions, it’s disappointing, particularly in its uninventive casting for Swan Lake and Romeo and Juliet, and by inviting a guest artist to syphon ticket sales in a ballet, Giselle, for which ABT already has a surfeit of experienced principals or eligible soloists deserving of the opportunities. And when performing opportunities in leading roles are limited, there’s no justification for giving two performances in lead roles to the same ballerinas and none to others. Two steps forward; one step back. In the end, I suppose, it’s still progress.