On July 13, 2019, I caught the third and final performance of Swan Lake by American Ballet Theatre (“ABT”) at Wolf Trap National Park for the Performing Arts, located in Vienna, Virginia, not far from the nation’s capital. Wolf Trap is a wonderful place to visit, and I made the most of the experience by picnicking on the lawn before the performance, along with many others. If you’re not familiar with the weather in July near Washington, DC, then I should let you know — it’s almost always hot and humid, sometimes almost unbearably so. ABT’s Swan Lake delivered a fresh performance that distracted me from the uncomfortable temperature outside.

The performance was held in Wolf Trap’s Filene Center, a sprawling outdoor amphitheater, which is not a typical venue for ballet. Some seating is covered, but the considerably less expensive lawn seats have nothing above them but the sky. Wherever you’re seated, you’re in the midst of the elements. When the sun goes down, the temperature does as well, and then the insects come out in full force. During the performance, a huge moth dove perilously close to several heads in the audience. In addition to the hum of cicadas, one could hear the rustle of fans as people flapped programs to cool themselves.

The air was so soupy, I felt like I could have been sitting in a lake! I can’t imagine what the heat must have felt like on stage, with lighting, makeup, and costumes contributing even more warmth. Yet I didn’t notice any ill effects on the dancers, who gave a delightful and poignant performance. Saturday night’s cast made Swan Lake truly come alive for me. 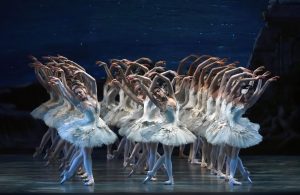 This production of Swan Lake, choreographed by ABT’s Artistic Director Kevin McKenzie, is somewhat abbreviated and perhaps, to some, a tad confusing (two male dancers take on the role of von Rothbart, the evil sorcerer). For me, however, it proceeds quite seamlessly. Swan Lake is a ballet that I find wearying at times, so I appreciate this production for its sleek storytelling. With Devon Teuscher at the helm, the ballet had even more impact than usual. Teuscher deftly embodied the narrative in her movement and imbued the performance with tender emotion.  Without a doubt, Teuscher was the highlight of the closing performance, and quite possibly the highlight of the entire run, although I didn’t attend the previous two nights with Hee Seo and Misty Copeland as the leads.

When discussing Swan Lake, there’s always a debate about Odette (the White Swan) and Odile (the Black Swan). People inevitably want to know which one was performed better. Often, it’s hard to choose. In fact, in my opinion, when the dual role of Odette-Odile is performed well, you don’t need to take sides, you love both portrayals. In this performance by Teuscher, I give a slight nod to her Odette, although I could be persuaded to change my mind. 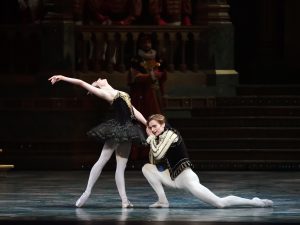 As Princess Odette, Teuscher was strong but also soft, and, at least initially, appropriately timid. She really shone in her ability to convey the interior of Odette’s heart through the tilt of her head, the melting of her arms. She also admirably took her time, slowing to build tension, projecting impressive majesty. As Odile, she came across as a different personality. Rather than showing endearing shyness, she flashed a seductively confident smile. Here, Teuscher seemed less the embodiment of evil than fantasy. She didn’t look vengeful, nor did she dance with pronounced vigor. Instead, Teuscher’s Odile retained plenty of Odette’s familiar sweetness, making it easy to understand why Prince Siegfried (Aran Bell) becomes so entranced by her. She is the swan of his dreams, only more self-assured.

Bell did an apt job as the adoring prince. It’s sort of natural that Teuscher eclipsed him. His Siegfried was bumbling around actual women and awestruck around swans. Even if his character wasn’t particularly socially skilled with the court ladies, Bell proved to be a sound partner, and importantly, one who won the audience’s sympathy. Both Bell and Teuscher are relatively new to these roles, and their chemistry could use a little amping up, but I think this will happen over time. Overall, they make a captivating couple, and their relative youth suits the tragic young lovers they depict.

Teuscher exudes artistic maturity beyond her years, while Bell has a bit more room to grow. Amazingly, at age 20, he’s just out of his teens. I remember first seeing him in the dance documentary First Position, which was released in 2012. It’s clear now, as it was then, that his talent will continue to blossom. Interestingly, I also first noticed Teuscher in a film. She was part of “15 Days of Dance: The Making of Ghost Light,” excerpts of which screened at the National Gallery of Art in 2010. The film showed the development of Ghost Light, a work choreographed by Brian Reeder for ABT’s Studio Company that premiered in 2007, and Teuscher made an impression on me even then, more than a decade ago. 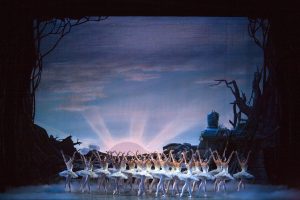 Other noteworthy performances included the Pas De Trois from Act I with Stephanie Williams, Katherine Williams, and Calvin Royal III. Royal is a favorite of mine. He’s absolutely magnetic. And Katherine Williams danced with some extra sparkle. As the Two Swans in Act II, Paulina Waski and Catherine Hurlin were a pleasure to watch. Waski substituted for Katherine Williams, who in turn had substituted in the Pas De Trois for Melanie Hamrick. Hurlin can be beguiling, but for some reason in this performance it was Waski who held my attention longer. Together they made an intriguing pair. I would love to see Waski dance again.

Additionally, in Act III, I especially enjoyed Joo Won Ahn and Sung Woo Han, two dancers from South Korea, who lit up the stage in the Neapolitan dance. Ahn and Bell, it was recently announced, will be promoted to soloist effective September 1, 2019. Based on their performances in Swan Lake, I can see why. As well, the quartet in the Spanish Dance (Isadora Loyola and Alexei Agoudine, plus Luciana Paris and Carlos Gonzalez) showed extra sass. Finally, the petite Léa Fleytoux, an apprentice who has been promoted to the corps, captured my gaze. I hope she will quickly rise through the ranks.

In sum, it was a fantastic evening. ABT’s Swan Lake sent me home soaring. I’m excited to see what this company, with its incredible wealth of talent, produces next season.