Ah, whipped cream. It’s sweet, light, and rather insubstantial, but it can be a perfect dessert adornment. Alexei Ratmanksy’s evening length story ballet, Whipped Cream, amounts to basically what one would expect from the title — something fluffy and fresh, flimsy and fanciful, and absolutely sugary. Although the original ballet debuted at the Vienna State Opera in 1924, Ratmansky’s choreography, which premiered in March 2017, is surely a different take. I was lucky to see all of the dancers in the lead roles they debuted: Daniil Simkin (The Boy), Stella Abrera (Princess Tea Flower), David Hallberg (Prince Coffee), and Sarah Lane (Princess Praline).

Mark Ryden’s set and costume design is a wonderland dominated by candy-coated pink and cute, cuddly, cartoonish creatures. There’s also a scary hospital. And a doctor with a giant head. It’s a bit much, and it’s a ton of fun. No detail was omitted. In fact, everywhere you look there’s a new eye-catching design element to discover. Words cannot do the childhood fantasy Ryden conjures justice. More than the choreography, it’s the splendid costumes and set that are the most memorable thing about Whipped Cream. At times, the costumes and set distract from the dancing, though, and pose hazards. Bold stripes are dizzying and make moments when the dancers are not in unison more apparent. And the thin white capes on the backs of the corps playing the part of peaks of whipped cream can get stuck over one’s face, as I observed. 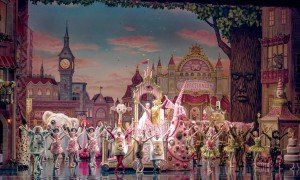 ABT in Alexei Ratmansky’s Whipped Cream, photo by Gene Schiavone

For me, Act I was a little slow and less entertaining than Act II. Yet there was plenty of magic to enjoy. The dancers playing children did so convincingly, and I cannot imagine a better person to be The Boy than Simkin, who was super bouncy and adorably expressive as he hopped about. Also of note was a mistake that was handled with fitting nonchalance. A confection that was a prop toppled from a table onto the stage, where it sat for a while, until one of the “children” had the chance to sweep it into his arms. He might have stopped there, but he eagerly showed it to his pals and trotted off with it like the fallen cake had been planned all along.

If I haven’t given it away already, desserts come to life in Whipped Cream. Coffee, tea, sugar,  and cocoa, after emerging from their respective tins, woo each other. Marzipan, sugarplums, and gingerbread men fight. It’s like The Nutcracker in many ways, including battles, a little romance, and transportation to a happy kingdom in the end. I might prefer watching Whipped Cream. I guess I’m a non-traditionalist. Whipped Cream is far shorter, livelier, and funnier than The Nutcracker. 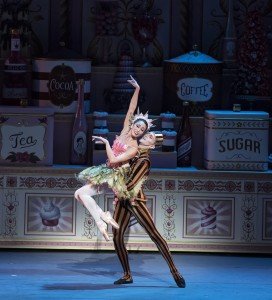 After Act I’s visit to the world of whipped cream, where dancers in all white fly down a slide and whip around in circles, Act II takes a dark turn, but humor still abounds. Nurses in white pointe shoes with red crosses on their caps and chests waltz around with huge syringes. They’re the stuff of nightmares, but they’re beautiful, too. There’s even a bed pan that The Boy kicks with his toe so it slides under his hospital bed.

Other than Simkin, my favorites in Whipped Cream were Catherine Hurlin as Mademoiselle Marianne Chartreuse, Duncan Lyle as Ladislav Slivovitz, and Roman Zhurbin as Boris Wutki. Why do these characters have silly names? I don’t know. Much of the ballet is silly. Hurlin was bubbly and effervescent, and her companions were hilarious. Their antics sort of stole the show. But Stella Abrera gave them a challenge, as her heavily flirty Princess Tea Flower was also amusing to watch. And Sarah Lane as Princess Praline was every bit as charming as a princess in a land of sweets should be. Whipped Cream, like The Nutcracker, uses a few real children, and they were totally darling, their costumes bobbing up and down. 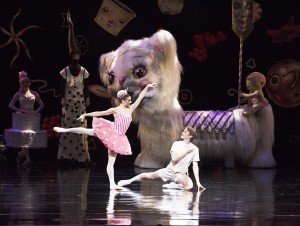 Although it doesn’t offer a lot in terms of dancing that makes your heart sing, Whipped Cream does offer welcome lightness and frivolity. Ratmansky clearly knows Whipped Cream is a little ridiculous. Wisely, he embraces this. The choreography isn’t afraid to explore parody, and it expands upon childish whimsy. The dancers all looked like they were having a great time. I don’t want to spoil all of the surprises, but there are many moments in Whipped Cream that make one laugh or smile, and Washington, DC right now needs more of that!

I think Whipped Cream would make a great substitute for The Nutcracker at holiday time. My only slight hesitation involves whether the scenes with alcohol are appropriate for little ones. Well, I don’t have little ones to worry about, and if I took some with me to see the ballet, I’d be glad that the liquor part is there. It’s a romp for adults. Anyway, Whipped Cream earns this critic’s recommendation. It’s delectable!