American Ballet Theatre’s Swan Lake was new to me this year, in part, because I saw it through the eyes of a friend who had never seen any production of Swan Lake before. This version was choreographed by Kevin McKenzie after Marius Petipa and Lev Ivanov. My friend reacted in ways that I expected, and also in some unexpected ways. The stunning beauty of the sizeable corps, all in white, of course did not elude her, or anyone else in the audience, whether or not they were Swan Lake veterans. The uniformity of the swans, both fierce and delicate, is a strong point of this classical ballet. All those swans still make me swoon. Appreciative gasps emerged from the audience as the dancers stretched their arms like the necks of swans, their hands twisted into beaks above their heads. People watched in awe as the swans slowly glided across the stage. Those swans were literally breathtaking.

My friend also took note of the Thomas Kinkade-like set, which didn’t hold much appeal. The sickly pastels, simple slapdash trees, storybook castles glowing with light, and the sun in Act IV with rays spread out like a child’s drawing, turned her stomach as they do mine.  She and I also agreed about Joseph Gorak making a positive impression as the Prince’s friend Benno. What a charming smile he has. And we both absolutely adored Joo Wan Ahn and Sung Woo Han in Act III’s Neapolitan. This well-matched pair truly shined and contributed a “go for broke” element that succeeded in raising our spirits. We disagreed, however, about the performance of Hee Seo as Odette-Odile. As the black swan, I thought Seo really came to life. In my view, she had an exciting glimmer of ruthlessness and danger. But my friend found Seo’s Odile dull.

In addition, I felt that Thomas Forster as Von Rothbart in Act III was a sexy villain, making the most of his dark role. He shot arrows with his glances and became a compelling jerk. I was spellbound by him. Furthermore, Jose Sebastian stood out to me in the Spanish Dance. Somehow his expression was incredibly bright, and he danced with boundless energy. 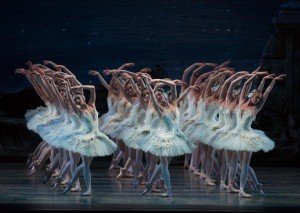 Overall, Seo was a serviceable lead. I have no major quibbles with her performance. She danced Odette-Odile rather straightforwardly. Seo is certainly lovely to behold. Her lines are impeccable. Even a flick of her head bestows mysterious emotion. I did, though, find myself wishing I was watching someone who departed further from such a traditional portrayal. Curiously, I also found myself longing for someone a little less safe and well-controlled. Taking chances can bring unique thrills, and although she did her job exceedingly well, Seo didn’t really thrill me. She was unruffled, and I wanted a ruffled bird!

Cory Stearns as Prince Siegfried was a similarly capable lead. I have nothing in particular to criticize about his performance, except for a sense that he was too composed. I admit, however, his sort of dopey role gives him less to work with. Even so, I was lulled and never once felt exhilarated by his dancing. When he jumped, almost comically, into the lake to join his beloved, my heart was sadly unmoved. Both Seo and Stearns excelled most in slower moments, when their more serious and introverted demeanors conjured more feeling. Their bodies can speak volumes when they use the opportunity to do so. 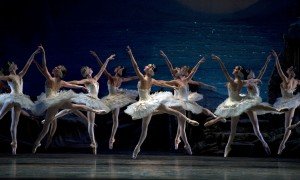 I think “subdued” describes the dancing overall. Unlike the sets, the dancers created pretty pictures. Everything was reasonably pleasant. The production was more on the level of gloss than gut. It was not without its flaws. I have no idea how it happened, but one of the swans appeared at the end of the ballet without the plastered wings on either side of her head, and because she often danced in the front row, she ruined the consistent look of the group.

While I didn’t enjoy the sets and costumes by Zack Brown, I did enjoy the lighting by Duane Schuler. In Act I, the mood changed as the lighting effectively went from afternoon to evening. The lakeside storm during which the swans furiously flap was a minor miracle. I enjoyed the music, too. Tchaikovsky’s music pushed the dancing and heightened the drama. The hair on top of conductor Charles Barker’s head leapt into view now and then, bobbing up as he enthusiastically led the passionate Kennedy Center Opera House Orchestra.