Who knew that in the midst of rebuilding, and of change in direction that appeared headed toward a contemporary ballet repertoire, American Repertory Ballet would pull off a minor – or perhaps major – miracle? Who knew that ARB would mount a highly credible production of that most Romantic of ballets, Giselle?

That it’s not on the same level as the national and international ballet companies with major funding and major seasoned talent (and major ticket prices) is not the issue. That ARB’s production can hold its own with these major productions, and in some ways exceed them, is far more significant. ARB’s Giselle, which premiered at its new home theater at the New Brunswick Performing Arts Center on, appropriately enough, Valentine’s Day, is for real. 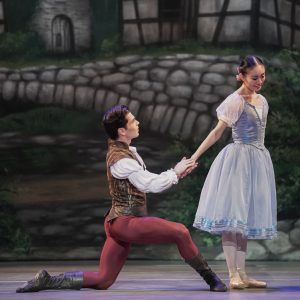 One knew from the moment that ARB’s opening night Giselle, Ryoko Tanaka, emerged from her front door that her characterization was going to be spot on. Not a step out of place or a nuance omitted, Tanaka’s Giselle sparkled in an appropriately understated way. And when she tossed off the iconic diagonal hops en pointe with the clarity and confidence of a far more experienced ballerina (this is only her second season with ARB, following ARB’s training program and a year in ARB2), one knew that her technique was going to be spot on also.

Indeed, it all worked. The quality of Act I was far beyond what anyone outside the company would have imagined possible. After initial stiffness, Tanaka’s Albrecht and Hilarion, respectively Aldeir Monteiro (who joined ABT four years ago following a stint at Miami City Ballet) and Journy Wilkes-Davis (a three year company veteran and a standout in last year’s Beauty and the Beast) delivered dynamic performances that gave their roles essential depth. 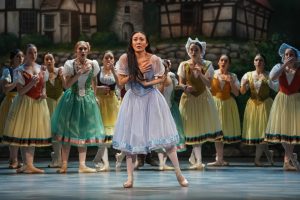 The supporting company members, some of whom I’ll mention below, executed both the technical and emotional components vibrantly. Indeed, unlike some major productions in which the Act I village seems artificially created, this village was alive and chockablock with people, but it avoided looking too busy. It all worked: from the initial village dances – far more buoyant, and filled with far more dancing by far more corps dancers than many such dances in more opulent productions – to the dances in and around the wine festival (ditto), through to Giselle’s mad scene.(very nicely done). And unlike many large-scale productions, between the choreography and performances, and the sets and costumes (designed respectively by Todd Dellinger and Christina Giannini), this village drew the audience in. While not exactly a chamber production, the theater’s less expansive area here was a benefit: to a large extent, the audience wasn’t just watching it; they were in it.

The well-prepared young dancers from ARB’s affiliated Princeton Ballet School contributed mightily to the village’s credibility: they weren’t just there to provide a ready paying audience (a side benefit of most such productions where a school’s young dancers are involved), they belonged – and there were more of them than usually seen in other productions. 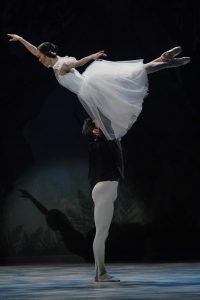 I anticipated that Act II would be far more difficult to do well, but it too, worked like a Swiss (or German) – or, as I’ll explain below, a Cuban – watch. Surprisingly (to me), Tanaka proved to be as credible a spirit as she was a village maiden, with strong technical ability (including authentic-looking rounded Romantic arms) and just enough subsurface emotion to be more than an empty vessel. Monteiro (whose entrechats during his solo were memorable – and equal in quality to any I’ve seen anywhere) and Wilkes-Davis poured out the melancholy and the drama, and Monteiro’s partnering was impeccable. And the 24-dancer corps of Willis executed superbly. [ARB’s program spells Willis with two “l’s,” rather than one. I’ll use their spelling here.] My only reservation was Annie Johnson’s Myrta, not so much by her dancing, which was highly competent (and in her entrance, the restoration of Myrta’s second stage spanning bourrees, which I first saw executed by Martine van Hamel but which has been omitted in American Ballet Theatre’s current production, was most welcome), but in her demeanor. Looking severe is a component of Myrta’s character, but Johnson had a pasted-on facial immobility that wasn’t inappropriate but which looked, well, pasted-on. But I think that was the way she was told to present her character, consistent with other general changes of stylistic emphasis. 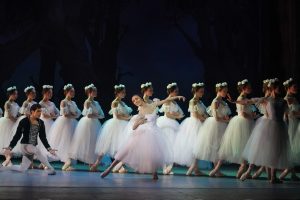 Which brings me to the overall style of ARB’s production. Aside from not believing that ARB could accomplish this at all, the production (after Jean Coralli and Jules Perrot) was staged by a committee, usually a sure harbinger of disaster. This “committee” consisted of Aydmara Cobrera, José Manuel Carreño, Ian Hussey, and Ana Navoa (listed alphabetically, as in the program). All except Hussey, ARB’s Ballet Master and former Pennsylvania Ballet principal dancer, have significant connections with Cuba in general and the Ballet Nacional de Cuba in particular. Cabrera, now Director of ARB’s affiliated Princeton Ballet School, is a former principal dancer with BNC. Carreño, a former principal dancer with American Ballet Theatre from 1995 until his retirement in 2011, was born in Cuba and trained at Cuba’s National Ballet School. Navoa, another former principal dancer with BNC who retired in 1997, was Carreño’s frequent partner. Each has performing experience with Giselle, and Carreño staged Giselle for Silicone Valley Ballet (formerly San Jose Ballet), where he then was Artistic Director, in 2015.

It’s not a huge intellectual leap to expect that the relatively minor stylistic differences I saw in this production from others are derived from BNC’s Giselle.

My understanding is that the version of Giselle staged by the late Alicia Alonso, who first danced the role with ABT in 1943 and premiered her version in Cuba with BNC’s predecessor in 1948, was not intended as a reimagining, but a change in emphasis (or, suggested differently, a return to the original production’s emphasis) that some say makes it look more dramatic. 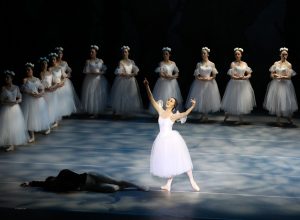 I saw BNC’s performance of Giselle during its visit to New York in 1978 (and also saw Alonso guest with ABT). To me, the differences in the BNC production can be seen in Act I’s greater vibrancy, but it’s more measurable in Act II, in which the dramatic sense is exaggerated, making it at times as much gothic looking as Romantic. [Coincidentally, the first time I’d seen those Act II entrechats done as Monteiro did them here (as opposed to the Baryshnikov brises down the line of Willis) was by the late Fernando Bujones, who was born in Miami of Cuban parents, and whose first formal ballet classes were with Alonso’s school.] While not insignificant, the differences don’t change the ballet’s structure at all, or, generally, its presentation.

This exaggerated melodramatic sense is evident particularly when the Willis introduce the dance – to – the – death sequences. In ARB’s production of these scenes, the Willis appear, initially, with their upper bodies almost parallel to the stage floor until they gradually assume erect positions. Obviously, this, as well as Myrta’s demeanor, are what the creative team wanted. It’s also consistent with the vague memory I have of the BNC production we saw years ago. But to me it interferes with the Romantic sense that Act II requires, and the image of Willis seemingly arising from their graves to carry out their mission creates an internally inconsistency: they’d already risen from their graves earlier in Act II when Myrta commanded them to do so (and their first appearances are almost vertical). Regardless, if my memory is correct and this is the way it’s done by BNC, this and other minor differences between this production and others are consistent with Alonso’s Giselle, not something the committee created to be different. And, as the famous ballet critic Ralph Waldo Emerson reportedly said, a foolish consistency is the hobgoblin of little critical minds. I think Alonso would have been proud of ARB’s production, and performances. 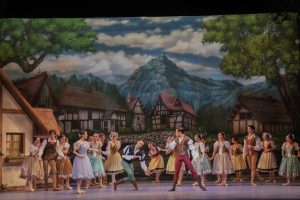 The balance of the featured opening night cast did well, although their significance was less critical to the production’s success. Act I’s peasant pas de deux was danced well by Shaye Firer and Ruben Rascon, albeit with minor technical glitches. To my eye, the recorded score’s rapid pace, while usually welcome, might here have been too fast. The dance includes some of the fastest footwork and complicated combinations in the ballet, and Firer, for one, appeared uncharacteristically apprehensive. But they both pulled it off.

With one exception, the character roles were less successfully presented – possibly because their roles were not given the same level of rehearsal time. Elisabeth White’s Berthe (here simply identified as Giselle’s Mother) was fully formed, but lacked the appropriate passion. Matanya Solomon’s Wilfred, while adequate, also seemed not yet fully developed. But Erikka Reenstiera-Cates infused her perfectly-executed Bathilde with appropriate concern, and then equally appropriate disgust. Emily Parker and Cates did fine work as the evening’s Moyna and Zulma. 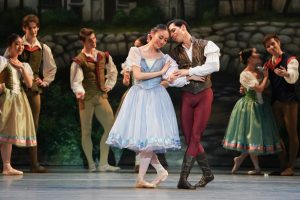 ARB’s new Giselle was a wonderful Valentine’s Day gift to New Jersey audiences – as well as those outside New Jersey, and is well worth seeing even if you’ve seen productions by the major companies. I understand that the ballet will be reprised in May at Princeton’s McCarter Theater, and for those unable or unwilling to trek into New York, or even for those who already have, it’s worth it to see this emotionally immersive ballet, and also to see what ARB is capable of. And who knows? Could there be a Swan Lake around the corner?