The snow that blanketed the northern New Jersey area Saturday morning, the first significant snowfall of the season, was the kind that was particularly annoying – a layer of ice covering an inch or two of slush. It was also annoying because it may have limited attendance at American Repertory Ballet’s early afternoon performance of The Nutcracker that I attended at New Brunswick’s State Theatre. There were large pockets of empty seats surrounded by audience members, usually an indication that tickets were sold but the buyers decided for whatever reason – possibly potentially treacherous snow – not to come. That’s unfortunate, because they missed a superior  Nutcracker production that included fine performances by company stalwarts as well as newcomers.

The ARB production, which premiered in 1962, has been performed continuously since 1964.  It’s been modified on many occasions since then, and is now is comprised primarily of choreography by its Artistic Director Douglas Martin. The production doesn’t have the bells and whistles of versions by larger companies with significantly larger budgets, but it has more than sufficient charm to make up for it, and more than a few idiosyncratic touches that make it both interesting and endearing.

The Christmas Eve party at the Silverhaus home that opens Act I is relatively unexceptional. [The reasons for the name being ‘Silverhaus’ in some Nutcracker productions and ‘Stahlbaum’ in others – as well as their daughter’s name being ‘Marie’ in some and ‘Clara’ in others – is too Byzantine to discuss here; and doesn’t matter for the telling of the story.] For example, Herr Silverhaus lights each “candle” on the Christmas tree individually, as would have been done in the period, rather than having all the lights suddenly set ablaze like the tree at Rockefeller Center. And the role of the Maid is actually interesting here – she’s given much more to do than in other productions, and has more interaction with the children and guests. 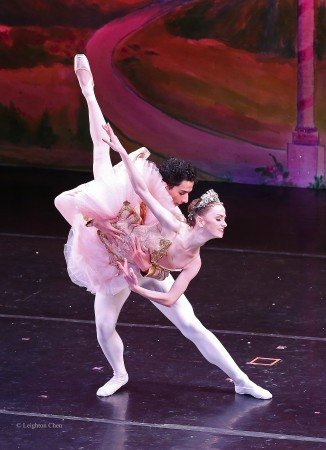 But this ARB production comes to life with Clara’s dream. For example, the “battle” between the toy soldiers and the mice is carried off with the precision befitting a military engagement, albeit an imaginary one, and with a cannon blast that’s almost too realistic-sounding. I also noticed that one of the Mice is outfitted like the Maid, giving depth and a natural child’s projection of adult characters into Clara’s dream. [Other mice may have worn clothing outside their mouse costumes that were similarly “borrowed” from other characters in the party scene – children’s mothers, for example – but I can’t be certain.] And here Drosselmeyer doesn’t just set the dream in motion, he’s visibly in control throughout. I liked the polish and air of mystery that Martin brought to the role when I last saw the production, but this Drosselmeyer, played by guest artist Douglas Jackson, is a good-hearted magician who hasn’t a sinister bone in his body.

When Clara and the Nutcracker Prince arrive in the Land of Sweets, they’re greeted by Dewdrop and multi-colored Flowers rather than by the Sugar Plum Fairy, which makes sense since they’re already outdoors and would be the first to respond to new arrivals. And Act II’s character dances have a sense of purpose and an energy level above the norm; instead of being dutiful stereotypes, they’re fun to watch.

And then there’s the knockout ending. This is decidedly not a “coming-of-age” production: Clara is old enough to be en pointe, but aside from that, there’s little interaction of any sort between her and Drosselmeyer’s Nephew/the Nutcracker Prince. This puts it more in the mold of Balanchine’s Nutcracker than, say, Alexei Ratmansky’s. I usually prefer the latter. But for a visualization of a child’s dream, ARB’s Nutcracker handles the usually unsatisfying ending well. Instead of the ballet ending with no sense of natural closure (Clara and the Nutcracker Prince just fly off somewhere), here the staging brings the story full circle, with Clara back asleep on the living room sofa, and the dream characters visualized behind a scrim – shadows of that remarkable dream, and the dream still real in Clara’s mind. It’s a beautiful piece of stagecraft no matter how many times it’s seen. 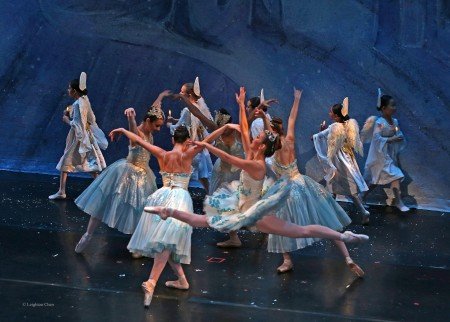 All this being said, the performance was not without flaws. Some were minor (e.g., those individually-lit candles on the tree all seemed to flicker on at the same time), some more significant (the performance overall seemed flatter than it had before, and the work of large groups of dancers looked somewhat raggedy at times). And there appeared to be less character nuance than I’ve seen previously – perhaps a product of the company having a second performance later in the afternoon and of normal end-of-run fatigue – although to be fair, with only a few exceptions this production does not emphasize character. And most importantly, its “new” male dancers haven’t had time yet to fully develop all the skills they’ll need.

In that respect, it’s undeniable that the company is in the middle of a rebuilding period. Many of the dancers who had been regular leads are no longer on the roster. It happens. Newly added dancers, including those not yet officially in the company, have filled the void. With some, there’s a lack of the distinctiveness that characterized their predecessors; with others, there’s too much of it. But overall, both the new dancers and seasoned company members handled their assignments well.

Of the “new” dancers, I was particularly impressed with two trainee/apprentices: Giulia Settimo and Emily Parker. I noticed Settimo as the “Elegant Mother” almost immediately because of her…elegance. But she also delivered an especially vivacious lead in the initial divertissement, now called Chocolate from Spain, delivering all the nuance and emphasis that the role requires without overdoing it. She was partnered by Austap Klymko, new to the company a year ago, whose partnering made it easy for her to shine. Parker led the Marzipan from Germany divertissement with special clarity and delicacy. [I claim no particular expertise, but the costumes and choreography made the divertissement seem more French or Swiss than German.] 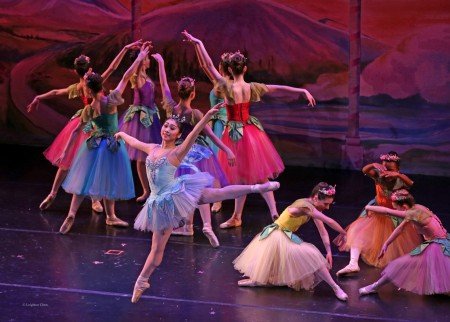 Aldeir Monteiro, a new member of the company, delivered an exuberant lead in Candy Canes from Russia, which enlivened the somewhat moribund audience. And David Greenberg, also new to the company this year danced a vibrant Cavalier Doll, and then handled most of his role as the Sugar Plum Fairy’s Cavalier well – including his solo and effortless-looking lifts that garnered audience applause. But he will need to hone his partnering skills; while his partnering generally was adequate (and those lifts quite remarkable) he often noticeably failed to keep his partner properly aligned during pirouettes. Mizuki Sato, new to the company a year ago, danced a Dew Drop of refinement and grace.

Company veterans Shaye Firer (Sugar Plum Doll and the lead in Tea from China, and Lily Saito (Snow Queen) did superior work, while Nanako Yamamoto excelled as the smoldering lead in Coffee from Arabia (well-partnered by Mattia Pallozzi). Finally, as the performance’s Sugar Plum Fairy, Monica Giragosian danced with quiet assurance and technical accomplishment and no small amount of flair– far removed from the at-times ‘flyaway’ ballerina I described when I first saw her in a featured role in this production. 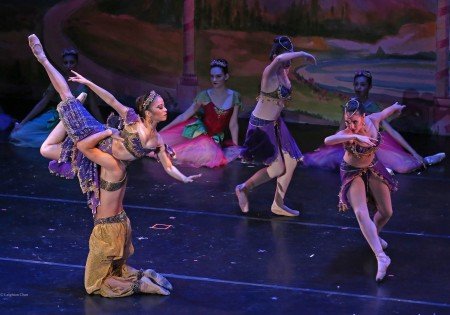 I cannot comment specifically on the young dancers from ARB’s Princeton Ballet School who appeared in supporting roles, since none were listed in the program insert that contained cast listings (including the Maid who is danced by a student dancer), but all danced well – particularly in the character dances. The young dancer who performed Clara handled her pointe work effortlessly, and the Nutcracker Prince did a fine job conveying the essential Act II mime.

Normally I would not single out any of those students who appeared in non-featured roles (although some of these young dancers had remarkable stage presence and character sense for their ages), but I can’t pass up the opportunity to note the smallest of the “Big Family” children (she wore a dress with a green ribbon near the hem). There was one moment when many of these student dancers were gathered downstage and at one point, while seated on the stage floor,  they all moved their arms in sequential sync. This tiny dancer at the end of the group stage right missed her cue by a couple of seconds. It was noticeable. When she realized what had happened, did it fluster her? Not at all. Her eyes just opened ever so slightly wider for a split second, and with all the sangfroid of a pro she repositioned her arms where they were supposed to be, and moved on. Remind me to look for her, whoever she is, on stage in about 15 years.

Finally, the presence of a live orchestra and chorus (the American Repertory Ballet Orchestra, conducted by Michael Pratt, and the Princeton Girlchoir Semi-Tones) added immeasurably to the production’s success. The orchestra played impeccably, and the voices, appearing to emanate from the audience, were appropriately ethereal and dreamy.