That sentence alone speaks volumes. A new, original full-length story ballet is rare enough, but one based on the classic Jane Austen novel is a particularly ambitious undertaking. That Martin and his company carried it off at all is a monumental achievement, as well as a cause for celebration. That it’s well worth seeing, notwithstanding some deficiencies, is another. Pride and Prejudice might benefit from some tinkering, but it’s a compelling addition to the area’s ballet portfolio. 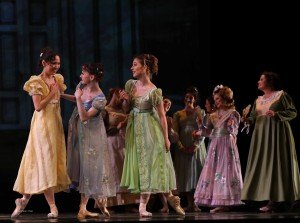 At the outset, I must emphasize that Martin has avoided the temptation, particularly with a novel as complex and panoramic as Pride and Prejudice, to significantly streamline the story. However, this is both positive and negative, as I’ll explain below. He also has not succumbed to any temptation to “Ashtonize” the ballet – this is hardly a painstakingly fussy snapshot in time. On the contrary, because there’s so much to cover here, the ballet’s pace at times seems to race like a carriage somewhat out of control in order to move expeditiously from one scene to another. Sometimes literally.

The story, of course, is one of manners and money, and the dominance of both, in the society of relatively upper-crust early 19th Century England (the book was written in 1813), and the need to maintain or acquire both in the context of selecting a mate. Its central focus is Elizabeth Bennet’s initial prejudice against Fitzwilliam Darcy by interpreting his reticence and rectitude as excessive pride, and her eventual conclusion that marrying for love is far more important than marrying for money. Surrounding this central focus swirl the evolving relationships between the five Bennet sisters and various suitors, and the interference of family, friends, and assorted characters who seem to unexpectedly materialize at social events, or just show up, like bees looking for something to pollinate, or sting, at all times doing so with utmost decorum and good taste.

It’s clear that Martin’s ballet has been a labor of love. The effort involved in creating an evening length story ballet from scratch, and under budgetary restraints that always impact relatively small companies with relatively limited resources, is daunting. In many ways, the outcome shows that the effort largely paid off. 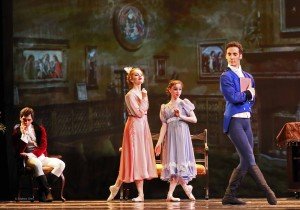 For example, the ballet’s accoutrements are beautifully assembled and its production values are relatively high. Even with budgetary restraints, the costumes that at times fill the stage like a flower bed, designed by A. Christina Gianinni, look authentic, distinctive, and elegant without being overly opulent, and the scenic design and projections by Omar Ramos, enhanced by Christopher Chambers’s lighting, bathe the stage in a watercolor-like ambience evocative of expansive country estates and social gathering areas within them.

More impressive still is the obvious effort and care that went into selecting musical accompaniment. In the absence of a specific score, commissioned or otherwise, Martin and his colleagues, Jonathan Benjamin and Taras Pavlosky (identified in the program as “score librarians”) assembled one, primarily using excerpts from compositions by Ignaz Pleyel, an Austrian who was popular in London during the time Pride and Prejudice was written and who Martin discovered was one of Austen’s favorite composers, as well as from pieces of the period by John Field, and Felix Mendelssohn, both of whom Austen reportedly collected, and Franz Schubert. The assembled score, adapted for contemporary orchestra, was played with distinction by the Princeton Symphony Orchestra (conducted by John Devlin) – the orchestra’s first ever live performance at McCarter Theater.

And although the ballet has barely an unchoreographed moment, Martin has crafted a plethora of distinctive dances. I’ve commented previously on Martin’s facility moving large groups of dancers, and that is evident here. One would think he’d run out of ideas, but that didn’t happen. His staging is both intelligent and intriguing. Essentially, Martin has created two different ballets: Act I emphasizing the societal ambience, and Act II the individual characters, and has further subdivided Act II by utilizing a “split-stage” presentation. He’s also wisely peppered the ballet with much needed humor, keeping the audience off-guard, cleansing the cerebral palate, and ensuring that the emotional action does not appear excessively one-dimensional. 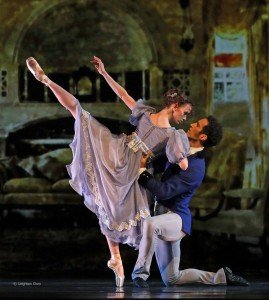 Finally, and by no means least, the ballet is blessed with fine performances by the lead dancers and character artists (including a dandy portrayal of Mrs. Bennet by Mary Barton, the choreographer’s wife and the company’s resident choreographer and ballet master). Most prominent among them is that by Monica Giragosian, who plays the novel’s protagonist, Elizabeth Bennet. Giragosian is on stage through most of the ballet, and is a pleasure to watch even when she’s standing still and moving only her face and, more significantly, her eyes.

But each of these qualities that help make Pride and Prejudice admirable also breed deficiencies that impact the ballet’s overall impression.

A prime component of most memorable literature, including Pride and Prejudice, isn’t just its story, but its atmosphere, and in crafting an adaptation reasonable fidelity to the book’s ambience, as well as its story, is essential. Martin might have done justice to the story by distilling it to its essence but doing so would have scuttled that essential atmosphere. It requires a balancing.

But at least on first view, the ballet errs too much on the side of atmosphere, particularly in its first act. I don’t doubt that Martin attempted to reduce the novel to its key scenes, but there is still too much time spent on the nuts and bolts of Austen’s story and on characters that, for the ballet’s purposes, don’t need to be there. For example, aside from the fact that it’s part of the novel, and notwithstanding the excellent portrayal of the character by former American Ballet Theatre dancer Kathleen Moore (now ARB’s Company Teacher), were the scenes involving Lady Catherine de Bourgh really necessary to include?

Additionally, with the plethora of characters (23 individually identified in the program, plus young ladies and townsfolk), and the limited plot development in Act I (what’s there might have been sufficient, but it was overwhelmed by atmosphere), it was too confusing for too long. Who are these people? Why aren’t they doing something? One can’t assume that every member of the audience is familiar with the story, and without that advance knowledge, following the stage action – again, particularly in Act I – can be tortuous. In the inexplicable absence of any story-as-presented synopsis, and with the rapid-fire scene/location changes, the mind wanders and after a while it all tends to blend together. Indeed, Act I seemed comprised almost entirely of scene changes, each bracketed by a variety of exuberant “country dances” (related to those stolid “court dances” by nobles that interrupt the action in many classical ballets), which in turn were introduced by incessant and increasingly annoying mimed invitations by one character or another to the assembled gentry, landed or otherwise, to dance. And as distinctive as the dances are choreographically, there are so many of them that there comes a point when, visually if not technically, it all seems too similar. 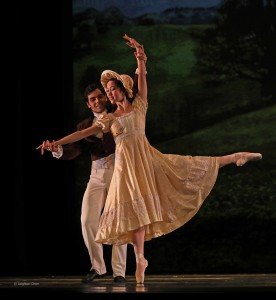 The seeming absence of dramatic development (as opposed to plot development) in Act I, in addition to reducing the presentation to atmosphere, does not allow substantive character evolution. There’s no conflict (at least not sufficiently visible) requiring resolution; no challenges to overcome. It’s just the way it is. Doubtless that’s also the way the novel is, and the way life among the privileged was – always keep those emotions under wraps, but catering to it negatively impacts the presentation. The ballet’s very sweet (but not saccharine) concluding romantic pas de deux between Elizabeth and Darcy (to music by Schubert, which itself provided an aural respite from the sense of musical sameness) delivered as much of an emotional catharsis to the audience as it appeared to do to the dancers. But the audience had been waiting for some kinetic high for three hours: It shouldn’t have taken until the end of the ballet for emotional adrenaline to kick in.

And one final less-generalized comment. As commendable as it might otherwise be to encourage the dancers to stretch beyond comfort zones, in a story ballet like this there’s a need to make the presentation look as good as it can, and not create what might be insurmountable choreographic roadblocks from which there’s no place to hide. Martin is particularly good at choreographing to the dancers he has, but here, for example, it doesn’t do the presentation any good to have all the tertiary male dancers unable to properly complete emphasized double tours en l’air. Less might have been more.

In general, however, the dancers, and particularly the leads, did quite well with both the choreography and the acting. In addition to Giragosian, who at this point, based on this and prior performances, I suspect I’d enjoy seeing in anything, and Barton, Jacopo Jannelli was a super George Wickham, both in terms of his acting and execution, Lily Saito an appropriately elegant and relatively vacuous Jane Bennet, and Shaye Firer a compassionate Charlotte Lucas (although I kept waiting for the choreography to provide her character with opportunities to display the emotional depth that she’s highly capable of).

Mattia Pallozzi was a commendable Darcy, but portraying a reserved, emotionally distant character, even one with passion simmering beneath the surface, didn’t permit significant displays of the ability he’s demonstrated in previous ARB programs.  As Caroline Bingley, however, Erikka Reenstierna-Cates, a relative newcomer to the company, was a knockout, infusing what is a secondary role with the kind of natural flair that dominates a stage. Aldeir Monteiro did a fine job as the peripatetic Charles Bingley. And Nanako Yamamoto, Emily Parker, and a particularly magnetic, funny, and touching Karen Leslie Moscato somehow managed to make their portrayals of the other Bennet sisters, Lydia, Kitty, and Mary respectively, stand out on the busy stage. Finally, kudos to Austap Klymko, who pulled off converting William Collins, an obsequious, annoying, obsessed character one would try to avoid like the plague because he had some contagious intellectual form of it, into an early 19th Century dork equally pathetic and sympathetic, and almost (almost) tramp-like lovable.

Pride and Prejudice is a noteworthy ballet for the simple fact that it’s here at all. It’s not only the first ballet version of this book, my understanding is that it’s the first ballet choreographed to any Jane Austen book. But it also is noteworthy on its own merits. Despite deficiencies, prejudices, that seemed evident to me on first exposure (and which are subject to reconsideration on repeat viewings), it’s a must see for anyone interested in viewing a ballet that’s new and different and extraordinarily ambitious, and that ultimately will prove to be a source of pride for the company.

Carlota and student dancers shine at the Limón Festival