Glazunov Variations, There Is A Time, A Shepherd Singing (And I Still Heard Nothing)

American Repertory Ballet returned to the McCarter Theatre in Princeton on Friday evening with a program that was both glorious and puzzling.

In a nutshell, the performances overall were quite good, and the program included three very different dances, each showing the company’s wide-ranging capability. The evening’s highlights included the company’s extraordinary rendition of Jose Limon’s There is a Time, Jacopo Janelli’s discernable progress reflected in Kirk Peterson’s Glazunov Variations, and Samantha Gullace’s performances in whatever she was given to do. But the program’s world premiere, company Resident Choreographer Mary Barton’s A Shepherd Singing (And I Still Heard Nothing), was the evening’s centerpiece. 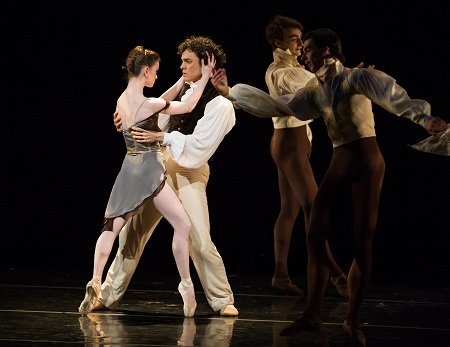 To say Barton’s ballet is unusual is an understatement, and it represents an impressive creative stretch. It’s not entirely successful, but what it may lack in choreographic sophistication and variety it makes up for in audacity and intelligence, and images from it linger in the memory long after the performance ends.

The piece’s title is derived from a statement presumably made by Beethoven (referenced in the program, but not otherwise identified): “But what humiliation, when…others heard a shepherd singing and I still heard nothing.” It’s not surprising, then, that the ballet relates Beethoven’s struggle to compose while he fought a losing battle with hearing loss. That may be the only aspect of the piece that’s not a surprise.

Beethoven’s ironic battle with deafness, attributed by many to relentless tinnitus, commenced in or about 1798-1801 and worsened gradually until roughly 1814, when he became totally deaf. During this time, Beethoven continued to be productive, but the struggle became more difficult as his deafness increased. He created his Seventh Symphony between 1811-1812, while he was attempting to improve his health at a Bohemian spa, and it premiered in Vienna in 1813.

Barton here assumes, reasonably, that the process of composing this symphony was a difficult one, and she visualizes the process of its creation as emblematic of his ongoing struggle as his deafness worsened. She also uses the sounds of the symphony to simulate this struggle and as a template for her choreography.  And through it all, the ballet’s star is the symphony, guided by the outstanding rendition provided, live, by the Princeton University Orchestra.

As the piece begins, a storm rages (the thunder not only setting a mood, but previewing the interplay of uncontrollable forces that follow). Beethoven, portrayed by Michael Landez, is seen bedridden, attended by a man and woman (presumably a doctor and nurse – they’re not identified), who soon give up hope and depart, leaving the composer to his torment.

When they leave, that part of the ballet that illustrates Beethoven’s struggle begins – with an equally thunderous shock. Seemingly from Beethoven’s aching head springs the representation of the force behind his imminent deafness. The character (named ‘Fate & Silence’) is a spritely little demonic creature. Played by Monica Giragosian, she comes across as at once a stone-faced gargoyle, Tinkerbell, and that pesky flea you can’t swat away. It’s a fiercely expressive performance, but the expression is all in the movement delivery: her face transmits no emotion; she just is. She has little in the way of dancing to do, but Giragosian looks both adorable and frightening as she adheres to and wraps her body around Landez’s like cellophane. She’s the ballet’s most unusual, and compelling, presence.

After Giragosian initially appears and zooms onto and around Landez’s face, covering his ears, he pushes her away, and she yields to another dominant force: Beethoven’s ‘will to create’. Costumed as a warrior goddess (her character is named ‘Art/This Great Goddess’), Nanako Yamamoto gobbles the stage, and her dancing, like the force she represents, is powerful – think Hippolyta in Balanchine’s A Midsummer Night’s Dream, or ‘War and Discord’ in his Coppelia. Unlike the force represented by Giragosian’s character, Yamamoto’s force rarely stops dancing, and it counters and, for a time, outweighs the force of ‘Fate and Silence’. When this happens, Beethoven is able to compose. And here, ingeniously, Barton gives corporeal existence to the sounds Beethoven is finally able to hear within his head. These characters, six dancers collectively named ‘Notes’, are first seen popping up from behind a movable stage barrier like little jack-in-the-boxes, but later emerge to represent and effectively comment on the process while reflecting the creative result. Ultimately, at least as of the composition of the Seventh Symphony, Beethoven must coexist with both forces controlling his artistic ability.

I liked the piece from the outset for its obvious intelligence and imaginative staging, as well as the intellectual puzzle it posed. But it soon ran into problems.

Landez, a company Apprentice, did a fine job, but has little to do but look anguished, fight off Giragosian, and try to focus. But how many times can he be shown peeling Giragosian off his body, holding his ears as if his head were about to explode, writing and then tearing up composition paper? The continuing gestures have limited impact, no matter how well Landez relates them.  Similarly, Yamamoto’s powerful dancing becomes tiring to watch, as the choreography for her seems rarely to significantly change.

Yet more problematic is Barton’s effort to weave this personification of motivating forces into Beethoven’s reality. The concept has been done before, but here seems ill conceived.  The ‘real’ people, other than Beethoven himself and the ‘doctor and nurse’ at the ballet’s beginning, are limited to one character – his ‘Immortal Beloved’ (Lily Saito), whose presence is of little consequence. (She flutters through a scene or two, they’re attracted to each other, he proposes…she rejects him. The guy just can’t catch a break.) If Barton is going to weave the imaginary pas de trois of Beethoven, creativity, and deafness (with Notes as a sort of chorus) with a sense of Beethoven’s reality, it needs to be done with a ‘reality’ that’s more than superficial.

Perhaps recognizing the difficulty of integrating a reality that’s really real, roughly two thirds of the way through, Barton startlingly shuts the ballet down. The imaginary characters disappear, a piece of composition paper is projected on a screen above Beethoven’s desk, and, with his back to the audience, he composes – presumably as he’d been doing all this time except now the forces aren’t illuminated by characters. He flails about, covers his ears, rips up paper, battling the demons that all along only he could feel, and returns to compose. And then Beethoven too leaves the stage, and for the piece’s final few minutes the symphony is played as a concert, presumably its premiere. At its conclusion, Beethoven reappears. His symphony, finally completed despite his battle with deafness, is a success, and although he can’t hear what it sounds like, and can hear none of the adulation, he basks in it.

But this raises another issue: creating an intellectual puzzle is not a bad thing, but creating confusion is. I could see that many in the audience were as puzzled as I was when the dancing ended before the piece did, and when Beethoven eventually left the stage. It took awhile before I figured this out (or think I did), and I suspect many in the audience never did.

Glazunov Variations, choreographed by Petersen ‘after’ Marius Petipa, is a collection of excerpts from Raymonda that has been grist for many different choreographers, and its classism in the context of its folk idiom makes it a stretch, and an opportunity, for dancers to demonstrate their technical facility. This performance of it was very good generally, and the dancing by the leads, Gullace and Jannelli, was particularly noteworthy. Jannelli has been improving consistently since he joined the company, and his classical competence here was revelatory. A little rigid at first (not inappropriate in this piece), in his 4th Variation he showed a level of power and elevation I’d not previously seen, as if jet-propelled. He lost a little of that energy during the Coda, staying relatively low to the stage floor, but still did a fine job leaping around the stage. But his energy seemed to give out as the ballet concluded. Nevertheless, it was a very impressive effort, and unlike some dancers, he didn’t quit when the going got rough.

Gullace, on the other hand, danced terrifically from beginning to end. Appropriately regal and distant at the ballet’s beginning, she sailed through whatever the choreography threw at her. Her pointework was exemplary, her line crystalline. Yet more impressive was her demeanor. In this difficult role to execute well, she was in total control throughout, and by its end seemed to be having a blast. Though their roles in the piece weren’t as critical, Giragosian, Yamamoto, Shaye Firer, and Ellen Lou also excelled. 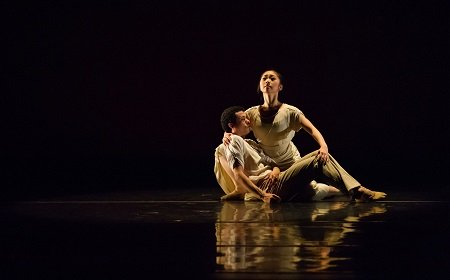 Jose Limon’s There is a Time transitions through a series of vignettes representative of the words of Chapter 3 of Ecclesiastes, with each of its twelve segments visually relating the corresponding scriptural themes. It was created by Limon in 1956, and although it is clearly a creation of its modern-dance time, it is timeless. Some of the segments are more impressive than others, but the piece as a whole is a gem.

No less of a gem was ARB’s performance.

Last fall at the Joyce Theater in the New York during its Limon Festival, I found ARB’s performance of it to be ideal. I don’t know how ‘ideal’ can get any better, but on Friday, it did. Although the cast as a whole danced flawlessly, each dancer who I found particularly compelling at that New York performance took his or her role to another level. Mattia Pallozzi was exceptionally moving in the ‘Born and Die’ segment, Karen Leslie Moscato’s ‘War’ was an encapsulation of war’s insanity: she was part instigator, part witch, part victim, and part madwoman – and totally magnificent. Saito and Landez reprised their lovely ‘Embrace’, and Gullace was breathtaking in the three segments in which she appeared, but particularly in ‘Silence and Speak’, together with a the highly capable Mario Gonzalez. And in ‘Heal’, Mizuki Sato, a company Trainee/Apprentice, generated palpable emotional depth.