I planned to take another “Nutcation” this year, but finding out that New York City Ballet’s Unity Phelan and Joseph Gordon would be guesting with American Repertory Ballet in nearby (relatively) Princeton in two performances on November 23 prompted me to reconsider. I attended the afternoon program.

First Nutcrackers of the season, as this performance was, can be tricky for any company. There’s no dearth of enthusiasm, although sometimes there can be too much of it, but a greater problem is an insufficiency of rehearsal time in general, and stage rehearsal time in particular. Add to that opening jitters and early winter illnesses and you have a recipe for potential disaster. None of these problems seemed to bother ARB at this performance.

This version of Nutcracker is a hybrid. Certain of the original choreography by Audree and Bud Esty (the Party and Battle) is maintained, and additional choreography (many of the character dances and the Snow pas de deux) has been added by Resident Choreographer/Ballet Master Mary Barton, with the remainder choreographed by the company’s Artistic Director, Douglas Martin. And Phelan and Gordon imported what appeared to be George Balanchine’s choreography for the Sugar Plum Fairy / Cavalier pas de deux to add to the mix. Nevertheless, the production held together well, with the ballet’s strong suits being the transition to Clara’s dream, the wonderfully conceived battle between the soldiers and the mice (including having the mice costumed as if they were the adult party guests who’d transformed into mice – perfect for a young child’s nightmare/fantasy), some of the character dances, and most notably, the magical ending.

That being said, and as I’ve previously stated, this Nutcracker doesn’t have the bells and whistles of other versions up and down the pike, or the technical performing polish of those productions, and shouldn’t be expected to. That was evident perhaps even more than usual by the appearances of Phelan and Gordon, who were this performance’s centerpieces (and the one that evening) and immediately eclipsed whatever and whomever was on stage with them. But that was to be expected as well. And they appeared as welcoming to the rest of the ARB cast as the cast was to them. 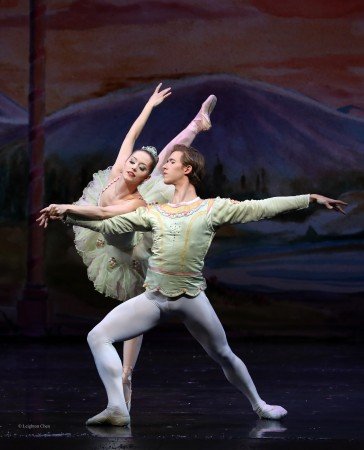 For Phelan, this was something of a homecoming. Born in Princeton, she was first schooled at ARB’s Princeton Ballet School, beginning at four years old, before segueing to NYCB’s affiliated School of American Ballet and then to the company in 2013, where she now is a soloist. Gordon, promoted this past Spring to principal dancer, is a native of Phoenix, AZ, who joined the company in 2012.  Reviewing their performances in this context is silly: suffice it to say that adjusting to the smaller confines of the McCarter Theater stage didn’t dampen their abilities or bravura execution, with superior solo work by both. And seeing Balanchine’s choreography up close provides a clear view of how wickedly difficult the partnering is for both dancers.

Also to be expected at this performance was evidence of the rebuilding now underway at ARB. I’ve seen three prior performances of ARB’s Nutcracker (the most recent two years ago) and the cast on Friday afternoon had few dancers remaining from those performances. That degree of inexperience, as well as opening nerves, had to have had an impact. Not surprisingly, the company dancers who performed with the greatest polish were also two who have been with the company for several years, Shaye Firer and Nanako Yamamoto, both of whom danced roles in which I’ve previously seen them. Firer’s Dew Drop was executed crisply and joyfully, while Yamamoto was as smoldering in “Coffee from Arabia” as she was previously (well-partnered by an appropriately lustful Aldeir Monteiro).

Of those new to me, Tanner Bleck, a member of the company, did multiple duty as Drosselmeyer’s Nephew, The Soldier, the Nutcracker Prince, and the Lead Male in Candy Cane – in his Nutcracker Prince costume (I presume none of the other dancers who alternate in this role was available), dancing with authority in each role. Emily Parker (not exactly new to me – I recall seeing her dance with ARB prior to formally joining the company) danced the lead in “Marzipan from Germany” with extraordinary clarity. Journy Wilkes-Davis showed promise as the Snow King (partnering Ryoko Tanaka as Snow Queen). And as Drosselmeyer, Edward Urwin, a company alumnus, was far more ebullient than sinister, which works well in this production. 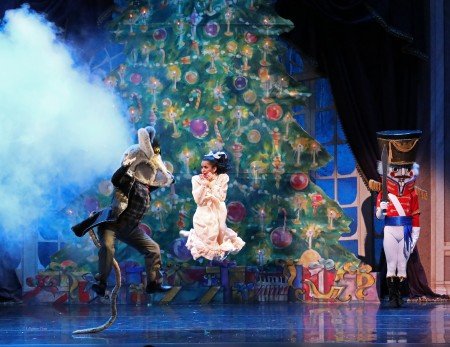 One of the hallmarks of this production is the thorough integration of dancers not yet with the company (ARB2 dancers, apprentices, trainees and school students) into the action – which appears to have been Phelan’s introduction to performing – and in this year’s production, the caliber of these young dancers was evident. Unfortunately, however, presumably for economic reasons, the program’s lists all dancers who rotate in each of the roles. Those dancers at a particular performance are indicated in a post outside the orchestra entrance, but that’s limited to dancers in lead roles, so, with four or five or more dancers indicated in the program as appearing in supporting roles that only require two, deciphering who they are at any given performance is impossible for someone not already familiar with them. With that in mind, and in addition to the engaging performance by trainee Mary Faith Wielgos as Clara, the young dancers who supported the leads in the “Coffee From Arabia” dance were particularly vibrant, and those in the other character dances, both soloists and corps dancers, were a highly competent group. And I note that one dancer presently with ARB2, Nina Yoshida, formerly danced with Gelsey Kirkland Ballet and I recall reviewing her performances there very favorably. If all members of ARB2 and company apprentices and trainees are of that caliber, ARB’s future, which includes being a founding constituent of the New Brunswick Performing Arts Center in New Brunswick next year, seems in good hands … or on good feet.

As for the Nutcracker, ARB’s is a comfortably, mom’s apple pie production, that provides a quality introduction to ballet for those not already familiar with it, and is a worthy destination for those who are.  And that delightfully appropriate and insightful ending is a heart-grabber every time.

As of this publishing, the remaining performances of ARB’s Nutcracker will be on December 7-8 (at South Orange Performing Arts Center), 14-16 (at Two Rivers Theater in Red Bank), and 21-23 (at the State Theater in New Brunswick, accompanied by the Princeton Girlchoir and a live orchestra).