The seasons evocatively converged in mid-July as Amy Seiwert’s Imagery presented SKETCH 7 – Wandering at Fort Mason Center in San Francisco. It was a beautiful warm summer weekend, especially by SF standards, but on stage, it was all winter, Franz Schubert’s Winterreise song cycle to be exact. Twenty-four separate songs with poetry by Wilhelm Müller, the score shares the story of a protagonist on a “winter’s journey” (Winterreise translated), trekking through a natural environment, encountering a myriad of forces and searching for contentment. This was the source material that fueled Amy Seiwert’s new ballet for the seventh edition of Imagery’s SKETCH series.

SKETCH is designed to challenge choreographic patterns and processes. True to form, Artistic Director Seiwert posed a mammoth puzzle for 2017’s edition, something that was new for her – choreograph a full-length, narrative dance. Wandering is the result of that experiment. A two-act ballet where piano, voice, text and choreography unfold together in a parable about humanity’s quest for happiness.

As the company waited in the dark, only dim lanterns peppering the space, James Gilmer walked slowly onstage from one of the right wings. He placed a record on the record player and gently lifted the needle. Having completed this task, he walked towards the other seven dancers and instantly, Wandering was off. 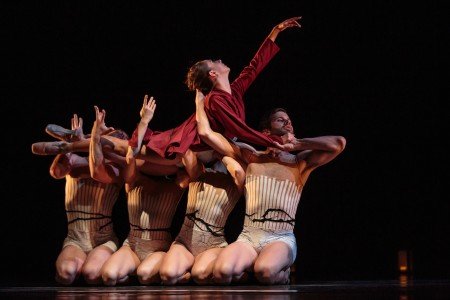 Right from the start, a number of thematic and theatrical elements emerged that would inform Wandering until its final blackout. First was a long red coat. This coat was integral to the work because it signaled who was embodying the protagonist role at any given moment. Each of the eight of the Imagery artists would don this piece of clothing at some point throughout the performance, each of them having a chance to experience the central character. And sometimes, taking on that responsibility was welcome, sometimes it was reluctant, sometimes it was even indignant and forced. Next was a palpable and conflictual pull both towards the group and against the group. Seiwert created a glowing choreographic container that examined both extremes – a real conversation between lone-ness and togetherness; seclusion and community. An atmosphere of sorrow and isolation leapt from the stage but at the same time, the dancers seemed pulled towards each other like magnets. Last was a specific choreographic point of articulation: the head. Hands would lead the chin, heads would lean on each other, palms would encircle the skull, and eyes would stare potently, looking for answers. This treatment of the head particularly stood out, not just because of its cerebral quality, but because when you walk, surprisingly, it is the head that moves first, not your feet. And with Wandering being about a journey, an emphasis on the head, and leading of the head, spoke volumes.

But there were even more noteworthy elements in Wandering that deserve mention. Seiwert’s extraordinary treatment of ballet vocabulary surprises, delights and continues to astonish at every turn. It’s not just injecting a flexed foot here and there or experiencing a step on demi-pointe instead of full pointe. Seiwert mines further, delving into what a flexed foot can do as a transitional movement in lifts and promenades, or how a reaching extension suddenly broken by flexion makes a narrative statement. Pencil turns on pointe also entered the vernacular, as did arms exploring through the space and lifts breathtakingly ascending from the floor. Every Imagery dance artist excelled in both technique and artistry. And such silent jumping! Especially impressive was the Act II pas de deux by Jackie Nash and Ben Needham-Wood, which was technically a pas de trois, with Needham-Wood managing to effortlessly hold one of the lanterns for the duration of the duet.

Susan Roemer’s costuming was another example of true inspiration. Of course there was the red coat/protagonist connection, but that was only one part. Act I’s short unitards oozed winter with their snow-white base and tree branch motifs curving around the torso. And then in Act II, the unitard colors switched, perhaps indicating that the journey had moved into night. Near the end of Act I, it started gently “snowing” onstage, and the effect was quite something (light and scenic design by Brian Jones) – it really felt cold in the theater. And just like with Roemer’s costumes, in Act II, the fallen snow turned black, again likely alluding to darkness, or perhaps a darker portion of the protagonist’s journey.

Soon, Imagery’s Wandering heads to New York for the Joyce Theater Ballet Festival (the piece was supported by the Joyce Theater Foundation). While I won’t get a chance to see that performance, I do wonder what the dance will be like on a different stage. The Cowell Theater is an intimate space, to be sure, and while it didn’t ever look crowded (even when all eight dancers were onstage), it would be fascinating to view it in a different venue.