One of my favorite parts of the San Francisco summer dance season is getting the chance to see what the artists of Amy Seiwert’s Imagery have been up to. For the past decade, they have brought their unique SKETCH series to the Bay Area each summer – a creative incubator that presents dancemakers with a set choreographic challenge, encouraging them to embrace risk and move out of their comfort zone.

Summer 2020 is now a memory, and one that didn’t include a SKETCH event. But the series wasn’t gone; instead, like the entire performing arts community, it was regrouping. And as we ushered in the final three months of this unprecedented year, Imagery was ready to reveal to audiences what had been percolating. For this monumental tenth edition, Artistic Director Amy Seiwert has posited the following invitation to four creators: “to create a dance film following social distance protocols, inspired by those who have been impacted by the recent health, economic, and injustice crises.” Starting October 1st, one of the films premieres every two weeks, (available to viewers until the end of 2020 at https://www.asimagery.org/sketchfilms) and the final film will be released in early 2021. 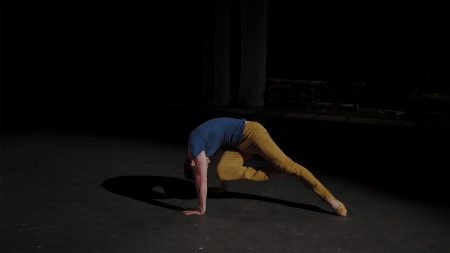 First up was the debut of John Haptas, Kristine Samuelson and Amy Seiwert’s Crack the Dark, a seven-minute documentary/dance film featuring choreography by Seiwert and solo performance by Weston Krukow. As the film opens, we are introduced to Patrick Mulvaney, chef and owner of Mulvaney’s Building and Loan restaurant in Sacramento, which was forced to temporarily close due to COVID. In these first few minutes, the viewer learns how Mulvaney looked beyond that loss and sought action. He harnessed both his culinary gifts and his commitment to mental health advocacy, sharing his passions and serving others. Resilience. Persistence. A desire to help. Crack the Dark is Seiwert’s response to that plucky spirit, a spirit that one can see mirrored in the performing arts. As the film concludes, Krukow poignantly performs Seiwert’s choreography for Mulvaney in an otherwise empty theater.

Lit onstage by the theater ghost light, Krukow begins a varied physical journey. Tactile gestures combine throughout with the notion of expanse. Open palms run along the torso, down the forearms and gently brush the temple. Simultaneously, sinuous arabesque lines, long lunges and avant-garde balances carve out the space. And slides abound, inviting a tone of forward motion and the idea of falling into somewhere new. The presence of the ghost light (a single bulb in the center of the stage, lit when the theater is dark) felt particularly moving. Opinions vary greatly on the significance of the ghost light – from tradition to logistics to folklore. Here it felt equally layered. It was a beacon of safety. It was a guide back to an entity that has been largely uninhabited for most of this year. And it was recognizing all the souls that would have graced the space over the past six months and still won’t be able to over the next few. As intimated by the film’s title, when the darkness has finally been broken, a light has been left on, ready and waiting to welcome you back. 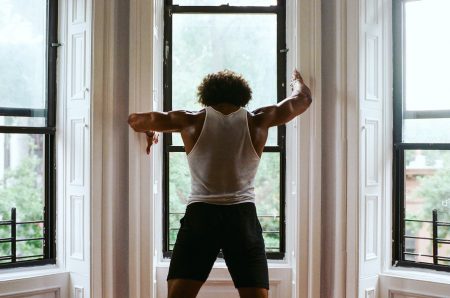 Friday, October 16th brought the debut of the second film in the series, WeAIghT, Director/Choreographer Jennifer Archibald’s response to SKETCH’s call. A five-minute world premiere collaboration with filmmaker Andrew Cashin set to “And I Ask You,” by Philip Hamilton, WeAIghT seeks to, “examine the emotional impact of the Black Lives Matter movement during the recent protests in New York City,” as noted in the press materials. And the emotional depth of the film is undeniable – such potent, raw and pure intensity commanding every single second.

The solo, brilliantly danced and interpreted by James Gilmer, toggled between two frames – a seemingly empty apartment space and a sizable chalkboard of powerful, often haunting, heartbreaking phrases. That sense of extremes, established early on, would continue to inform every aspect of the work. As Gilmer traversed the space, the juxtaposition between openness and constraint was palpable. Expansive spaces were met with equally expansive choreography: full splits; huge developpés; stretchy extensions in all limbs. In those moments of vastness, the yearning and anguish read so clearly, yet a sense of possibility felt present too. In contrast, numerous scenes found Gilmer stuck against or within the constraints of the structure; his ability to reach the fullest expression of movement purposely obstructed by his environment. Whether in doorway jambs, or in small corners of the room, Gilmer strikingly communicated frustration at being trapped.

Archibald’s choreography and Gilmer’s performance riveted at every turn. A palm splayed against the chalkboard in disbelief; then it gripped the face with urgency and despair. A crawling sequence was filled with deep struggle but at the same time, an incredible persistence and resistance. And then there were the instances of simplicity. Pedestrian walks, still glances, a fixed gaze out the window. But make no mistake, there was nothing simple about them, their presence spoke volumes. 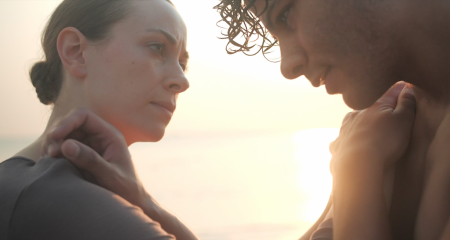 In 2020, the word ‘pandemic’ has become part of daily vocabulary – on the news, at the grocery store, in everyday interactions. Stephanie Martinez’s Purple Skin reminds viewers that forty years ago, there was another destructive, deadly pandemic, one that was met with widespread ignorance, hatred, blame and stigma – the early days of the HIV/AIDS plague, which decimated the gay community and stole a generation of young men. But in the face of all the fear and intolerance, there were also those who tirelessly helped and comforted the sick and the dying, and this five-minute short, directed by Dean Berdusis and choreographed by Martinez, honors one of those amazing souls, Chicago-based activist Lori Cannon.

As narration by Cannon haunts the air, Purple Skin, which presumably references Kaposi’s Sarcoma, begins as a solo for Joseph A. Hernandez on a beach. Tactile meets despair as veins are systematically traced and skin is investigated for any sign of abnormality. As the scene shifts from outdoors to indoors, one is struck by the sense of isolation and loneliness. Hernandez mournfully stares out a window and his palms push the space away in hopes of an open door. Then, he trudges through sand, desperately trying to put one foot in front of the other, until eventually dropping to one knee, unable to persist. Scoring Martinez’s potent choreography was a pulsing, somber composition by Kishi Bashi and Emily Hope Price. The music’s constant propulsion, never reaching a cadence point, felt particularly affecting, and added an extra layer and texture to the narrative frame.

Kelsey McFalls enters the space and Purple Skin grows into an emotional duet between her and Hernandez. The pair lay hands lovingly on each other, offering a genuine, authentic embrace, when so many were afraid of touch. Partnering sequences are infused with a mutual give and take, each of the dancers needing the other in order to create shapes, keep balance and extend limbs. And the unfailing support was so alive in the choreography. As the film neared its conclusion, Hernandez had more moments of contracting and crumbling to the earth. But he never completely reached the ground; McFalls was there to catch him.

The final film in the SKETCH Films: Red Thread series will debut in early 2021.