An American in Paris, the 2015 Tony Award winning musical based on the 1951 Oscar winning movie of the same name, is known for ballet featuring prominently in it. Dance frequently plays an important part in Broadway musicals, but it’s relatively rare for ballet to be the genre of dance utilized. It’s even rarer for ballet to be at the center of the story, and rarer still for an actual ballet to close the show. In other words, An American in Paris is full of ballet. 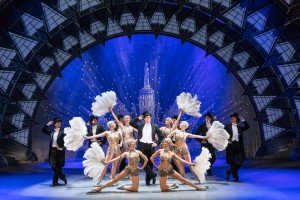 An American in Paris Touring Company, photo by Matthew Murphy

British-born Christopher Wheeldon, the director and choreographer of An American in Paris, rose from dancer to resident choreographer at the New York City Ballet (he previously danced with the Royal Ballet Company before joining NYCB). Only a master choreographer and director could make the transitions between scenes so beautifully seamless. Dancers moved tables and chairs, circling them elegantly in the air. Nothing felt choppy. To the contrary, everything flowed incredibly smoothly, as if every bit of what took place on stage, even moving a prop from one place to another, was ballet. One can’t help but wonder if Wheeldon will find more success on Broadway following in the footsteps of Jerome Robbins, another former dancer turned choreographer (Robbins went from being a dancer with American Ballet Theatre to Associate Artistic Director with George Balanchine at NYCB). Robbins ultimately won 5 Tony Awards. Based on An American in Paris, I feel certain someone will be begging Wheeldon to choreograph on Broadway again soon. Indeed, Wheeldon recently directed and choreographed a gala production of Brigadoone at New York’s City Center. Maybe it will be Broadway bound? 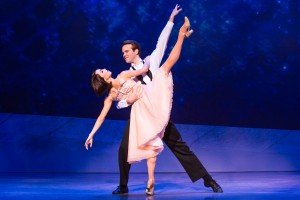 Wheeldon’s choreography for An American in Paris probably wouldn’t succeed outside of its musical context as stand alone work for a ballet company (the ballet at the end has vibrant colors but is sort of comically dull).  Not everyone in the touring cast I saw was expert at ballet or singing. And yet it worked. There was something refreshingly down to earth about the group of performers I witnessed, some of whom excelled more at dancing than singing, and some of whom sang better than they danced. Leads McGee Maddox (Jerry Mulligan) and Allison Walsh (Lise Dassin) didn’t give me goosebumps when they sang. Maddox, however, almost did with some of his dancing. His leaps stretched endless and left me in awe. Matthew Scott (Adam Hochberg) seemed the strongest actor of the bunch to me, and he could sing, but he looked less comfortable tap dancing. I liked that the performers fell short of perfection, as there was plenty of perfection elsewhere — in the costumes, lighting, music and set design.  (An American in Paris took home Tony Awards for lighting design, scenic design, and orchestrations, as well as choreography). 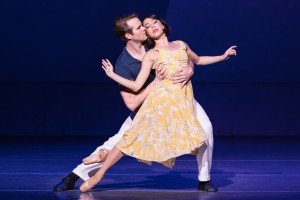 Having seen and loved the movie, Maddox is no Gene Kelly, and Walsh is no Leslie Caron, but that’s unfair. Those are huge shoes to fill! My main quibbles relate to the musical’s emphasis on Nazism and WWII. I’m not sure the musical needed the added weight of war and religion. Nazis didn’t hover over the film’s narrative, and I don’t recall any of the leads being explicitly Jewish, although that may have been due to Hollywood’s insistence on a sanitized version. In the musical, Adam Hochberg, a composer, is purportedly supposed to be a stand-in for George Gershwin, and that makes some sense. In the movie, though, the character was named Adam Cook, and he wasn’t in love with Lise. I understood why Jerry and Henri Baurel (Ben Michael), the rich French rival for Lise’s heart, wanted Lise for themselves. I never understood in the musical, however, what it was that made Adam want her at the same time. One final quibble — the musical implies Henri is gay or bisexual, and that won awkward laughs. I prefer the simplicity of the movie’s characters, even if the drama was rather shallow and character’s true identities may have been hidden. 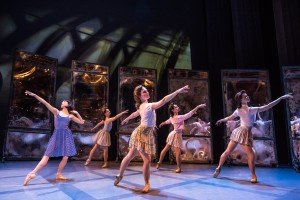 An American in Paris Touring Company, photo by Matthew Murphy

As “‘s wonderful” as Wheeldon’s choreography is, what stuck in my mind is the music. The Gershwin music is catchy and happy, fun and light. I found myself humming it after the performance on the way home, and again in the morning after I woke up. It’s the music from An American in Paris that can stand alone, that makes you want to tap your feet and, well, dance. I Got Rhythm, They Can’t Take That Away From Me, the hits kept coming. Adam has a realization in the musical about the importance of music in cheering up others. I did leave the Kennedy Center feeling cheery. The old-fashioned charm of the music seeps into the entire show. All of it left me smiling.

Although the musical version adds Nazis and recovery from war as major elements, the overall effect is still merriment and sweetness. The message is that art brings joy and hope, and the musical encourages everyone to be true to him or herself and to follow their passions. Wheeldon’s dancers don’t shy away from being cute. The romance between Jerry and Lise is youthful and dreamy, and you root for them, of course, and feel glad when they share a big smooch and romantically dance off into the future together. Like a cup of cocoa on a cold night, An American in Paris warms the soul. The film is a classic, and the musical likewise may become one too.