I haven’t attended or reviewed a dance performance since March 2020. When I was last at the Kennedy Center, I remember laughing because I held out my hand for a shake and then quickly withdrew it, suddenly remembering that the advice was to forego handshakes. I knew then that there was a dangerous contagious virus  spreading around the world, but I had no idea what a huge impact it would have on our lives. I couldn’t have fathomed, nor would I have believed at that time, that I wouldn’t return to the Kennedy Center for the remainder of the season. Indeed, I still have not returned. Yet, I did have an opportunity to enjoy dance at the Kennedy Center again finally, over a year later, via a live streamed performance.

I watched from the comfort of my home a collaboration between jazz pianist Jason Moran, singer-songwriter Gregory Porter, choreographer Alzono King, and ballet dancers Tiler Peck and Roman Mejia. The performance lasted about 50 minutes, and it was like a cup of tea, warm and satisfying. The music choices reflected feelings we have all experienced — longing, fear, renewal. I suspect those feelings may have  intensified for many due to the pandemic. The evening’s performance highlighted these familiar sentiments in a gentle way.

A small in-person audience gathered at the Kennedy Center to watch the performance live. From my seat at home, I avoided crowds and public transportation. I sat cross legged on a floor cushion with a cup of tea and a cat beside me. Not how I typically view dance, but a welcome departure. Among other things, the lighting at home was much better for note taking! 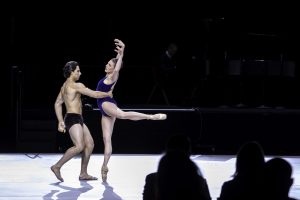 On Stage at the Opera House, An Evening of Jazz and Dance, Tiler Peck and Roman Mejia, photo by Ximena Brunette

Despite the perks of being at home, the online format is not my preferred way to see dance. I assume many dance fans feel similarly. Dance necessarily loses much of its vibrancy when it’s on screen. It’s unavoidable. There’s something so compelling, so magical, about seeing dance while sharing space with performers and audience members alike. In fact, in addition to dancers, I miss my fellow arts patrons a great deal. Sure, the coughs and crinkling programs can be annoying, but there’s something undeniably special about a collective gasp of delight, of being part of an audience that’s transformed and walks out of the theater abuzz with energy.

This jazz and ballet combination didn’t exactly energize me, but again, like a good cup of tea, taking in the contributions of the performers made me feel peaceful and calm. I wonder if others in the at home audience swayed or sang along? Or if anyone else discovered their cat likes jazz music? At any rate, the performance was worthwhile, and I was thankful to have witnessed it. I suppose it was more pleasant than amazing, but that’s ok. I’ve been starved of dance for so long, pleasantness is appreciated!

Renowned choreographer King, Founder and Artistic Director of LINES Ballet, created two works featuring New York City Ballet Principal Dancer Peck — one solo and a duet with fellow NYCB dancer Mejia. It’s always fun for me to see a dancer of such high caliber as Peck try new things, further expanding her talent. She didn’t always exhibit the smoothness I thought she needed, but at points she skillfully melted into the music through King’s choreography. Perhaps with a little more rehearsal time she would be more consistently oozy? For some reason, Mejia looked more fluid to me, while Peck appeared to be deeply concentrating. 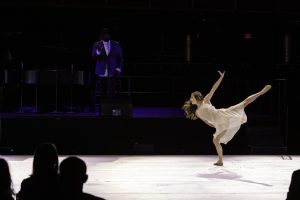 On Stage at the Opera House, An Evening of Jazz and Dance, Tiler Peck and Gregory Porter, photo by Ximena Brunette

In both pieces Peck seemed to wrestle with conflicting emotions. Particularly in the duet with Mejia, she pushed off of him, danced separately from him, and would come back into his orbit like she was pulled by a magnetic force. One vivid image was of Peck and Mejia each moving backwards toward each other, then circling and turning, resulting in an inevitable rejoining of their bodies. Another strong image was of Peck with her arms wrapped around Mejia’s neck shoulders as she swung around.

In her solo, Peck, with a short flowy dress and long flowing hair, occasionally conjured birds. (There was the sound of bird sounds at the start of the piece). With fingertips on her shoulders she rotated her elbows like wings, making loops with her shoulders. Less birdlike but equally quirkily, she later made small circles with flexed hands, her arms stretched out from her side, like she was quickly scrubbing something.

The dance performances were broken up by solo piano by Moran, the Kennedy Center’s Artistic Director for Jazz and piano with vocals by Grammy Award-winning Porter. I’m not a music critic, but I was captivated by Porter’s velvety voice and Moran’s lithe hands flying across the piano keyboard, of which there were many closeups. The camerawork wasn’t perfect. There was a moment of blurred dancing, and I doubt it was purposeful when I glimpsed one of the cameramen on stage. Filming from on stage was an interesting choice. It left a somewhat sad view of rows and rows of empty red seats. Also, the spotlights glowed distractingly like twinkling stars. Was the bluish color of the light a feature of my screen, or was that color by design, complimenting the sometimes bluesy music? 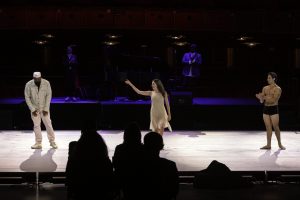 My favorite part of the performance was the end, when the performers stood together and grinned. I could sense the elation the artists felt regarding being able to perform. Smiling genuinely, they clapped for each other as the tiny on-site audience stood clapping for them.

The performance can be viewed on demand for $15 through August 1, 2021, via the Kennedy Center’s website.