I understood that I’d be seeing musicians and dancers sharing the stage in Andersson Dance and Scottish Ensemble’s performance of Goldberg Variations — ternary patterns for insomnia. Watching dancers and musicians in the same space isn’t new to me. To the contrary, I’ve seen this happen quite a bit over the last several years. Musicians are no longer necessarily relegated to the orchestra pit or to a back corner of the stage. Nowadays it’s not at all uncommon to see musicians and dancers interacting on stage. It’s almost natural that performers on the same stage would, at the very least, acknowledge each other. Less common, however, is witnessing musicians actually joining in the dancing along with the dancers, although I’ve seen this before, too.

Andersson Dance’s Swedish choreographer Örjan Andersson has the Scottish Ensemble not just sway with their instruments but sometimes set their instruments aside and dance — slapping the floor, raising their arms, tapping a foot behind them, walking through the space in wide curves and tight turns. I suspect that many in the Kennedy Center’s opening night audience were music fans who may never have seen musicians dancing, especially while performing Bach’s beloved Goldberg Variations! While not all of the musicians looked perfectly comfortably dancing, that’s beside the point. The point, I think, is the joint effort between the dancers and musicians. They create something original, even for those who have heard Goldberg Variations again and again. Observing the musicians step out of their traditional roles and let loose a little is rewarding, and it gives the audience a different perspective from which to enjoy Bach’s music. 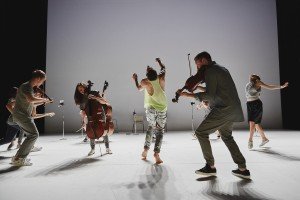 In my case, given my background as a dancer, I usually see movement when I listen to music. It’s satisfying for me to have music and dancing occurring simultaneously in front of me. The two arts of music and dance are obviously closely intertwined, and they relate beautifully to one another. Does Andersson’s choreography enhance Bach’s music? No, not exactly, but it accomplishes something else. Rather than highlighting the intricacies of Bach’s Goldberg Variations, Andersson manipulates the manner in which one listens. The music isn’t illustrated by the choreography; instead, the choreography gives the viewer an opportunity to appreciate the music in a unique way.

The 11 musicians and 5 dancers wear pedestrian clothing — lots of t-shirts and sneakers with a few sparkly shiny pieces. The scrim and surface of the stage are white. In the first variation, a male dancer wags his hips and skips around. Even though I’ve seen musicians on stage moving before, and I knew they would do so in this work, when the musicians began to jump and groove with him, the visual impact of the vigorous shaking was surprising. 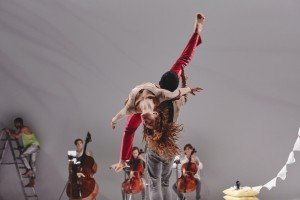 Many of the variations are announced beforehand by a dancer, but many are not. Some of the dancing is done by everyone, at other times there are solos, duets, etc. Props are added — a ladder, bowls, a clothing rack, a cardboard tube, and the dancers and musicians play with them. Like the variations themselves, the performance unfurls such that there are lively powerful moments and quieter, more somber ones. To contrast with lovely liquid lyrical movement, there are silly episodic seizures. There are also interludes of silence, of chatter, and a period when no one is on stage at all.

Highlights include dancers sluggishly wrapping themselves into a sculpture and weaving over and under each other. A dancer falling head first into carefully aligned floor cushions. A musician whose elbow is gently pulled up by a dancer as he finishes a sweeping gesture with the bow of a violin. One dancer blowing an imaginary dart into another, who collapses onto the floor. A couple who endearingly embrace. Musicians dancing by making music with their bodies — snapping, clapping, rubbing, taking a finger into a cheek to produce a popping sound. 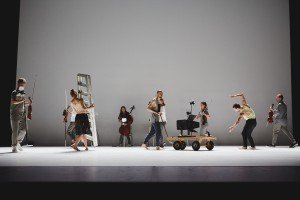 My attention waxed and waned. My guess is the goal of this collaboration isn’t to keep audience members constantly engaged, on the edge of their seats, but to take them on a journey of the sort where they can truly sit back and relax. During the last half of the performance I glanced over to see a gentleman a few seats away from me snoring. I don’t suppose Andersson intended audience members to snore, but somehow I’m not sure that was completely the wrong way to enjoy the performance. Andersson invites people to escape the stiff formality of a typical concert experience, and this man clearly felt at ease enough to catch a short nap.

One certainly could approach Goldberg Variations super intellectually, but that’s not Andersson’s method. He gives us the opposite gift. He introduces fun and everyday movements and objects, which makes listening less of a challenge. In helping the audience to settle into the music, Andersson also sparks curiosity.