Summer usually provides dance critics with an opportunity to see new things. The major professional dance companies generally take a short break, and smaller groups step up to fill the dance programming void. In my case, on a sweltering August evening, I was able to attend a performance by a group called “Area Woman.” As the front of the local performance collective’s recent printed program proclaims, “8 venues, 10 days, 12 shows.” I had a wealth of options and no excuses for not coming out to see one of the shows. 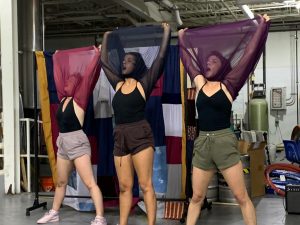 I ended up attending a performance of Area Woman’s Ephemeral Fatale at Right Proper Brewing Company’s Brookland Production House, which is a beer-making facility. That’s right, a brewery, not exactly a traditional venue for dance. In an open space with a tall ceiling and huge shiny fermentation tanks in the background, Area Woman toyed with its audience, who sat on benches marking the edges of a stage. Three women (Claire Alrich, Sarah Greenbaum, and Sadie Leigh) danced, while a fourth woman, Meg Lowey, provided live musical accompaniment (a lot of repetitive sweet-sounding recorded loops and percussive taps to which she added catchy, cooing vocals).

At first, the dancers, in layered multi-purpose costumes designed by Alrich (gauzy tops became dresses and then scarf-like wraps), bounded around. Because the women wore lilac-colored high top sneakers, I was reminded somewhat of Jazzercise and other 1980s aerobic dance craze trends. The women of Area Woman are young, though, so they wouldn’t have worn those now retro Reebok shoes when they first hit the market. While swinging, trotting, and dashing through the space, the dancers traded flirty, knowing glances. Through their energy and their eyes, the dancers seemed to be communicating secrets among themselves. However, they didn’t seek to exclude the audience, they enticed the audience to examine what was happening. 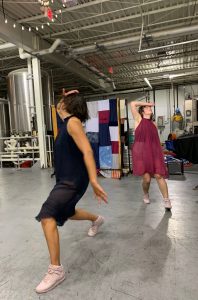 The dancers, throughout the performance, were obviously intent on being watched and watching each other. They were also intent on breaking down walls, which was refreshing in light of all the political talk about walls lately. The dancers quite literally put up and took down walls comprised of grandmotherly patchwork curtains designed by Alrich. They paraded the curtains like proud militaristic banners, they briefly shifted them into the laps of audience members, they hid behind the curtains, they arranged the curtains and snapped them together to form an enclosed cube inside of which they danced. Finally, they opened the curtained walls and invited the audience to join them on the other side. No doubt there was significant symbolism at play.

One of the things an intimate performance space with U-shaped seating allows is a clear view of the faces of other patrons (as long as the lights are bright, and they were). Honestly, sometimes it’s almost as fun watching the reactions of audience members as it is watching the dancers’ expressions. I thoroughly enjoyed witnessing what was taking place all around me, especially the transformation of the audience when beckoned to stand up and approach the curtained cube. Faces that earlier had seemed befuddled suddenly wore inquisitive smiles. Alrich’s clever curtains had flaps that could be lifted to afford a view of the cube’s interior. Thus, we could peek at dancers with filmy fabric pulled over their faces revolving in pugilistic knots. As the audience jockeyed for access to different points on the curtained exterior to catch a glimpse, the picture inside was constantly changing. 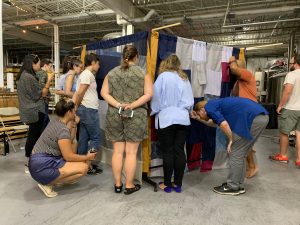 Faces again lit up when at the conclusion of the performance the performers presented a champagne toast and puppet show. Audience members were treated to tiny cups of champagne or water (yes, ironically champagne was the alcohol that was poured, even though the performance was in a brewery). In a celebratory mood, the dancers opened a gift-wrapped box, which unfolded to form a small scale version of their patchwork curtained stage. From another box emerged wisps of a familiar filmy fabric hanging from delicate strings. Lowey twirled the fabric about to mimic the dancers themselves. I appreciated one man’s hearty guffaws when he understood the self-referential nature of the miniature set and puppets. 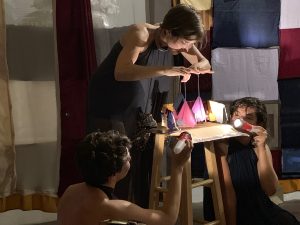 I’m not aware of what goals Area Woman had for their production of Ephemeral Fatale, but if one of the goals was to shake up the “normal” course of a dance performance then I think the group found success. I can imagine the performers thought a great deal about how to connect with an audience in new ways. Hopefully, getting the audience to interact closely with them (including, at one point, engaging in conversation with the dancers as they grabbed water bottles they had stashed underneath the benches for a hydration break) reaped some rewards. I frequently find that people who are unacquainted with contemporary dance are wary of it and may feel intimidated. By breaking down walls in the manner they did, Area Woman contributed a more relaxed, if unconventional, way to savor a dance performance (and the bonus sharing of champagne sure didn’t hurt). Furthermore, by performing at different venues, Area Woman helped highlight unique performance spaces in DC. I had not been there before, but now I plan to return to Right Proper Brewing Company’s Production House. I would love to see more performances there in the future.