Ariel Rivka Dance (“ARD”) returned to New York Live Arts last week for the fourth consecutive year, and the company’s eleventh anniversary, joined by Amy Marshall Dance Company.  The program highlighted women choreographers, focused on women’s issues or points of view, and presented primarily women dancers. The result was an interesting program that could appeal to any audience. 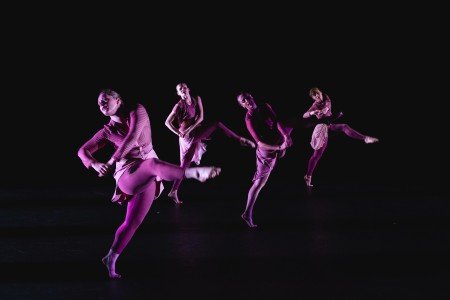 As described in the program and as supplemented by advance explanations before the piece began, there should have been no reason for me to find She as compelling as I did. What the audience was told was that the musical accompaniment for She was the sound of a breast pump (Grossman having been inspired by the recent birth of her second child). I don’t know what a breast pump sounds like, but I have confirmation of the sound’s accuracy from a brief conversation with the composer (Stefania de Kenessey), who happened to be seated next to me. While the relentless breast pump sounds drive the composition and the dance, both go way beyond that. 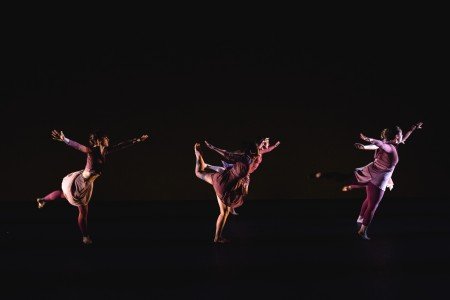 She is an abstract dance, with little movement that makes obvious narrative sense. But what Grossman appears to be doing through the virtually non-stop, frenetic, repetitive, hysterical (yes, I use the word advisedly) action depicted, to de Kenessey’s score (which uses the breast-pump sound as both a relentless “home base” and a point of departure), is not at all an effort to visualize the activity referenced, but the much more serious subjects of body ownership, fullness and emptiness, possession and abandonment, and looming over it all, postpartum depression.

Describing the action has the effect of simplifying it – it’s actually quite complex, but repetitive – intentionally.  One dancer is seen examining her belly, and soon thereafter the sound of the breast pump begins. Suddenly, all five women in the cast (ARD is an all-woman company) individually, but essentially concurrently, explode out of the right stage wings, racing horizontally to stage left (picture lanes in a track race), and then one or more of them, display violent images of what I saw as absence and loss – and mental anguish and struggle – after which the process is repeated. Relentlessly. Like the breast pump sound. The result is more than deja vu – it’s a psychological and emotional Groundhog Day. The sense of abandonment, of loss; the vision of the agonized women seemingly concurrently thrusting arms out and up, and pulling them back in (as if almost simultaneously trying to get rid of the source of the pain and to push things back the way they were), propelled forward by equally relentless windmill arms, is not so much numbing in repetition, but contagious in its impact. For a “simple” sounding dance to the music of a breast pump, She, and its cast, deliver so much more (and yes, I used the word “deliver” advisedly as well). Cassandra Bowser, Casie Marie O’Kane, Kyleigh Sackandy, Danita Shaheen, and Hana Ginsburg Tirosh comprised the vividly expressive cast. 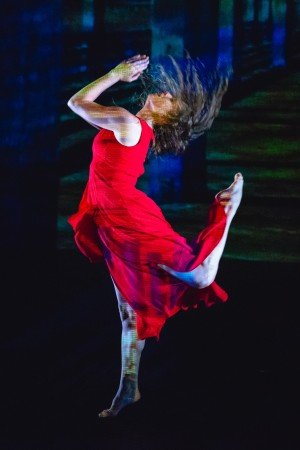 For Her, a solo for Kristin Licata, isn’t as successful. Not because the choreography or execution are in any way deficient, but because if there was a purpose behind it (beyond showing Licata, outfitted in a relatively fancy-looking dress that made her look like a moving rose in what seemed like some sort of triumphant reverie), I couldn’t discern it. And the setting made the piece, to me, incomprehensible. What appeared at first to a projected, romanticized image of columns (modern, not Greco/Roman) – seen through somewhat of a haze, morphed into painted columns underlying an overhead road or elevated train tracks. I thought of a rose in Spanish Harlem – under the “el” and romanticized –  but that didn’t make any thematic sense. So other than visualizing a triumphant, almost regal-looking woman (Licata did a fine job being expansive in the relatively confined movement space) moving gently, lyrically, and confidently (no hysteria here) to the equally gentle and lyrical score by David Homan (Grossman’s husband and the company’s Executive Director/ Composer), For Her, undermined by its inscrutable set, didn’t work for me. 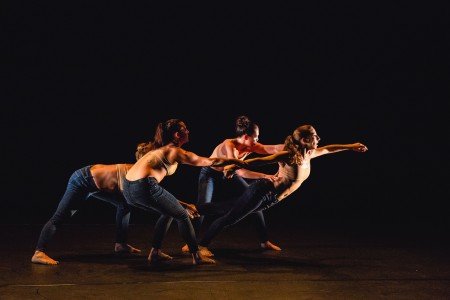 At last September’s NYLA program, ARD including a piece by DaSilva, performed by her own group of dancers, which I admired a great deal. Called Susan, it featured African rhythms, a consuming subject (although I couldn’t pinpoint exactly what that was), and feverish, albeit disciplined execution. Necessary Evil has the same qualities, but instead of African rhythms, it is choreographed to songs (“Little Girl Blue” and “I Loves You Porgy”) with an African-American edge – sung by Nina Simone. As was the case with Susan, I still have difficulty pinpointing the dance’s subject, but DaSilva’s choreography – this time set on ARD dancers – remains compelling. 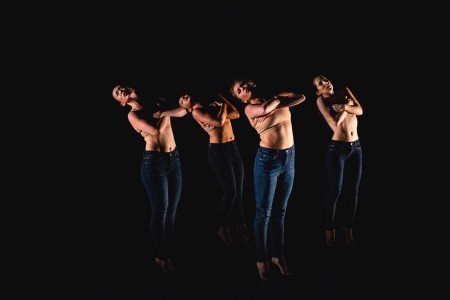 The dance is divided into two parts, corresponding to the two songs, and the four women (Allie Kronick, Casson, Licata, and Torosh), and it quietly seethes with frustration and despair, and ultimately, what seemed to me to be reluctant acceptance. The choreography is less “wild” looking than in her previous piece, but the level of intensity is the same. If I had to guess its subject (assuming there is one, and I believe there is), based on the title, I surmise that it’s about men being a “necessary evil,” but I can’t be certain, and in this rare situation, the purpose matters less than the intensity of DaSilva’s choreography and the dancers’ execution of it.

At each of her recent NYLA programs, Grossman invited at least one choreographer and/or company with an already demonstrated level of accomplishment to complement her pieces on the program. It’s somewhat dangerous for an emerging choreographer to do, but it enhances the program by injecting another style and/or viewpoint. This year, that other company was Amy Marshall Dance Company, and Marshall’s pieces provided a refreshing change of pace without negatively influencing an appreciation of Grossman’s (or DaSilva’s) work. 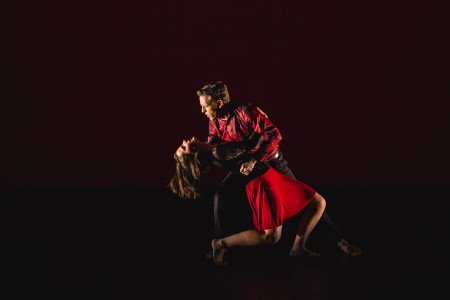 Marshall’s company (“AMDC”), which she established in 2000 with Executive Director (and dancer) Chad Levy, based on the dances on this program, emphasizes an uncomplicated but complex and classic lyricism, a desire to entertain as well as educate or convince, and cultural/musical awareness. The program note indicates that Marshall’s intent is to “realize a vision of dance theater as a visual metaphor for the human spirit,” and she succeeds. And it doesn’t surprise me that these are characteristics she shares with Paul Taylor and David Parsons, with whose companies the program notes indicate she performed. 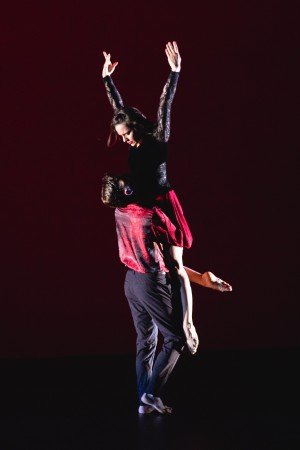 A few weeks ago I attended a program that included a dance choreographed to music by Jacques Brel, and wondered when someone would choreograph a dance to the late 1960s off-Broadway review, Jacques Brel is Alive and Will and Living in Paris. So the first of AMDC’s dances on this program, which she choreographed in 2014, was Ne Me Quitte Pas, as recorded by Ereni Sevasti from an off-Broadway revival of the show in 2006 (in the show’s original off-Broadway incarnation, to my recollection it was sung by Elly Stone). [The song may be recognizable by its English version, “If You Go Away,” which lost a lot in translation.] Obviously my idea isn’t original or unique. But I digress.

Marshall’s choreographic adaptation is a pas de deux for Levy and Alyssa Wiedman, which captures the essence of Brel’s song, it’s passion and heartbreak, in the context of a difficult visualized relationship that’s intense but gradually coming apart. Enhanced by the costumes by Meredith Van Scoy, with the positions of the black and red/burgundy colors reversed from one dancer to the other, the dance is well-choreographed and performed, and agonizingly lovely to watch. 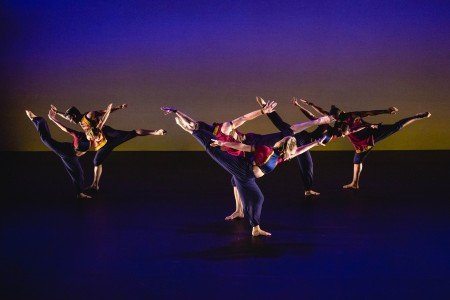 Shakambhari, which Marshall created in 2015, is inspired by the Hindu goddess of that name. As described in the program note, the story relates how Shakambhari, “divine mother and The Bearer of the Greens,” saved herself and the town from a drought caused by the Demon, Durgamasur by defeating him with five arrows, thereby lifting the curse. As Marshall choreographs it, it’s far more entertaining than a rain dance. With a cast of thousands (ten dancers) and with colorful costumes created by Van Scoy that essentially seem to divide the dancers into the two gods, the goddess’s supportive allies (maybe personifications of the five arrows; I’m not sure), and townsfolk, the dance is great fun to watch. Authenticity isn’t the issue here – this isn’t so much Indian dance as choreography that reflects the spirit of Indian dance. Nor is there a sense of “purpose” beyond telling a story. But neither authenticity nor purpose is the point – this is simply another well-crafted and executed dance meant to be entertaining – and it is. Julia Neto as Shakambhari and Levy as Durgamasur led the cast (Lisa Borres, Caitlin Sheppard, Jillian Foley, Kevin Williams, Parker Herren, Megan Guinta, Wynne Huo, and Wiedman), each of whom seemed to be having as much fun as the audience. 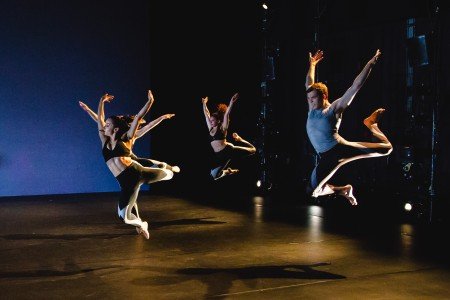 Marshall’s last piece on the program, No Exit (2005), is another highly accomplished dance (to unidentified music by Lynn Glassock and the Interlochen Percussion Ensemble), filled with frenzied and constant movement, including impressive lifts and jumps, but it left no lasting impression beyond being impressive. My notes reflect that some of the dancers looked like jumping animals, so maybe that and the percussive music reflects a degree of confinement as to which there is “no exit,” but I couldn’t be certain. Again, however, the movement is what made No Exit interesting, not whatever specific subject the dance may have had. 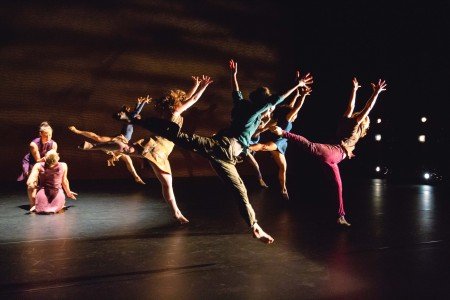 The evening concluded a repeat performance of Grossman’s No Words. As I described in my review following its premiere in September, No Words is a searing dance of female anger and empowerment, at once anger-provoking, heartbreaking, and inspiring, and to me, Grossman’s best work to date.