For its 9th anniversary, Ariel Rivka Dance celebrated with a four performance series at New York Live Arts. As she did for the company’s anniversary a year ago, Artistic Director and Choreographer Ariel Rebecca Grossman invited three other choreographers, two with companies of their own, to participate: Heidi Latsky, Elisa King, and Pascal Rioult. It turned out to be a wonderful, and wonderfully diverse, program of contemporary dance.

Initially, I must note that while its contribution to the program was significant, including in this review the two pieces choreographed by Rioult and danced by his company, RIOULT Dance NY, seems somewhat unfair. Bolero and Wien, the first choreographed in 2002, the second in 1995, are established successes. Dancing recognized pieces doesn’t guarantee good performances, but these were very good. The other pieces on the program held their own, but these were on another level. I’ll address them briefly later in this review. 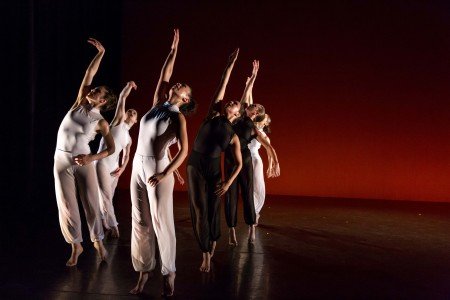 I’ve watched Grossman’s choreography over the past few years, and at least based on those pieces I’ve seen, I’ve observed it evolve. Last year’s Ori, for example, was an improvement over previous pieces I’d seen, and I noted in my subsequent review that although the choreography was similar to her earlier dances, I sensed that Ori, though abstract, nevertheless looked more focused.

In a brief pre-performance discussion (I did not take notes, so my references may not be exact), Grossman mentioned that she preferred to choreograph a piece without conceptual boundaries, because not having boundaries allowed her the greatest artistic freedom. The other choreographers on the program took the opposite position – that having limitations and boundaries created freedom. Grossman’s husband, composer David Homan, who creates or arranges the music to which Grossman choreographs, suggested that a conceptual boundary was a good idea. Toward the end of the discussion, Grossman said jokingly: “I guess you’re saying that I should listen to my husband.”

I’ll not comment on that statement. But although I can’t say that having a greater sense of conceptual limitation resulted in a better choreographic product, Variations on a Box, an example of a concept piece with certain boundaries (in this case, literal boundaries), is the finest work that Grossman has produced to date and an achievement that should raise her choreographic profile. 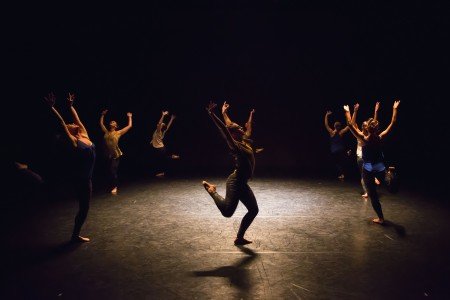 The abstract dance, which closed the program, is what it says it is: variations on the theme of a ‘box’. But while nominally committed to utilizing a box shape – whether provided by the dancers’ relative positions or imposed on them by overhead light projected onto the stage floor – as a starting and ending structure and always returning to it (somewhat like the shifting viewing boundaries of a kaleidoscope), it’s not an orthodox boundary. The ‘box’ reference points come in different shapes and sizes (at times not being clearly delineated), shift and look different from one moment to the next, and seem to disappear as soon as one realizes that the dancers, eight women, have been arrayed in that position. Most significantly, the ‘boundaries’ are porous – the dancers are not arrayed in static lines or postures: they break apart into small groups or individuals, and at a critical point in the dance where the choreographer had to switch visual gears or risk appearing repetitious, they reassemble in a circle – a round box.

Of course the dance’s architecture is only part of what provides visual stimulation. Grossman’s choreography, though variations on a theme and clearly containing Grossman choreographic signposts (for example, bodies lifted up with arms overhead, then crashing toward the stage floor), never look dull or tedious. On the contrary, it’s a joyous piece to watch. 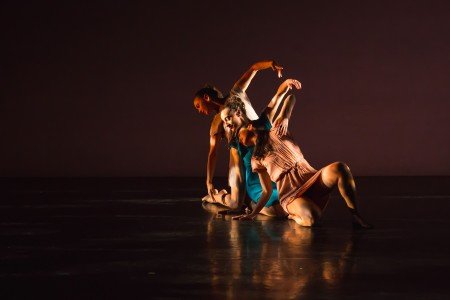 And joy was a continuing theme throughout the pieces that Grossman choreographed.

I was surprised to learn that Leonard Cohen’s Hallelujah was first released in 1984 – it seems to have been in the air considerably longer than that (I think of it in the same memory cell as his Suzanne – which was first recorded in 1966, and which I suppose dates me), and it has reached a new generation of listeners since being used in the 2001 film, Shrek. It’s is a song of spirituality, sensuality, and soothing serenity. It also makes a great lullaby. Homan, who arranged the song for this dance, stated that their baby daughter loved the song. Not surprisingly, the girl has good musical taste.

The dance that Grossman has created for five of her dancers, Hallelujah Eva, was choreographed for their daughter, and reflects the gentleness of its inspiration.

Beatrice’s Rainbow is a companion piece of sorts, choreographed to Homan’s arrangement of Israel Kamakawiwo’ele’s iteration of the Arlen/Harburg song from The Wizard of Oz, Somewhere (Over the Rainbow). When I first heard Kamakawiwo’ele’s version, in the film 50 First Dates, I thought it would make a great accompaniment to a romantic ballet duet. Beatrice’s Rainbow isn’t that. But it’s a love song of a different sort, one that Grossman and Homan apparently conceived to reflect the joy their daughter has given them. It’s a simple dance of bliss for three of her company’s dancers, Kristin Licata, Danita Shaheen, and Hana Ginsburg Tirosh, all company veterans.

These dances may have limited choreographic value, and are considerably less complex than Variations on a Box, but they have immeasurable emotional value – and there’s a place for that in public performances too.

A reprise of Grossman’s Ori, which I’ve previously reviewed, opened the program. 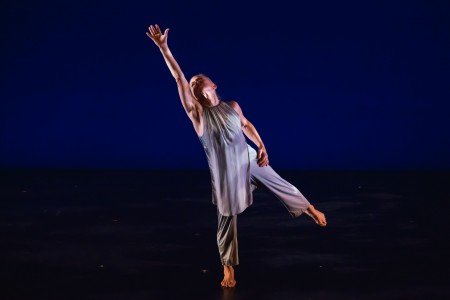 Elisa King has a lengthy history of distinction as a modern dancer, choreographer, and teacher: she’s been performing since 1972. Her solo, Sky Blue, was for me the evening’s biggest surprise. To music composed by Maria Schneider, King delivers a sparkling display of modern dance lyrical virtuosity and visual variety as she, seemingly concurrently, utilizes the entire stage or reduces her positioning to just one piece of it. Not unusual for such solos, King appears to be searching for, or remembering…something or someone (the piece is dedicated to the memory of her brother). But the specific inspiration doesn’t matter – Sky Blue was executed very well, and was pleasing to watch.

Heidi Latsky’s dance Timestamp was represented by three separate dances, excerpts from the entire piece, presented individually during three of the four performances. The one I saw was Timestamp #1, featuring two dancers from Heidi Latsky Dance: Khaleah London and Jillian Hollis. To music by Chris Brierley, Latsky has her dancers stand next to each other at center stage, facing the audience. With feet firmly planted, the dancers bodies move in a ritualistic and intentionally repetitive ways as they swing their torsos, legs and arms to the increasingly feverish tempo of the music, and seemingly with each ‘uptick’ in the pace of Brierley’s score, Latsky adds another ingredient to the repeated movement. The result is a mesmerizing display of mental and physical control that lasts just long enough for the dancers, and the audience, to avoid succumbing to exhaustion. Timestamp #1 appears similar, if not identical, to the piece Latsky danced at her company’s performance at NYU’s Skirball Center last November, titled Solo 1, except it’s now performed by a pair of dancers (and to my recollection the solo version had greater head movement – although that may have been a consequence of Latsky having long hair). I enjoyed it both ways.

In my review of Solo 1, I commented that Brierley’s score, and Latsky’s choreography to it, brought to mind Maurice Ravel’s Bolero. That reference point holds for Timestamp #1 as well. And, curiously, on this same program Pascal Rioult presented his Bolero. 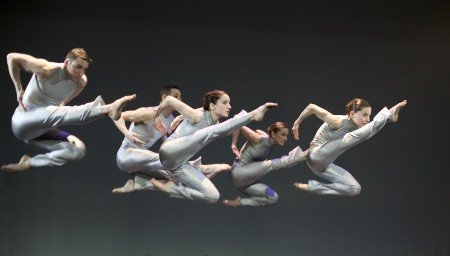 Bolero, the music, is so familiar, and so frequently utilized in dance, that additional creations choreographed to it seem, if not reactionary, than simply trite and passé. Rioult’s piece is a reminder that the score isn’t, and that choreography to it needn’t be. While most of the eight exceptional company dancers executed Rioult’s angular, repetitive gestures (e.g., arms repeatedly thrust out and in and across fairly rigid bodies) in time with the music’s rhythm, one dancer is singled out to dance to the score’s melody. Each time the pitch or pace changes, this dancer returns to the assembled mass, and another dancer replaces the prior one to dance to the melody.  The choreography for the melodic dances reflects a more liquid movement quality, often including deep, lengthy arabesques, and is considerably different both from the groups regimented rhythmic movement, and from one of the featured dancers to another. And like the score, the choreography comes to a brilliant visual crescendo at its conclusion. 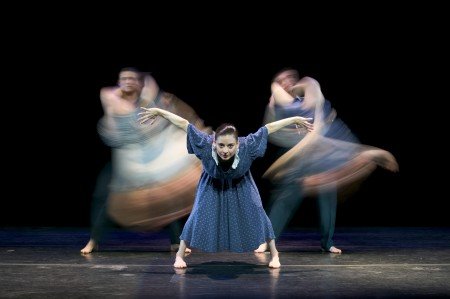 Wien is choreographed to Ravel’s La Valse – the music used by George Balanchine in his ballet of the same name. Although I appreciate the Balanchine ballet, its visual connection to decaying Vienna, and the supposed fading of the waltz dance form as metaphor for a fading empire, is somewhat muddy. Nothing is muddy in Rioult’s Wien. The atmospheric decay hangs over the stage like a thick fog, as the dancers act out, choreographically, often in the form of frantic eroticism, the increasing moral and emotional deterioration surrounding them. The difference between the decay portrayed here and, say, that portrayed in such works as Cabaret, is one of class: Vienna was (and still is) a city of culture, and the expression of this decay in Rioult’s piece is considerably more subdued and sophisticated, though equally virulent, than that displayed in Cabaret. The five dancers, Catherine Cooch, Brian Flynn, Charis Haines, Michael Spencer Phillips, and Sara Elizabeth Seger, perfectly embodied the sense of frantic, inevitable, moral collapse.

Based on this year’s anniversary celebration, as well as last year’s, I look forward to the quality and variety that I anticipate will be presented for Ariel Rivka Dance’s 10th anniversary.