Cut to the chase: the program that The Ashley Bouder Project presented at Symphony Space on Manhattan’s Upper West Side was memorable in virtually every respect, and one of the finer dance programs I’ve seen. The only thing regrettable about it is that unless some angel decides to fund another round of performances, the engagement was two nights only, and ended with the performance I saw Saturday night.

Ashley Bouder is a highly respected New York City Ballet principal dancer not heretofore known for her choreographic talent.  My understanding is that although she founded her company in 2014 to promote the efforts of female dancers and choreographers, the piece she created for this program is her first major choreographic project. Regardless, with this year’s program Bouder indisputably joins the ranks not only of stellar dancers who form their own pick-up groups of friends and colleagues to perform during their “regular” companies’ off-season, but also of those stellar dancers who choreograph very well. 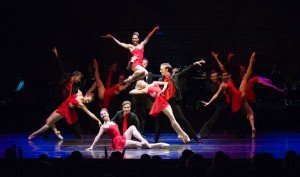 The program also was very well curated. In addition to choreographing her own piece, Bouder performed in a contemporary dance that was so brilliantly crafted I forgot my usual prejudice against the dance’s style (explanation to follow), and she and her ensemble ended the program with a delightful rendering of Susan Stroman’s delightful Blossom Got Kissed.

In Pursuit Of is one of those rare concept pieces that succeeds on levels far beyond its initial concept. It’s not perfect – I observed some awkward-looking partnering, for example, but noticing this was a product of being closer to the stage than usual so I could easily see the seams, and it’s a minor quibble. In Pursuit Of is an outstanding piece of work. Also an outstanding piece of work is Hazama’s accompanying composition. It’s fabulous, and would stand on its own even without knowing that it was the product of an ongoing collaboration with the choreographer. It’s jazzy and outdoorsy and intimate and cinematic: I know there’s no connection, but listening to it made me think of a jazzy Aaron Copland. It’s a thrilling piece of music to just close your eyes and listen to – but if you closed your eyes you’d miss its reason for being.

In accompanying program notes, Bouder explains that the piece, in four individually titled “movements, ” is based on cultural dances by the Masai tribe of Kenya (“Warrior”), Polish Mazurek dancing (“Harvest”), Sufi dance (“Ceremony”), and on contemporary dance (“Freedom”), all integrated into, essentially, a ballet framework. Bouder also explains how she collaborated closely with Hazama, who is Jazzharmonic’s Associate Director, during the score’s creation. The result is a miraculous synergy of music and dance that does exactly what the choreographer apparently wanted: to show the inspirations underlying the movement themes, but to not be bound by them, and in the process to create a unity from diversity, pushing cultural barriers aside (perhaps literally symbolized by pushing some of the dancers to the stage floor, a recurring sequence that ultimately forms the dance’s final image). 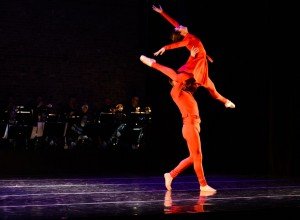 To me, the most compelling segment is the pas de deux based on Sufi “whirling dervish” movement, superbly executed by Hod and Alberda. It’s consistently intriguing, constantly mesmerizing, and not at all limited to whirling motion. On the contrary, Bouder plays with the whirling movement (primarily executed by Hod), breaking it into components, and restructuring it in seemingly infinite ways to create an independent dance rather than an homage. It’s simply gorgeous, and could, if Bouder wanted to do it, be performed independently of the piece as a whole.

But as one facet of this delightful piece, one wouldn’t want to carve it out separately. Indeed, the dance is so well structured that the Hod/Alberta pairing is highlighted from the beginning, although integrated. They’re the focus, leading to the pas de deux. It all flows naturally. 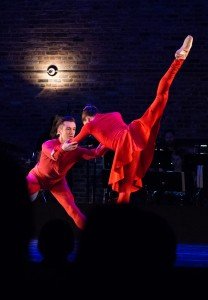 The Warrior segment, based on Masai jumping, clearly has the dancers, usually but not rigidly paired (Woodward and Kayali, Habony and Hoxha, in addition to Hod and Alberda), leaping like…Masai ballet dancers (the universality of distinguishable movement), but way more than that. The segment is skillfully divvied into sections focusing on one couple or another, multiple variations of partners, and solos.

This pattern is repeated in the second movement, based on Polish Mazurek (Mazurka) dance, but differently, and without the leaping. Instead, there is glorious partnering, including a stunning duet for Woodward and Kayali, and, in solos, fancy footwork from Kayali and Hoxha.

In addition to its choreographic and musical virtues, In Pursuit Of is also graced with quality production values. The costumes, vibrant eye candy in multiple colors, each with irregular lines of what appear to be complimentary iridescent fabric, enhance the jazzy, modern, unity-amid-diversity concept. And the lush red/burgundy outfits for Hod and Alberda are particularly vivid. The costumes were designed by the estimable William Ivey Long. And the orchestra, spread horizontally across the stage’s bricked back wall (out of the way but never out of sight) – with Hazama conducting – provided its own unified multi-cultural contribution. 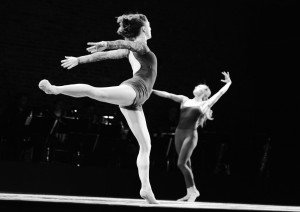 I must confess that although I’ve heard of Liz Gerring, I’d never previously seen her work. Duet was a fine introduction.

Duet is a dance for two women – and with dancers the caliber of Bouder and Mearns (who rarely appear together in any one piece), one would expect nothing less than brilliance. But when the piece began, all I saw was two women moving separately, angularly, with occasional outstretched arms and legs (stretched in different directions), circling each other as if not aware of the other’s existence. It was certainly cerebral, but with no bang for the intellectual buck. Yet more alienating to me was Webber’s composition, which, although played by five members of the Jazzharmonic (including Webber), sounded like…well, like instruments circling each other as if not aware of the others’ existence. Much of it sounded “Cage”y, like body sounds usually heard in private. But I suppose if you’re into that sound, it may have been a superb example of it. 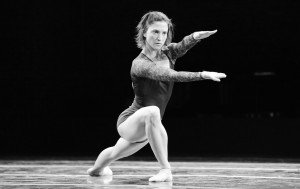 And then, notwithstanding the score, Duet clicked. I can’t say exactly how or when, but Gerring’s choreography, even though it didn’t “go anywhere,” became exciting to watch. The unconnected, disconnected movement became connected – occasionally the pair danced in sync or sequence, but mostly contrarily – until you realize that the synchronization and sequencing happen in ways you’ve not previously seen. Gerring somehow managed to rely on the music for a framework but also, much of the time, to have the dancers move independently of it, to her dance’s own internal physical metronome. There was no emotion, but Bouder and Mearns nevertheless made the movement not only impeccably executed, but passionate. Thinking about the movement and the direction and the changing angles and thrusts became like watching major surgery on stage air space, or a choreographed version of a successful solution to a Chinese puzzle. Oddly smashing. 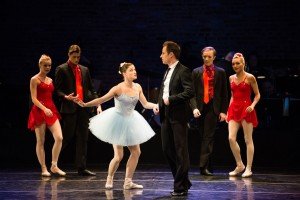 After the rigors of In Pursuit Of and Duet, Stroman’s Blossom Got Kissed was an escapist delight. Pure Broadway ballet; pure fun. Bouder (who is also credited with designing the piece’s costumes) is known for her technical brilliance, but doesn’t often come across, or have the opportunity to come across, as engaging. But as Blossom, Bouder was at her engaging best, never over-acting, but never under-acting either; and her execution was sublime. Veyette’s The Musician had to be understated perfection, and was. And the remainder of the twelve dancer cast (the entire group, except for Mearns) danced to the occasion. I was particularly impressed, again, by Woodward and Kayali, individually and together, but also with MacKinnon and Sanz, Hoxha, Miller…and I finally got to see Habony, who often looks deeply pensive, crack what appeared to be a legitimate smile. A lot of them. As, clearly, did the rest of the Symphony Space audience. I, and it appeared the near sell-out house, left the theater flying.