The Ashley Bouder Project returned to the Joyce Theater on Monday, as part of the Joyce’s Ballet Festival, with a program of five dances to further its mission “dedicated to furthering the inclusion of women and marginalized people in leadership roles in the performing arts world.” The program did exactly that – almost, but not quite, to the point of being overly didactic.

Two of the dances, Duet and In Pursuit Of … , were repeats from last year’s program at Symphony Space (although Duet was cast differently), and there were three world premieres: Lauren Lovette’s solo for Bouder: Red Spotted Purple; Alas-, an ensemble piece choreographed and composed (in part) by Abdul Latif; and Annabelle Lopez-Ochoa’s Symbiotic Twin. The three premiere pieces overshadowed the others, notwithstanding that I had reviewed them favorably last year, and each was accompanied by live music performed on an upstage platform by New York Jazzharmonic, under the direction of Ron Wasserman. 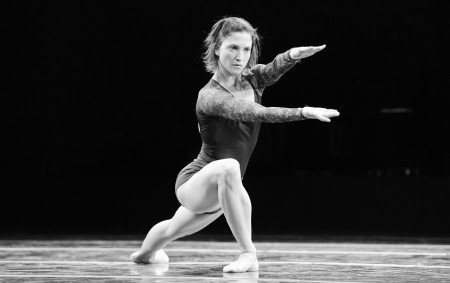 I’ve written previously that, with not infrequent exceptions, I’m not particularly enamored of solo dances: I prefer the greater visual and emotional variety that choreography for, and execution by, more than one performer might provide. Red Spotted Purple is one of the exceptions: it’s a little bundle of joy.

The piece’s music, composed by Stephanie Ann Boyd, is light and frothy, and Lovette’s choreography for her fellow New York City Ballet principal dancer reflects that. I don’t know if the title has any significance, but that doesn’t really matter – what the music and choreography both have is combined spirit that, together with Bouder’s execution, is irresistible. [Without anything more than the words to go by, unless they’re taken out of thin air or relate to a species of frog that I haven’t heard of, my hypothesis is that they reflect the emotional and physical tenor of the three movements (the first vibrant; the second slow and variable; and the third richly textured).]

According to the program note, the solo “plays with the idea of an inner battle between a dancer’s physical person and the music that drives her feet to dance.” I didn’t get the inner battle in the first two movements – “just” movement reflecting the music – but I did, clearly, in the third movement in which Bouder’s body and feet and mind seemed to be pulling in disparate directions concurrently, but somehow as a unity.

The concept of the physical person responding to music isn’t exactly new. But this dance isn’t simply a visualization of “I’ve got the music in me.” It’s complex movement that’s much more complicated than it looks, comprised primarily of rapid-fire and off-balance and directional-change transitions that both visualize and enhance the music, and which deliver an overall sense of pure unadulterated happiness. And Lovette, who has, to my knowledge, created four pieces to date, shows increasing skill as a choreographer. For a relative novice, all three that I’ve seen are choreographed with care and an awareness of space and time and emotional nuance thoroughly appropriate for the context in which they’re placed.

Bouder appeared to be having a blast dancing Red Spotted Purple, and the feeling was contagious. It was a great opening to the program. And Lovette’s appearance during the curtain call was as much fun to watch as the dance itself – she knows how to bow after she’s performed, but seemingly has no idea what to do when she’s taking a bow as “just” a choreographer: arms and legs percolating as she seemed to try to figure out what she was supposed to do next. It was a guileless impromptu post-performance performance, and it cemented her reputation as one of the most endearing persons on the New York stage. 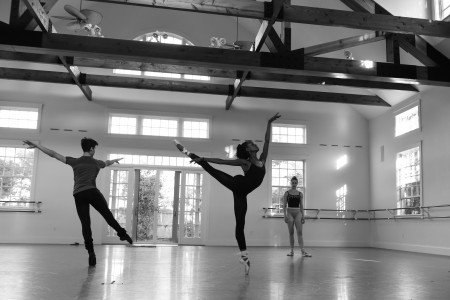 Although Latif is not an unknown quantity to those intimately involved in dance, to those not tuned into everything one might be tuned into in the dance world, and I consider myself among them, his name is not familiar. That might change as a result of Alas-.

Alas- is a strange name for a dance, or anything else. The word is used to express sadness or regret, and used here, in combination with a hyphen, denotes that “something” is to follow that expression (alas and alack; alas poor Yorick, alas if only…) But that analysis is not at all helpful to understand Latif’s dance, so, alas, I’ll leave it as something that simply “is,” and move on. [A program note indicates that that the piece is dedicated to a woman who aided Latif to get to where he now is.]

I disliked Alas- at first, but grew to appreciate it more as the dance (and Latif’s performance) progressed. The piece, apparently (the program isn’t clear) a mishmash of music that includes Max Richter’s recomposition of Vivaldi’s Spring and unidentified music by Henry Purcell, Wasserman, and Latif himself, is formally divided into five movements: a solo, pas de deux, pas de trois, and concludes with two movements that feature the full cast of six. It’s an ambitious, difficult piece to get one’s intellectual arms around (even though it’s not particularly complicated). And Latif’s description of it as “an ode to the alpha and omega power possessed within the sea,” and “a tribute to our perception of the many facets of the divine” is not at all helpful.

Except for the part of the piece in which Richter’s Spring sprung, I couldn’t tell what was what. Regardless of its genesis or pedigree, however, the music was enjoyable and jazzy melodic.

But then there were the vocalizations. Soon after the music began to be played, I heard sounds that didn’t appear to come from a known instrument, delivered in a relatively low decibel monotonic phrasing. I found this to be especially annoying – it detracted both from the instrumental music being played and the dancing of the initial solo being performed by NYCB’s Claire Kretzschmar. And then I saw a figure who I later determined was Latif sitting atop, and at the center of, the platform upon which the orchestra was arrayed, mouthing the sounds I’d heard.

Eventually, I came to recognize that these sounds were the rough equivalent of scat singing – vocal improvisation (but not purposeless) of nonsense words or non-words (as opposed, for example, to Cage-like sounds that replicate body functions, or doo-wop). It’s not unusual in a jazz setting – Ella Fitzgerald was well-known for her mellifluous wordless sounds which complemented her vocalizations. But what was being done here wasn’t “music” in the sense of melodic sound-words, but relatively monochromatic vocal expressions differentiated by the particular vowel sound rather than by overall tone. It was, to a large extent (but not exclusively), the rhythm to the orchestral melodies. The descriptive phrase that came to mind as I listened to it was “rap scat.”

Gradually, however, the vocalization quality seemed to change – or I got more used to it – and I heard more of a variety of tone and texture in the scat. And these sounds transitioned into something that I not only was no longer trying to tune out, but that I paid attention to because they added unusual texture to the overall musical ambiance.

This “hip-hop scat,” if you will, made the choreography come alive as well. While I thought that the initial solo, as well-performed by Kretzschmar as it was, was scattershot (pun intentional) and one-dimensional, the balance of the dance took on the added texture provided by the scat. And suddenly the choreography, while not looking particularly complex, looked vibrant albeit somewhat irrationally exuberant and unkempt – but that was in keeping with the spirit of the piece as a whole and the “beat” provided by the scat. Most impressive to me was the choreography and execution in the second movement pas de deux performed by NYCB dancers Olivia MacKinnon and Roman Mejia, the thoroughly pumped pas de trois with India Bradley (a NYCB apprentice who appeared in several programs I saw last season), Devin Alberda (a member of NYCB’s corps), and Damien Johnson (trained at NYCB’s affiliated School of American Ballet), and the piece’s final movement. 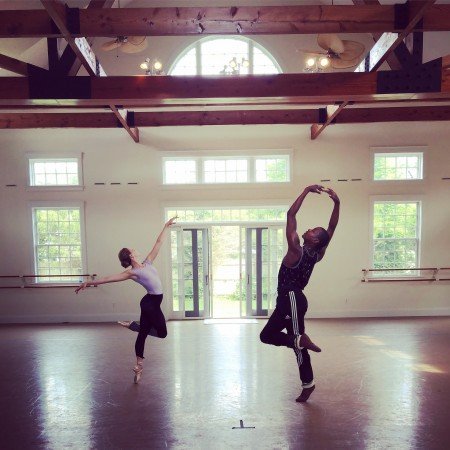 Everyone in the cast danced magnificently, but I was particularly impressed by Bradley’s remarkable extension and attack, Mejia (who has quickly established himself as a major presence at NYCB, albeit still a relatively new member of the corps), and most significantly by MacKinnon. She’s been a member of NYCB’s corps since 2013, but I’ve not seen her assay featured roles (perhaps I just missed those performances). MacKinnon’s performance here was revelatory: in contrast to the apparent frenzy (not inappropriate) that surrounded her, she was no less enthusiastic and competent, but seemed thoroughly poised and refined. I’ll pay closer attention next season.

Equally enjoyable, and the most polished piece of the three premieres, was Lopez-Ochoa’s Symbiotic Twin. The premise of the piece, commissioned by the company, is that “we’re all dual creatures made of contrasting energies, such as male and female,” and greater awareness of might create less division. As seemingly trite and obvious as that statement is, somehow Lopez-Ochoa has converted it into something memorable. 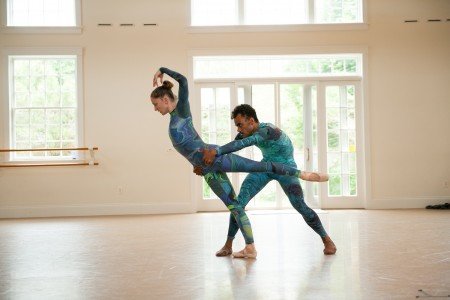 To Broken Rosary by Australian-born and Netherlands-based composer Kate Moore, a beautiful, mournful but hopeful piece of music played live by cellist Ashley Bathgate, and abetted by striking costumes by NYCB’s Marc Happel (based on paintings by Kathleen Werner) that appear, from a distance, like somewhat muted mosaic-like swirls of color (think Klimt), Lopez-Ochoa has crafted an exquisite contemporary ballet duet. The movement, largely confined to depicting connected “energies” within a relatively confined space, is disciplined but expressive, simple but compelling, and completely engrossing as the distinct male/female energies contrast and complement each other, and ultimately accept their two-pronged singularity. Brilliantly executed by Bouder and NYCB principal dancer Taylor Stanley, Symbiotic Twin has a heart – well, maybe a pair of them beating, ultimately, as one – and a soul. It’s a gem.

I reviewed both of the program’s other two pieces following the company’s program at Symphony Space last year. My evaluation remains the same – except Gerring’s Duet, previously performed by two women, was here danced by two men (Stanley and Johnson). As was the case last year, the piece initially left me cold, with the individual dancers moving as independent entities, arms extended in various directions as they moved from one related but unconnected pose to another. And as was the case last year, the piece eventually clicked, as I grew to appreciate its intellectual and physical rigor.

Bouder’s In Pursuit Of… is comprised of four individually titled “movements” based on cultural dances by the Maasai tribe of Kenya (“Warrior”), Polish Mazurek dancing (“Harvest”), Sufi dance (“Ceremony”), and contemporary dance (“Freedom”), all integrated into, essentially, a ballet framework. Unfortunately, the piece at this Joyce program was untethered from the program note that explained it (it appears that perhaps the program, which combined all five of the Festival’s offerings, didn’t provide sufficient space for it), so the significance of the individual movements might not have been apparent to members of the audience who had not previously seen it. But the end result, even without knowing its foundation, was the same – an enjoyable, multi-faceted dance, performed by the same cast who performed Alas-.

On the surface, it would appear that Ashley Bouder Project presented an evening of reasonably successful curiosities that might not normally be found on mainstream ballet company programs. But a look at recent commissioned pieces performed, or soon to be performed, by NYCB and other companies across the country shows that choreography and music created women and persons of diverse backgrounds is no longer a curiosity. Be that as it may, the quality of the dances on this program was particularly strong. Assuming that there will be another annual summer program by Ashley Bouder Project next year, I’ll look forward to it – and judging by the sold out, highly enthusiastic house, I suspect lots of other people will as well.