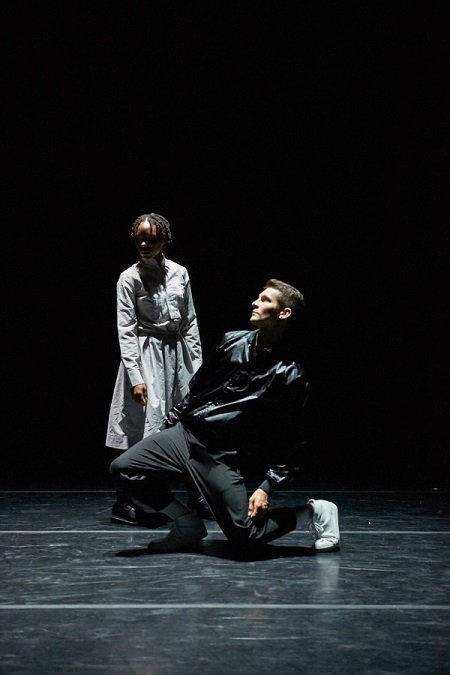 As Fernando Melo’s Re:play begins, a girl in a shin-length tennis skirt, crisp white blouse with a perky ponytail (Emily Proctor) strides athletically across the stage, lit only by a spooky searchlight zigzagging crazily around her. The lights abruptly black out, cutting off her image mid-stride. Then the same “girl in white” appears back at the starting point and does her striding pathway again. Like a film frame run through the projector twice, the picture has repeated exactly. The audience chuckles at the visual déjà vu. Midway along her path and at centerstage, the girl does a stately kneel, lunges and decorously falls to the floor, directly perpendicular to the audience (she repeats this phrase several times during the piece, perhaps denoting some ritual). Men in shiny, black knee britches and tunics start to criss-cross the stage. One of these fellows repeatedly does a crossing pattern, hesitates, looks back as though he dropped something. A tall, menacing man in a flappy, billowing dressing gown (Joseph Watson) thrashes on the perimeter. An ominous feeling of missed connections pervades, dancers pushing against unseen forces, and at times being controlled by them. All of this action is accompanied by a single, pinging piano note, creating a palpable tension, the mood murky and disjointed. Various tableaux appear, then vanish, like flashes of a barely remembered dream, or images glimpsed in windows at night, mysterious and unknowable. I was sitting on the edge of my seat, as I tried to parse a story from all these disjointed yet enthralling goings-on.

In one memorable sequence, Proctor stands centerstage and for several dizzying minutes, the other dancers lunge at her rapidly from every angle, one at a time, spinning her around, whirling her by the arms, slipping and sliding arms around her shoulders and waist. Caught in a human revolving door, she is powerless to escape this vortex. At the end, Proctor repeats her signature crossing/kneeling/falling sequence. The searchlight flashes momentarily away from her.  When it bounces back, she has vanished, like a footprint in the sand, there one moment, then washed away. Blackout. 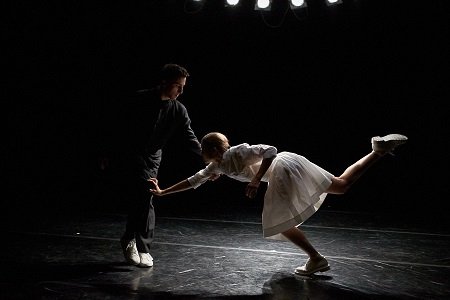 Re:play choreographer Fernando Melo (Brazilian by birth, European by training) has talked about the choreographic process of this piece. He stated in an online interview that the dance was “constructed and deconstructed” with a series of timelines or phrases. The theatrical elements – lighting (expertly designed by Sean Johnson), music (Zoë Keating, Ictus and Blindman Kwartet) and choreography are co-equal and combined in a “non-hierarchical way.”  “There is no story”, but the final element of audience interpretation provides whatever meaning might be gleaned. In some ways, this is reminiscent of the groundbreaking “chance” dance aesthetic of Merce Cunningham/John Cage pioneered in the 1950/60s. It differs, however, in several key aspects. Cage/Cunningham’s theatrical elements were combined purely randomly, there was no “collaboration” in a classic sense. The Re: play theatrical process appears more calculated. Also, the Re:play movement vocabulary is more emotionally or dramatically driven than the Cage/Cunningham approach. Like an aesthetic Rorschach blot, Melo has invited the audience to project their own narrative, fantasies, feelings onto the stage action. My own invoked a wayward Alice in Wonderland, a postmodern version resembling an avant-garde, silent film. I found Re:play fascinating, and look forward to seeing more from Mr. Melo.