I confess that I’ve taken an extended break from attending The Nutcracker. For some people, like myself, it’s the kind of ballet you can grow very weary of seeing. But for others, it’s a holiday season staple that never grows old. Of course, ballet companies in the United States cash in on the ballet’s popularity, making The Nutcracker an anticipated event each season. Families go to the theater together. Little girls often dress up and pose with their favorite dancers at pre-event fundraising teas. Young ballet students line up to audition for coveted roles, and some earn the chance to participate, scurrying around as little mice or prancing around in a party scene. For many, The Nutcracker is associated with special Christmas memories, and I do appreciate its power to continually draw audience members.

My Nutcracker memories are mixed. When I was young, I remember loving that a girl gets to be the ballet’s hero, but also feeling bored, especially in Act II, as it made little sense and seemed to last forever. My feelings haven’t really changed very much over time. The Nutcracker, though, is hardly alone among ballets in which Act II (or Act III) drags on due to the rather inexplicable presentation of endless, frequently ethnic-themed dances. 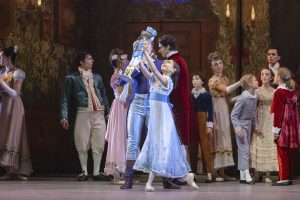 Like so many holiday traditions, The Nutcracker brings out various opinions in folks. I personally think it’s wrong to decorate a Christmas tree solely in ornaments and lights in the same color, but there are others who love this uniform look. When it comes to The Nutcracker, some have a preferred version that seems perfect to them, and thus in their eyes anything else is sacrilege. Atlanta Ballet’s new Nutcracker, choreographed by Yuri Possokhov, which debuted last year, puts some modern twists on the holiday favorite and tinkers with some timeworn traditions. It will delight some Nutcracker fans, and it will leave others marching out in a huff, as I observed on opening night at the Kennedy Center.

The Sugarplum Fairy? She’s outta there. And along with her, no Dewdrop Fairy, either, and no Snow Queen. For those who cling to these beloved roles, there’s bound to be disappointment. I can’t say for sure why Possokhov chose to jettison these parts. It could have been in order to streamline the story to concentrate on the central pair of Marie (or Clara, as I grew up calling her) and the Nutcracker Prince. Is it possible that  Atlanta Ballet didn’t have enough strong female dancers for those roles? In any event, for those stuck on the glamorous fairies, royalty in full tutus and tiaras spinning around and taking charge, the only one in charge in this new Nutcracker is Drosselmeier, a mysterious magician who influences everything that occurs. 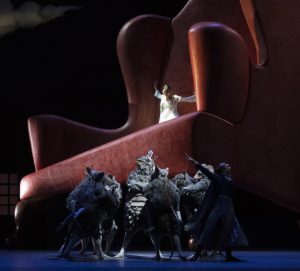 The ballet began with a prologue, which consisted primarily of an animated video (video design by Finn Ross) projected onto a huge scrim. It reminded me of a video game, and not in a good way. I got dizzy as the video quickly circled and dove, zooming into a village preparing for Christmas. There, Drosselmeier (Nikolas Gaifullin), a person, not a projection, loaded gifts onto a sleigh and then drove it off into the night sky. The interaction between the caped human figure and the animated sleigh was comedic, although I’m not sure it was supposed to be funny. To me, the melding of the live dancer and the video was awkward.

Things fared better in Act I, where Alex Tregre and Davin Grindstaff, as ice skaters, gracefully glided across the stage. Curiously, instead of teaching Atlanta Ballet company dancers to use inline skates, it appears the company nabbed outside experts for these parts, as well as for certain roles in Act II that called for gymnastics training (there’s a jungle gym-type contraption in Act II from which women called “Star Acrobats” hang upside down). Things on wheels made several appearances. In addition to the skaters, there were rolling cocktail carts, sleds, and a flurry of big, furry, creepy mice that propelled themselves forward on tiny four-wheeled dollies (even the basket for Act II’s Arabian Dance snake moved on wheels). 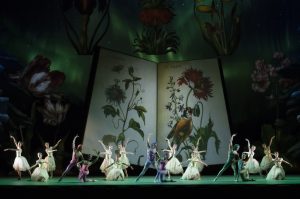 Atlanta Ballet in The Nutcracker, photo by Gene Schiavone

Anyway, Act I proceeded without too many surprises. The scenic design by Tom Pye and props and set dressing by Faye Armon-Troncoso added to the 1800s party atmosphere and to the magic that commenced. A theater and mini theater wondrously materialized, and an armchair and a cabinet grew so large that they towered over everything. The handsome costumes, by Sandra Woodall, showed off fur trimmed capes and fluffy muffs and glistening snowflakes. Young Marie (Atlanta Ballet 2’s utterly charming Remi Nakano) wore glasses. Drosselmeier at one point unwound a long blue ribbon from around the waist of her dress, fashioning the ends into puppet strings. It was more than a bit disconcerting considering our current climate. Certainly not a #MeToo moment! As the party goers departed, a sleepy well-bundled child slid off a sled, managing to be left behind briefly before his parents retrieved him — a flash of quaint humor.

Overall, Act I was entertaining enough, but the choreography was underwhelming. The Waltz of the Snowflakes seemed clunky. Dancers pointed their arms in different directions and looked like they were signaling planes on a tarmac. They also rolled on the ground, their legs sticking up into the air, which wasn’t exactly elegant. Spending time on the floor was another theme that stood out, and I found it choreographically odd. Having mice lurk low to the ground makes sense, but for many of the other characters, lying on their backs, legs akimbo, is shockingly unflattering and un-balletic. A small girl sitting in my row loudly mused, “Why is she not standing up?” 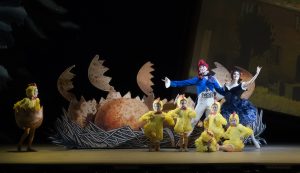 Atlanta Ballet’s Jacob Bush & Jackie Nash with their chicks in The Nutcracker, photo by Gene Schiavone

Act II began with striking lighting design by David Finn — green glowing streaks mimicking the aurora borealis. Here, Drosselmeier conjured up a cyclone of books (helped by video projection), and this reminded me of something out of Harry Potter. A huge book then took over the stage. Its pages, via projection again, flipped and changed. With each new story were new dances from different lands, a clever way to introduce the various ethnic dances. Among the dances from different countries, the French Dance stood out for its uniqueness and cuteness. There was no Mother Ginger hiding things under a big hoop skirt, but there were courting chickens (Jackie Nash and Jacob Bush), who provided the night’s deepest laughter. Plus, there were fluffy yellow chicks who after hatching adorably flapped their itty bitty wings.

Act II’s Flower Waltz was strange. The flowers didn’t look much like flowers, and the lead couples, “dragonflies” and “roses,” also looked peculiar. The male roses wore what resembled flowered swim caps. More importantly, the choreography for adult Marie (Airi Igarashi) and the Nutcracker Prince (Vitor Luiz) wasn’t very smooth. The pair make lovely couple, but even with the additional stage time, they failed to make a big impression when it came to their dancing. Poor Marie was unceremoniously tossed upside down over and over again, scissor-legged, amidst uncomfortable pauses. 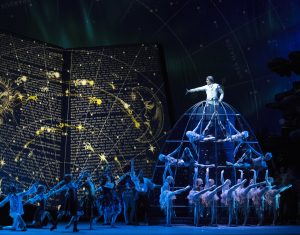 Atlanta Ballet in The Nutcracker, photo by Gene Schiavone

It’s clear Possokhov’s Nutcracker, with its focus on special effects, is meant to appeal to the younger generation, and maybe it does. But for those who favor a more traditional Nutcracker experience, one that spotlights great dancing, Atlanta Ballet’s production may not satisfy. There’s always Tchaikovsky’s music, which will swirl in your head long after the performance is over. Ari Pelto, complete with unruly conductor hair, skillfully led the Kennedy Center Opera House Orchestra.