Pre-professional programs in area ballet schools, whether or not affiliated with a major ballet company, are so good at what they do – and have students who are so good at what they do – that attending a seasonal or annual program presented by these schools to showcase its students and their accomplishments to date (and to get an advance look at potential stars of tomorrow) is prohibitive. But every once in awhile I can fit one in, and last Friday I attended the opening night of the Winter 2019 Performance at New York Live Arts by one of these highly-regarded schools: Ballet Academy East.

Even being well aware of BAE’s reputation, I was unprepared for the level of accomplishment I saw. 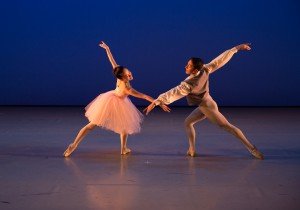 While a review of any such performance using the same level of scrutiny as a professional program, except perhaps a graduation performance, is unfair, given the caliber exhibited failing to do so would be unfair as well. Each of the program’s dances provided a clear indication that these young dancers exhibit extraordinary attention to placement and technical detail. More impressively, at mid-level and above, they add unexpected and sophisticated nuance, phrasing, and poise to their performances – including from those who do not function as the dance’s leads. Even if they only get to shine for a few moments, many of these young dancers already display evident individual character (a budding stage persona, if you will), that, beyond physical characteristics, distinguishes one from another. And although they obviously were well-prepared, they did not give the impression of being over-prepared dancing automatons, as sometimes happens if dancers (even professionals) are ceaselessly drilled. All these young dancers knew what they were doing, and did it with gusto.

The program featured six dances, spread across varying levels based on age and/or accomplishment, each one not just appropriate for their levels, but a stretch. That’s a good thing. When these student dancers rise to the occasion, as they almost always do, the sense of accomplishment and development of “stage sense” is all the greater. That was the case here. 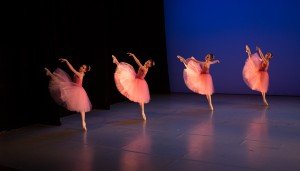 The program opened with a bang: George Balanchine’s Valse Fantaisie, staged by BAE’s Artistic Director and former New York City Ballet dancer, Darla Hoover. The dancers appeared to be relatively young compared to others in the program, but not the youngest of the levels (unfortunately, the levels of the dancers in each piece are not identified), so one might not expect the same level of stage and technical maturity that might be found in the older dancers. One would be wrong.

Led by Jenny Ku (identified in the program as an Angel Shine Foundation Scholar) and Santiago Jimenez Vargas, these young dancers (including Julia Applebaum, Malena Bhonslay, Penelope Birnbaum, and Sophie Kim) gave a lively, and thoroughly credible, performance. One might consider the possibility that Ms. Ku must really be a 25 year old whose physical growth stopped prematurely: no one really so young could have that amount of stage presence and composure. One would be wrong there too.

Balanchine, of course, is one of the greatest choreographers of the twentieth century. Alma Reiss-Navarre isn’t. Yet. She’s a 16 year old student in BAE’s pre-professional program, and in that capacity performed later in the evening. She also, quite obviously, knows how to choreograph.

Overlay is choreographed to music (not identified) by Astor Piazzolla, and I expected takes on what Piazzolla is famous for – tangos. To the choreographer’s credit, the dance recognizes the pulse of the music, but doesn’t fall into the trap of being obvious. Instead, Reiss-Navarre picks up on the music’s Spanish (Argentine) flair, and produces a ballet “overlay” that uses the music rather than being subservient to it. In the process, she puts her nine dancers through their ballet paces, and these budding ballerinas executed very well – and with flair of their own.

I understand that this is the second piece that Reiss-Navarre has choreographed for BAE. It’s obvious that she has the creativity and skill to take this artistic path if she so chooses. 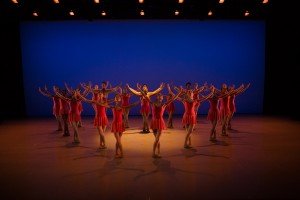 La Danze Curativa is on another level. Christopher Charles McDaniel, a former BAE student who, after performing with multiple companies across the country, is now in his second year with Dance Theatre of Harlem and on the BAE faculty. His dance is a multi-faceted, complex work of sensitivity as well as skill.

Loosely translated, the title means “the healing (or curative) dance.” My understanding is that McDaniel recently lost his mother, and that this dance is inspired by that, and is intended as an indication of love and gratitude. I don’t know if that’s correct, but instead of the usual linear patterns created in certain ballets by large groups of dancers, here the dancers assemble in and out of the form of a heart. It sounds maudlin, but it isn’t, and being unaware of McDaniel’s motivation doesn’t make a difference.

Choreographed to unidentified music by Alberto Ginastera, another Argentine-born composer whose work was used by Justin Peck to create his wonderful Estancia for NYCB, La Danza Curativa is divided into segments, presumably corresponding to movements in Ginastera’s composition (or excerpts from a compendium derived from multiple sources). Except for the beginning and ending, each segment highlights a subgroup of the large cast (six featured dancers – Pedro Alves, Makhila Cooke, Pierson Hall, Lola Cantu, Alex Mousa and Kylie Williams – and a corps of fourteen), within which a larger group may come and go. The initial segment is slow-moving, appropriate for what, in hindsight, is an introduction to his tribute, the second is allegro, and so on, and McDaniel skillfully alternates between male and female solos and small groups. To my recollection the final segment echoes the first. La Danza Curativa’s complexity was far beyond what one might expect in a student production (even pre-professional), and the young dancers, who by observation only appear to be on a level higher than those in the first piece, but lower than those in the piece that followed it, executed beautifully. Very impressive work all around. 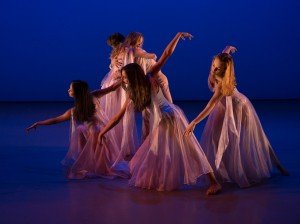 The second half of the evening opened with an even bigger bang than the first. Balanchine’s Tchaikovsky Suite No. 3 is one of my favorite ballets; Elégie is the first segment of it. Staged by Deborah Wingert, also a former NYCB ballerina, the young dancers who performed Elégie, who appear to comprise the most experienced and/or accomplished pre-professional level, didn’t so much copy NYCB dancers as they made Balanchine’s choreography their own: it was the same, but it was different – and that’s not meant as a derogatory comment in any way. Led by Emily Fretz and Kurt Grimaldi (noted as a David Howard Foundation scholar), and including Bianca Carnavale, Julia Isaacman, Anatalya Piatigorski, Gwen Vandenhoeck, Maddie Yeon, and Ms. Reiss-Navarre, these dancers added youthful spirit to one of Balanchine’s most sensuous, and memorable, dances. And special praise goes to Fretz and Grimaldi. Fretz added more passion to her role than I’ve seen in any number of professional presentations, and Grimaldi, in addition to commendable technique, displayed partnering skills often lacking in professional male dancers whose primary focus is themselves. Kudos to all involved.

Following a photo presentation that captured class moments featuring students and members of the faculty in class or rehearsal – which was far more compelling than a simple address to the audience could be, the evening continued with L’Arlésienne. To Georges Bizet’s familiar composition, Jenna Lavin, the school’s Principal and a member of its faculty, created this piece for what appears to be the program’s youngest dancers. While less complex than the other pieces on the program, that’s appropriate for this level, and Lavin’s piece showed them off to maximum advantage. The higher level of the students in this program is already evident in these fourteen young dancers, led by Viktoria Papakalodouka, Isamu Russo, Kiran Yeh, and Enzo de Oliveira Castilho.

The icing on the cake was the evening’s final presentation.

Former NYCB principal dancer Peter Frame, who died last September, was also on the BAE faculty. Elysium is dedicated to him, and I cannot conceive of a tribute as apt as this. Choreographed by Ariel Rose, a former BAE student and currently a member of Miami City Ballet, to music by Arcangelo Corelli, Elysium is a magnificent dance that might be fitting for a professional company, even though the presence of student dancers is essential for it to be as magnificent as it is. 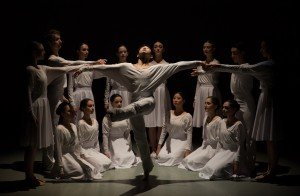 The fifteen dancers, who span age / experience levels (and all but one of whom performed in earlier program pieces), are costumed in white. One of them, a more experienced-looking young male dancer I had not previously seen in the program (not specifically identified, but by process of elimination I assume it’s Kyle Ikuma), is the dance’s central figure. The piece opens in relatively dim light, with Ikuma appearing somewhat dazed and troubled, facing the audience, staring into space. With Corelli’s late 17th – early 18th Century Baroque music, sounding like a heavenly sound symphony, serving as background ambiance, this central character is soon surrounded by many, if not all, of the other dancers. After several segments involving varying subgroups of the dancers, with Ikuma again highlighted in the center, the entire cast turns to face a bright central light emanating from a rear curtain that by descending degrees illuminates the entire stage.

Elysium can certainly be taken literally to represent the central figure’s pre-death confusion, or the arrival of a troubled individual into some post-death phase, wondering if his life was worth anything, and after being shown it was by the student / angels whose lives he touched, accepts his non corporeal destiny. Although this type of elegy has been done many times before, I don’t recall ever seeing it done with such complexity and crystalline purity. And it’s not at all saccharine; it’s celebratory.

But Elysium is more than that summary would indicate, and can be thoroughly appreciated even without knowing of any connection to Frame or any details of his life, simply as a work of dance art that is interestingly and coherently presented, compassionately and beautifully executed by Ikuma and the other BAE students, and that moves the soul. For reasons I can’t quantify, and not just because Frame died a day after he did, as Elysium progressed I thought of Paul Taylor. Rose has crafted a little gem.

BAE’s founder and director, Julia Dubno, its faculty and choreographers, and most of all its pre-professional students, deserve all the post-performance praise they undoubtedly received from relatives and friends, and at least one pleasantly surprised critic.