The Kennedy Center first hosted Ballet Across America almost a decade ago, in 2008. The series presented an opportunity to see ballet companies from across the United States, often small regional companies that rarely visit DC. It was originally curated in-house, by the Kennedy Center’s director of dance programming, Meg Booth, but this year the Kennedy Center “re-introduced” Ballet Across America by turning it over to two guest curators, New York City Ballet’s Justin Peck and American Ballet Theatre’s Misty Copeland. 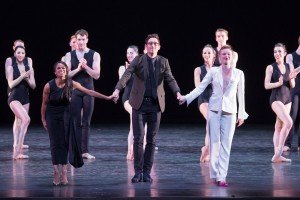 I wonder why this change was made, how Peck and Copeland became involved, and if they will be involved again in the future. Were others considered as curators, or were these two handpicked in an attempt to boost ticket sales by riding on the recognizable names of rising young choreographer Peck and popular African-American principal dancer Copeland? Peck and Copeland are currently enmeshed in the world of ballet. Wouldn’t the temptation be to select close friends to perform, versus searching broadly throughout the country for innovative works by ballet companies that are often overlooked? What I loved best about the prior iterations of Ballet Across America was seeing interesting works by ballet companies evidently selected on the merits. What criteria did Peck and Copeland use, and were they given any guidance? I don’t know how Peck and Copeland’s choices came to fruition; however, Copeland stated that she sought to highlight diversity, while Peck reportedly sought to highlight creative freedom within the context of classical ballet. I have no objection to these goals, but what results when a professional curatorial perspective is swapped for that of popular figures presently within the ballet realm?

The opening night gala celebrating Ballet Across America gave me a few clues about what was to come, but not many. Sara Mearns, a current New York City Ballet principal dancer, served as the evening’s host. Why would the Kennedy Center invite a current dancer, rather than someone with extensive hosting experience, to kick off Ballet Across America? Could this also have been for the purpose of boosting ticket sales? Opening night was overflowing with ties to both NYCB and ABT. Shouldn’t the opening night of Ballet Across America be less about promoting already hugely successful dancers and ballet companies and more about giving talented artists who have had less attention a chance to shine? Yes, some lesser known dancers and choreographers took the stage on opening night, but with NYCB and ABT affiliated dancers so obviously in the driver’s seat and exerting such heavy influence, the message seemed to be that the others were lucky to be there. 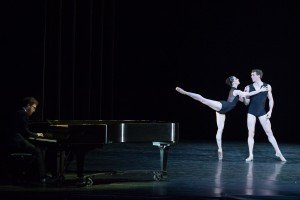 Mearns appeared in a white pantsuit, which I couldn’t help but associate with Hillary Clinton, yet what Mearns said was laced with repeated references to “American,” “American,” “American,” such that she sounded like she was a member of the Trump campaign. It makes sense that this year’s Ballet Across America, which coincides with the Kennedy Center’s JFK Centennial Celebration, would focus on pride in American ballet, but the speeches seemed awkwardly focused on America at the expense of celebrating the actual artists selected by the guest curators. 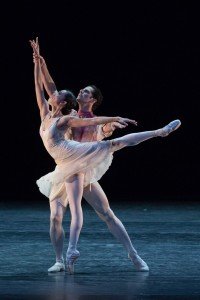 Easily the best piece on the opening night program was the pas de deux from The Leaves Are Fading, choreographed by Antony Tudor and danced exquisitely by ABT principal dancers Stella Abrera and Marcelo Gomes. Everything about this performance was achingly lovely. What a lesson in perfection! But how, exactly, did it fit in the celebration? Tudor is not an American choreographer, and neither dancer is part of a company selected for the Ballet Across America series. 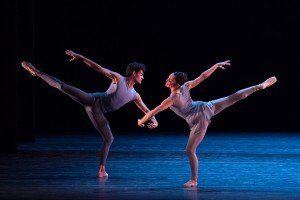 Only one work during the opening night gala was an actual Ballet Across America pick — Nashville Ballet’s Concerto (which will be reviewed separately as part of Copeland’s curated program). And only on opening night was the pianist for Concerto the popular musician/composer Ben Folds. Two opening night pieces, Imprint/Maya and Garden of Dreams, were by choreographers featured in the program curated by Copeland — Dwight Rhoden and Jeremy McQueen, respectively. One piece, Chutes and Ladders, was choreographed by Peck, who conveniently included his own work in the program he curated. Miami City Ballet principal dancers Jeanette Delgado (sister of Peck’s girlfriend, former Miami City Ballet principal dancer Patricia Delgado) and Renan Cerdeiro danced Chutes and Ladders adeptly, but this cute pas de deux paled in comparison to the earlier pas de deux performed by Abrera and Gomes. 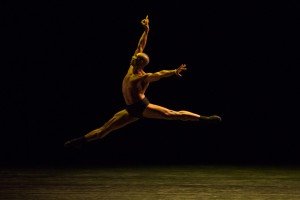 Rhoden’s opening night work, Imprint/Maya, a solo, was danced beautifully by former Alvin Ailey and ABT principal dancer Desmond Richardson. The deeply touching words by Maya Angelou and vocals by Melanie Nyema are jarring. Richardson’s dancing was powerfully personal, but the jazzy female voice that narrated his movement was sort of incongruous with the serious subject matter (slavery).

McQueen’s short piece, Garden of Dreams, a world premiere, was commissioned by the Kennedy Center and was performed by students of the ABT Jacqueline Kennedy Onassis School. Among the student dancers, Kangmi Kim stood out as extremely polished and pleasant to watch. Garden of Dreams, though, was bland, as was the short film that preceded it, At This Stage. The film, also commissioned by the Kennedy Center, was directed by Ezra Hurwitz, a former dancer with the Miami City Ballet. The film featured ABT’s students as they talked about their lives as young aspiring professional dancers. The dancers chatted a little, laughed a little, goofed around a little, and rehearsed McQueen’s choreography, but there was nothing remarkable or very insightful about the short film. 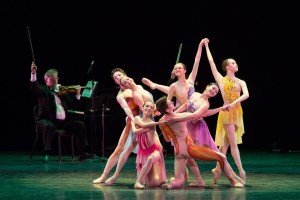 The Kennedy Center commissioned a second film from Hurwitz, Now More than Ever, which is also rather unremarkable. It’s basically a slick commercial for the Kennedy Center showing off a small group of attractive ABT dancers (Abrera, Gomes, Isabella Boylston, Calvin Royal III, and James Whiteside) flitting around inside and outside the Kennedy Center complex. They leap through the red carpeted hallways and theater aisles, and even dash across the rooftop, but other than spotlighting a bunch of dancers looking pretty, the film doesn’t amount to anything. It appears to be simply an ad touting dance at the Kennedy Center. This film/ad began each of the Ballet Across America performances.