Ballet Across America: Program Curated by Justin Peck
Hearts & Arrows, Year of Our Lord from Year of the Rabbit, Fool’s Paradise, The Gettin’

The Ballet Across America program curated by Justin Peck adhered more closely to traditional classical ballet than did Misty Copeland’s curated program. Another striking difference — Peck’s program featured choreographers who are already widely recognized and whose works are regularly seen. In that sense, Peck’s program held few surprises, with the possible exception of Kyle Abraham’s The Gettin’, which would have fit in well with Copeland’s program and goal of highlighting diversity in dance.

Perhaps ironically, The Gettin’, which departed furthest from tradition, was the work that appeared to get the warmest reception. From the moment it begins, its humanity is apparent. Racism is the topic, but it’s a conduit for examining what we share as human beings, not what divides us. The jazz music, Robert Glasper’s interpretation of We Insist! Max Roach’s Freedom Now Suite, performed by Vincente Archer, Kris Bowers, Otis Brown III, and Charenee Wade, is central to the work. Indeed, the musicians remain on stage throughout. Their artistic expression is as important to the dance as the dancing. 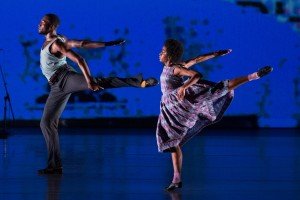 Wade doesn’t steal the show, but she’s capable of it. Her vocals permeate and punctuate the performance. She’s as much a storyteller as the dancers are. The set design by Glenn Ligon, lighting and video design by Dan Scully, and costume design (I particularly liked the women’s 1950s length dresses) by Karen Young, are understated and very effective. All of these production elements enhance the dancing without drawing attention away from it.

Abraham’s choreography is both large and small. The dancers cover a vast amount of space as they leap. But often the tinier movements are of equal or greater interest. A dancer’s hands rattle at chest-level, shaking with rage and reaching desperately for hope. A head shakes. In a solo, Connie Shiau rips violently through the air and pierces hearts. 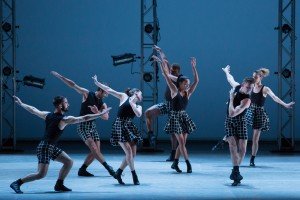 Hearts & Arrows, performed by L.A. Dance Project and choreographed by its Artistic Director Benjamin Millepied, opened Peck’s program, and it kept me curious throughout. I don’t care for Janie Taylor’s costumes, black sleeveless tops and bottoms with a big black and white window pane print — five men in long tight shorts and three women in pleated schoolgirl skirts, plus black ankle boots. Although lovely, music by Philip Glass, in this case String Quartet No. 3 (“Mishima”), is used so frequently for contemporary ballets that I’ve grown tired of it. I discerned no connection between the dancing and the life of Mishima, a famous right-wing Japanese author who disemboweled himself in a suicidal protest. Nevertheless, Hearts & Arrows won me over with its inventiveness and quirkiness.

Hearts & Arrows consists of six short vignettes, with blackouts in between. Millepied is not afraid of repetition, and that’s a good thing. Repetition helps the choreography cohere, and it rewards the viewer with second chances to enjoy specific movements. The dancers walk backward several times, then are pulled forward again. There’s a motif of changing direction, of abrupt stops and starts, of momentum, that’s really fun to watch. It’s almost as if there are unseen waves moving the dancers around, swallowing them, and then welcoming them again. A dancer is tossed high into the air, and later tossed once more in the same way. I imagined an ocean disgorging her repeatedly. At other times, a dancer is literally pushed down, forced to the ground for unknown reasons, and then rises in the next section. Similarly, a dancer who was aloof from the group becomes incorporated when the lights come up, and the dancing reassuringly continues. Does the title speak to the ups and downs of personal relationships? 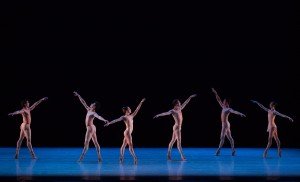 Christopher Wheeldon’s Fool’s Paradise, performed by the Joffrey Ballet, is an attractive piece. The pale peach, nearly nude costumes, by Narciso Rodriguez, are stunning. The bare arms and legs of the women and bare chests of the men show off the dancers’ musculature. For me, however, despite its indisputable beauty, Fool’s Paradise runs cold. Maybe it’s meant to be that way? The ballet reminds me of architecture, especially in its carefully placed and built layered lifts. A female dancer is positioned between two males. The man standing behind grasps one of her feet and one arm. With her bent limbs aloft, she looks like she’s ready to swim. In another intriguing lift, a woman rests on a man’s back with one of her legs draped in front of his shoulder.

I could have done without the fluttering bits that intermittently fall from the sky behind a scrim. At first the bits resemble moths, then later coppery leaves. I’ve seen too much stuff raining down lately in ballets, and Fool’s Paradise doesn’t need the distraction. The dancing speaks for itself. The choreography is full of sharp long lines and also softer elegant shapes. Wheeldon gives the dancers room to breathe, to linger and stretch, and thereby gives the audience time to absorb and revel in the movement. 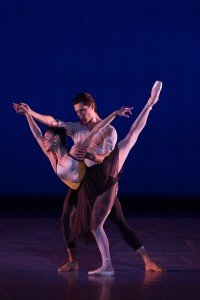 Patricia Delgado and Jovani Furlan in “Year of Our Lord” from Justin Peck’s Year of the Rabbit, photo by Teresa Wood

Packed in the middle of the program was a pas de deux by Peck, Year of Our Lord from Year of the Rabbit. It’s one of the better duets I’ve seen choreographed by Peck. It was performed by his girlfriend, Patricia Delgado, and Jovani Furlan, of the Miami City Ballet. If you’re asked to curate a ballet program, is it in bad taste to include a work of your own, danced by your girlfriend? The inclusion of his own work appears to send the message that Peck thinks he belongs in the company of the others on the program. I disagree, however, that Peck is at the level of Millepied, Wheeldon, and Abraham just yet. The pas de deux, although nicely done, is slow and plain and looks more like poses strung together than a duet with direction and flow.